Match-3 games are often adrenaline-fueled experiences with frantic, jittery gameplay. But can it also be meditative when you're rushing against a timer? Casual Box Studio has set out to prove it can, and produced a lovely little gem in Geisha: The Secret Garden, the match-3 version of a Zen quest. 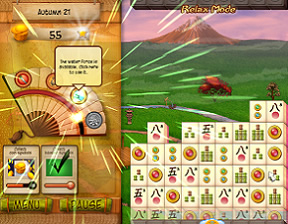 The game begins with the lovely Natsumi, your guide through the seasons. She will explain the basic gameplay and then you're off through a map with each section a different season, starting in summer and working your way towards spring. This is not, however, your classic match-3. To begin with, you are matching mahjong tiles. You can also only move a tile in a horizontal direction. To compensate for this, you can move a tile as far to the left or right as you want, and you don't have to make a match every time you move a tile. This gives you room to shuffle things around on several rows to make horizontal or vertical matches. Unlike other match-3 games more tiles do not fall down from above. In fact, you are working with a moving stack of tiles moving upwards! You not only need to make the matches to correspond to that level's requirements, but you need to keep the stacks of tiles from slamming into the ceiling, which will cause you to fail the round even if there is more time on the clock.

Fortunately, in each round you are earning both coins and stars. The coins you will use later in the second part of the game, garden building, but the stars are helpful because accumulate enough of them and you can use them to buy dragons. Lucky dragons which can extend your playing time, help you accumulate more money, or keep your tiles from crashing into the ceiling. You also accumulate power ups along the way; ones that can blow away a row or column, or others which can break one tile, shower meteors on several tiles, cause a tsunami that will take out an entire row, or an earthquake which will remove all of one type of tile from the board. Making this match-3 game even more unique are the obstacles that jump into your path, from bees which once they alight keep you from moving particular tiles, to tiles that are covered with the debris of the season. Watch out for frozen tiles in the winter! In most match-3 games, making a match with a frozen tile will break the ice, but in Geisha: The Secret Garden the opposite happens; making a match with a frozen tile will freeze the entire match, blocking off even more of a row or column. The only way to get rid of the frozen tiles is to force them to fall, which will break the ice that surrounds them. 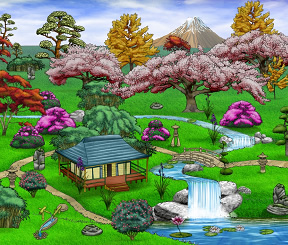 The loveliest aspect of the game, however, is the garden building in-between rounds. You begin with a choice of two backgrounds, each lovely in their own way. With the coins you gain from the match-3 rounds you can buy decorations for your garden from a menu of 16 different items; flowers, bushes, trees, and decorative items such as stones, lanterns, bridges, etc. Each item has a beginning stage, an intermediate stage, and an advanced stage that can be upgraded with even more money. The bridge, for instance, can be simple stepping stones, a low wooden bridge, or a high, ornamental concrete bridge, whichever you choose. The plants range from young and simple to old and elaborate as well. With the different stages this leaves the player with 48 different choices of decoration to create your own Zen space. Stick with a few simple items or go hog wild with everything, it is up to you.

Analysis: Companies are constantly trying to make this well-known genre different or interesting, and Casual Box Studio has definitely succeeded with Geisha: The Secret Garden. The strange movement dynamic and even stranger obstacles move the game into more of a hybrid match-3/mahjong game than a straight match-3. Strategy is key, forcing the player to really slow down and contemplate before making a move. Fortunately, if you can't think that fast on your feet there is a more relaxed, untimed mode to play instead.

The artwork is stunning, reminiscent of classic ukiyo-e woodblock prints of the mid 19th century. Quiet, Asian-influenced music and cool incidental sounds (like the buzzing of the annoying bees) rounds out a lovely experience. This is something you rarely see; casual gameplay as meditation, but this French company pulls it off well. 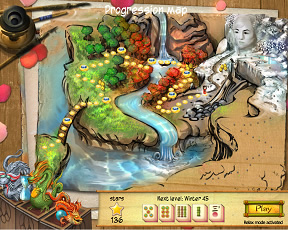 Is there a downside? Well, it can take a while for players of classic match-3 to get used to the new strategies involved, but the learning curve is gradual so most should be able to assimilate the new style quickly. With 80 regular and 16 bonus rounds, there's a lot of playing time to be had. Fortunately, each round ups the difficulty with different configurations, multiple difficulties, and increasing requirements to end the round, keeping the gameplay from becoming stale or repetitive. And once you finish all 96 rounds and have your garden just the way you want it? There's a tool which will take a snapshot and put it in your image folder, allowing the player to use it as lovely desktop wallpaper. Want to make a completely different garden? Just start all over again with a different screen name.

If you love match-3 games and are looking for a new challenge, then Geisha: The Secret Garden is definitely for you. With an entirely new strategy to learn and innovative obstacles to overcome, the game manages to make the genre feel entirely new and interesting. With its timed and untimed modes we're talking casual gameplay that everyone can enjoy. Close your eyes, take a deep breath, listen to the sound of one hand clapping, and start meditating now.

Dang, I'd love to try this, but it's Windows only. Still, the idea sounds good, maybe when I get Parallels or Crossover I'll see if I can get this one.

...So you can slide panels-- er, tiles-- left and right as far as you'd like without making a match, and the panels slowly push up from the top of the screen?

Been there, done that. Isn't that better known as Puzzle League (Tetris Attack, to some)?

I'll probably be ninja'd on this one, but here goes: Isn't this just Panel de Pon/Puzzle League with a wider board?

I'm not trying to discredit the game (I'll try the demo out before I post my opinion) but I feel that the obvious inspiration should at least be mentioned. It's not just that the gameplay here is similar to Panel de Pon - it's identical.

But again, I'll at least play the demo before discrediting the game itself. The extra fluff (special tiles, zen garden etc) might make it more interesting, and it might not. We'll see...

Hi all, I'm David the designer and lead programmer of the game.
You're all right, the mechanism is fully inspired by PnP (Tetris Attack). The game remains to be an original variation on the theme, and the pace and the spirit is very different. The user interface too, based on mouse slide and not a "switching" selection box, making the game usable by casual gamers.
I didn't mention the reference in the credits (as the thousands Bejeweled clones do) but I tried to not be "another bejeweled", I hope you noted the effort :).

Yes, the dynamic is very similar to Panel de Pon, thanks for Saedren and Lavos for pointing that out. The review has been updated to reflect this information.

Enjoying the game so far - I am rather new to match 3 so am liking the format of this game. Please tell me how to upgrade the tea house and bridge - I keep buying the base and am not able to get the upgrades to complete the buildings.
thank you

okay, I've figured out how to upgrade, but - now I am stuck at winter 60 - has anyone passed this level??? Best I can do is 6 more long matches before time runs out

I bought Geisa the Secret Garden a few days ago. I read on Big Fish Games you may be doing a part 2?!??
I hope so!

My wish list for it:
birds and butterflies
If I choose to buy something and then change my mind, would like the option to delete it and of course get my money back.
more background choices
This is the most relaxing game I have played in a long time!
Thank you so very much!!!!!
Gloria