Forgotten Riddles is back with a brand new installment that breaks new ground: Forgotten Riddles: The Moonlight Sonatas. The first game in the series introduced riddles that must be solved in order to know which items you were looking for and adhered to the hidden object formula quite readily. Moonlight Sonatas takes the game even further from the genre norm with more riddles, more puzzle-based games, and several new kinds of scenes that add a little liveliness into an otherwise still game. 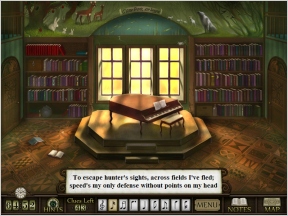 The once-famous Moonlight Opera House was home to legendary composer Francis von Amadaeus. The mansion has been abandoned for many years, yet people report strange music playing from within the haunted walls. Some even claim a gaunt figure can be seen standing on the balcony during the full moon. The town of Godesberg gives you full access to the opera house (along with the composer's documents which contain dozens of riddles) and tasks you with uncovering the mystery behind these strange occurrences.

Hidden object fans won't feel too out of place when playing Forgotten Riddles: The Moonlight Sonatas. Early scenes are fairly straightforward and present you with a room full of objects just ripe for the clicking. By choosing one of the symbols at the bottom of the screen you can read one of a number of riddles. Each is a clue to an item in the scene, all you have to do is decipher and find it. Most riddles are fairly straightforward, but a few will require some thought. 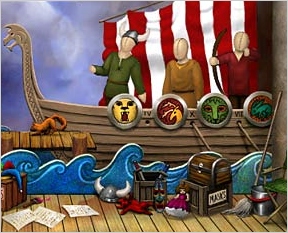 The real fun of the game comes with the variety of scenes you'll encounter that make good use of the riddle system. One room in the opera house, for example, features a series of clues about paintings on the wall, almost like playing a game of Guess Who?. And some scenes challenge you with placing objects from your inventory back into the environment which dynamically changes as you add things. Afterwards you go on a riddle hunt and must switch between original and "secret" scenes to find all of the objects.

Analysis: Forgotten Riddles: The Moonlight Sonatas departs from both the hidden object formula and the set-up of its predecessor, The Mayan Princess. The new direction isn't radically different, but the changes are there and they're quite welcome. The game is much more lively than most item hunting titles, and using riddles to determine which objects to find is loads of fun.

Even though there are mini-games, puzzles and several types of scenes to encounter, The Moonlight Sonatas still suffers from a bit of repetition. There's only so much you can do with a dark, dreary opera house in the hidden object genre. The story, while interesting, isn't woven into the game as intricately as it could have been, lending a sort of tacked-on feeling.

Despite its minor flaws, Forgotten Riddles: The Moonlight Sonatas is a superb title that will please fans of the series, hidden object aficionados, and casual gamers in general.

Ouch! i usually love hidden object and puzzle games, but i must be feeling particularly dense on this game! I can't even work out the initial page puzzle with the 4 "doors" of the seasons. So much for my free 1 hour download,I have 20 minutes left and not a clue as how to proceed.....

there are clues to the door puzzle right above them ;)

have a look here, if this is not the right puzzle, please tell me the stage and the room name and I will love to help you.

A complete walkthrough will come soon here on JIG

~ click on the left painting on the hand, in the middle of the sun - the painting dissapears, you see some stone legs.

~ on the left side of the second painting and on the right side of the third painting, you see instruments. Below this instrument bars you also see an angel - the left one shows a flute, the right one a harp. So you know now, that left the windinstrument have to be placed, right the string instruments. Change them by clicking one at a time each side. When you are done, the fourth painting dissapears and you see the a right arm

~ collect the four diamonds, laying around and place them into the empty spots of the second painting. The painting dissapears and you will see an angels body

~ click on the red carpetpart on the floor, that leans at the pedestal. It will dissapear and give free the Name Francis von Amadadeus and the first letter appears in gold. Now click the upper leaf in the middle of the painting, till the letter changed to an F. Do the same with the middle leaf (V) and the one below (A). The painting dissapears and you will see the wing.

~ Now click the legs from the left side and place them on the pedestal. Place also body, arm and wing of the angel. When you are done, at the top of the scene, a key appears. Click it.

I'm stuck at the puzzle of the fireplace with all the gears. I'm left with the metal rod,
clock hand and hammer. What do I do with them to finish rhis puzzle? Thanks

I got to the end and can't restart the game. Every time I hit a button it brings me to the end, How do I start a new game?

Does it also happen, when you try to make a new profile?

I put in a new name and it worked. But shouldn't have to do that every time.

I solved the entire puzzle of the hammer, clockhand and metal rod. I also finished the game. It was good fun but the story was rather sad and tragic.