In 2009 we first met the Flux family, and now the time has finally arrived to uncover even more of their secrets. Flux Family Secrets: The Rabbit Hole continues the story of Jesse, a young woman who discovers her real family may be stranger than anyone else's. (Yes, even your Aunt Marge who insists you set a plate for her poodle at the dinner table.) Following the events of the first game, Jesse is stuck in the past, and has no idea how to get home. Fortunately, with a little help from you (and, um... herself?), she can set history straight and return to her own time. And, if you have the computer capabilities, she'll do it all in glorious high definition. Yes, that's right; this hidden-object/point-and-click hybrid is the first true HD title from Big Fish Games. Please note that this game is currently only available as a Collector's Edition; the standard edition will be available in a few weeks. 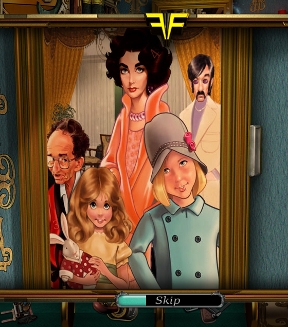 The gameplay revolves around melding standard object hunting with old fashioned point-and-click concepts. Within each chapter, you're given a goal, and you can keep track of what you need to find at the bottom of the screen. (Or click on your current companion for a hint!) The hidden-object hunting is split into two categories; tracking down parts of an item in an area that you need to combine to progress, and standard hidden-object scenes. You'll also have to keep an eye out for objects in the environment that you can simply pick up to be used later. For your searching convenience, the game also offers the ability to skip puzzles, and a blink-and-you'll-miss-it hint option, but don't worry; both timers refill very quickly. You can also click on the magnifying glass in the tool bar so you can get a close-up view of areas... which, more than likely, you'll need to do to track down certain pieces.

As Jesse, you'll travel through time trying to make sure events happen the way they're supposed to; you'll find yourself, for example, ensuring Lincoln gets to give the famous Gettysburg Address, or that Henry Ford winds up making cars, not watches. This sort of means that you have to either be American or a history buff to really get the most out of certain sequences, but even if you're neither the game never stops being fun. In between fixing history, you'll get to explore more of the Flux mansion, and uncover the truth about Jesse's unusual childhood... and, maybe, her sister's bad attitude... 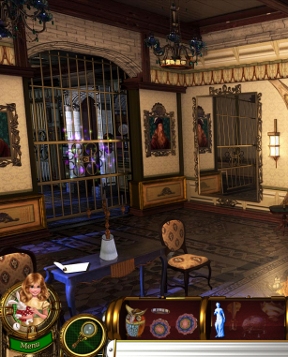 Analysis: It's been a little over a year since we first met the Flux family, and apparently the answer to "So what have you been up to?" is "Why, making ourselves fabulous, darling." Even if you don't possess the monitor or graphics card capable of rendering the game in high definition, The Rabbit Hole still looks pretty luxurious. Environments are detailed with period-appropriate items, and For me the biggest standout of the presentation is actually the music. Audio tends to get overlooked in most casual games, I think, and The Rabbit Hole features a lovely orchestral soundtrack made up of several pieces that are very easy on the ears.

Flux Family Secrets definitely has a Disney-esque vibe to it... specifically, it's a little bit Meet the Robinsons, at least in spirit. There are times when some of the notes you find left by members of the Flux family are surprisingly poignant, and I wish there were more of them. Frankly, the workings of Jesse's unique clan are more interesting than the edutainment the game likes to offer up in other chapters. And yet, despite that, you still manage to stay invested in the story, largely due to the interesting characters and setting... what? If all this happened to Jesse when she was a child, why doesn't she remember any of it? Well, listen, it's not that simple. There's all this... wibbly-wobbly... timey-wimey... stuff... Look, stop asking silly questions! 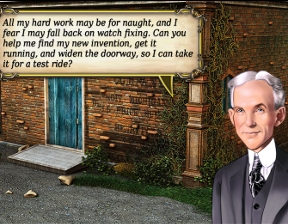 But while it's gorgeous and engaging and all that jazz, it's also not very long. Or at least, not as long as you might hope. The game encompasses twelve chapters (with six "bonus" chapters in the Collector's Edition), and you'll probably find yourself going through them quite quickly. A big reason for this is that the difficulty is very hit and miss. The puzzles tend to be fairly simple, but some items can be ridiculously hard to find in the rest of the gameplay; it's not uncommon to reach for a hint and find that what you're searching for was only visible by a corner poking out from behind something else, or simply just small, thin, and tucked away into a dark corner. The hidden-object scenes do seem to get a little lazy the farther you go; one asks you to find eight coffee cups, four Brussels sprouts, four liberty trees, and three mallets as part of its list. Really? These are bumps along an otherwise smooth road, but they're still worth mentioning.

While Flux Family Secrets: The Rabbit Hole isn't perfect, it is an extremely fine example of the genre. If you were a fan of the original, this return to the unique Flux clan and varied locations won't disappoint. Even if you haven't played the first, The Rabbit Hole will manage to hook you from the beginning. You can probably expect to spend around four to five hours on the game, and don't be surprised if you're left wanting more.

A Collector's Edition is also available. It contains six bonus chapters, the game's excellent soundtrack in MP3 format, and a built-in strategy guide along with some miscellaneous extras. Remember that Big Fish Game Club Members pay only $13.99 for Collector's Editions (or 2 club credits), and collector's editions count 3 card punches of 6 total needed for a free game.

Chapter 4: Down The Rabbit Hole

Chapter 6: Lincoln At The Train Station

You finally made it to the wharf but will have to row the dinghy out to the Beaver.

Special thanks to Jazz for this kicking walkthrough!

Thanks again to Jazz for the bonus supplement!

I loved the first Flux Family Secrets and this one sounds good too. I have never gotten a "collector's edition," not even of Dire Grove, but I am tempted here.

Dora, your reviews are objective and priceless in some of the lifestyle savvy you have. You write conversationally for your readers. Thanks, so much, Dora.

I'm tempted to get the "collector's edition", but $20 feels too much to spend on a game that only lasts 4-5 hours.

Wow. I really appreciate the "Timey-wimey, wibbley-wobbley...stuff" allusion to Dr. Who. Keep it coming!

Chapter 4: Down The Rabbit Hole

Chapter 6: Lincoln At The Train Station

You finally made it to the wharf but will have to row the dinghy out to the Beaver.

Special thanks to Jazz for this kicking walkthrough!

Thanks again to Jazz for the bonus supplement!