Casual games built around sets of mini-games are gaining popularity, as are pared-down strategy titles that keep the spirit of the genre intact while trimming the bloat. Then something like Floating Kingdoms comes along and somehow manages to combine both: a simplified strategy game that's one part resource management, two parts mini-games. And it does it in a light-hearted, fun kind of way that just about any age group can enjoy. 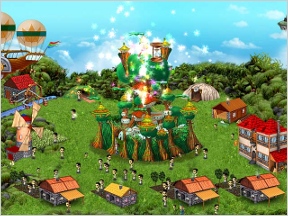 Cornelia is an apprentice of the Chief Imperial Architect, Sancho, who is working to help restore the kingdom's floating islands to their former glory. You do this by harvesting resources, building structures, feeding the people, and helping them erect a palace on their small chunk of land. Wood, stone, and gold (and, indirectly, food) are your currency, and you'll need special buildings in order to increase your stockpile of each.

Where Floating Kingdoms differs from other real time strategy games is how you collect resources. Think clicking on a tree is all you need to do to gather some wood? Try playing a round of mahjong instead. Want flour to make pizza to feed your hungry villagers? Head to the mill and play an arcade-style shape matching game. Floating Kingdoms employs simple mini-games to make earning resources surprisingly fun. A handy orb system allows you to set a building on auto-pilot, preventing that icky feeling of "Oh, can't I just have some water without playing a marble popper?!".

A number of other events add a little spice to the mix, such as pirates demanding a tribute, but on the whole the game is centered around earning resources by playing mini-games and spending them on building new structures. Simple, and just different enough to work! 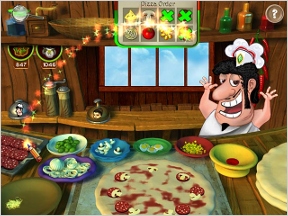 Analysis: Less strategy and more mini-games, Floating Kingdoms uses elements of the RTS genre to tie the puzzle/arcade games together and give you a good reason for completing them. It's similar to the way Puzzle Quest: Challenge of the Warlords makes gem swapping fun by assigning more meaning to the simple task.

The chief drawback in Floating Kingdoms is the lack of difficulty and the game's habit of holding your hand through every little event. It's obviously an attempt at making the strategy/sim experience more digestible, but with dialogue boxes and tutorial help screens popping up all over the place, you never even get a chance to chew. Only when you're well into the game does the hand holding stop, and by then you've already mastered the nuances of the game.

Floating Kingdoms had the chance to sprout a new genre-straddling trend, but it just slightly misses the mark in a few areas. The visuals pack a lot of imagination into their limited animations, but the mini-games could be a little more creative. Despite the minor bumbles, the game is still a fresh experience that's both fun and interesting to play. And because of the simple premise, it's the perfect title to bring your kids in for a helping hand.

This is a good game and a great concept. There should be a lot more games like this about.

Only issue I have with the game is the constant pop ups telling you what to do (this really isn't necessary past level 2!) and also the fact that the later levels don't really pose any extra challenge to the earlier ones.

The graphics bothered me at first, but then I got used to it, I guess. In my 1 hour of playing it, I never really enjoyed it. A storyline is fine too, but I can't tell you exactly why I didn't like this game.

The quarry game quickly became my least favorite, though. I'd have an orb on it as often as I could! I don't like how the ball is programmed to move differently from every other breakout game I have ever played. No control of where the ball moves whatsoever makes the game as boring as a mandatory game of roulette (or some other game of luck) that you have to constantly play.

Loved the concept, but hated the mini-games. Both the Puzzle Bobble and Match Three knockoffs had multiple items that looked near-identical but were meant to be distinct, and the Breakout game, as Reibear said, had no player input.

I sometimes wonder if some casual games are tested for bugs but not for "funness". Even an infrequent casual gamer could've pointed out the design flaws here.

Im one of the team members behind the game.
Some of you tell about the "constant pop ups telling you what to do (this really isn't necessary past level 2!) ". Its a game without any previous experience. The early versions made a gameplay with more challenging, but our target players, and target testers had some notes on "not to understand how to play the game". (There was less help, more challenging in minigames...for example the quarry was reenginered a few times..becouse thats was "too hard"). After these tons of tester notes on the hard understanding of new, never seen before elements in gameplay, we changed all the gamedesign and made this more user friendly, but less challenging version. Its was a design method of entertaining instead of challenging, for example its a perfect game to play all the family together. Its was really a hard thing to engineering a complex game like FK to the casual core audience, which is owerflowed with copycat game mechanics , like hidden object games. Its very hard to show something totally different, but still enjoyable to this community. If you drop them into the deep water, they are abandon the game, and exit after the first 15 minutes...if we give some more helps, there arent enough challenging :) ...I think our next game will be something more conservative!
.
I wish you all a very happy new year, and have fun playing Floating Kingdoms.

CatHead - if there is a lesson to be learned here it is this: it is impossible to create a "one-size-fits-all" gameplay experience.

tutorial or "easy" (default): for those who have never played before. This mode will provide less challenge and more hand-holding to get the player familiar with the game, its mechanics, and all the mini-games.

advanced or "normal": for those who require a bit more challenge, or who like to figure things out for themselves. This mode will provide less hand-holding and a greater degree of difficulty in all aspects of the game.

I commend you on your desire to go your own way and not create yet another casual clone. This is likely why your game was chosen for review here at JIG!