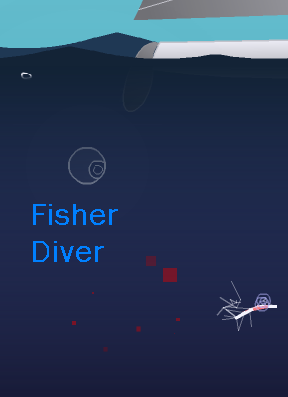 Recently, we've seen a bit of a mini-renaissance of quality casual releases set underwater, defying the conventional wisdom that games get terrible when they go down the drain. Fisher Diver, an action game by Eli Piilonen, keeps the quality but darkens the tone. On its surface, it's a retro-styled fishing game about a little ball that hopes to follow in its father's profession. However, like the ocean, there are some unsettling things to be found below the surface.

Fisher Diver is played with a combination of the mouse and keyboard. Use the [WASD] or [arrow] keys to swim, dive and surface and the mouse to jut a spear. Wound a fish enough, and you can collect it for cash: the larger and more complete it is, the more will be awarded, but the bigger they are the more they'll fight back. Also to collect are Guffins/Messages: when pulsing, a hit of the [spacebar] will direct you to one if it's in range. Cash and Guffins are traded in the store for upgrades. Watch the meter on the right to make sure that you have enough oxygen. It can be refilled by returning to the surface. Good luck with your new career and the thrill of the hunt.

It's kind of flummoxing. This is a fishing game: a game in which someone catches fish and sells them in order to purchase equipment to catch more fish. Why then will it likely be more disturbing than 90% of the horror games that will be released come Halloween time? Is it the visual and music design that's reminiscent of a twisted version of flOw? Is it the mechanical wire-framey fish contrasted with their all-too-organic-looking blood? Is it the oxygen black-out and that one bone-cracking sound effect? (You'll know it when you hear it.) Who knows, but Fisher Diver does a better job of turning one off sea food than a thousand PETA ads. There's something grimly ethereal and compelling here. While it takes a while to get going, and has the same problems of repetition that the real-life hobby does, Fisher Diver is a stylistic splash of cold water to the face.

Is there more than one

Not sure if it should be considered a spoiler

I dont get it!

You reach the end there is air? And what the last message says?? And why that hunter kills you?????????? PLEASE SOMEONE EXPLAIN

this game is DEEP. ha

Is there really just

one ending? As in, is it possible to win the fight at the end?

And when the game warned me about the nightmares, I thought there would really be more than one. Maybe I beat the game too quickly.

This was a really good game, and I think it deserved more than some lame twist ending with an obviously granola liberal message.

no, there is not

the ending of the game is based on the journal entries in which the writer talks about wondering what it is like to be hunted. so, when you go to the bottom (or the top??), you become able to breathe, as if YOU were a fish, being hunted. the last message is basically saying "i have wondered what it is like to be on the other side (hunted instead of huntER) and i forced you into it"

I think that the end

is meant to have you as the fish. That's why you can breathe the water. You're being hunted by someone. The last message was something along the lines of "I had always hunted, but only ever saw one side of the hunt."

I really love this new era of gaming, where even a small casual game can get suddenly eerie and (ahem) deep.

By the way, did anybody manage to activate the code given at the end of the game? I tried, without success.

The ending was great, I was honestly starting to get bored until I start thinking about the dairy

And notice that I wasn't the one who was writing them but in fact finding them.

The ending was great though I am pretty sure that those who don't simply "get it" will give this game a 1/5 just because they was expecting a stereotypical ending.

The game may have glitched out on me. I just finished the first day, bought a compass, then I believe I lost movement and got stuck in a giant fish. Nothing else happened, I couldn't move, no text warnings or anything. Any idea what happened?

At the end when your being hunted, if you die of suffocation instead of being killed, you will respawn on your boat and the game becomes unfinishable.

you should have died and get the message, that it was just a dream.

BTW: The Nightmare is the explanation, why the game is infallible, every time you die, the game says: "another nightmare" and resets to the beginning of the day, but it is rarely needed, since dying is pretty hard.

I was getting bored too but it is indeed .. deep. As a lot here have pointed out :P

I wonder if there's another ending, where you beat the other fisherman.. fisherball.. thing. Because it caught me by surprise and I'm not going to play through that boring part all over again.

With the wobbly fish things I thought it was funny. Two days in and augh, you were too right, it was quite unsettling. Just couldn't finish it. :(

That said, it was pretty nifty.

Played this a few days ago. I thought it was interesting, but it was too difficult to tell when the "fish" were going to die by bleeding out, making it more efficient to just shoot them to pieces.

I don't recall even getting hit by the other ball at the end. I dodged it and shot it with my harpoon until the ending came up.

Spoiler for the ending:

Anyone else get a "The Most Dangerous Game" vibe from the ending there? At least, that's how I interpreted that ending.

And no, I don't mean Grizzly Boom Tennis.

Great game, as if it even needs to be said.

Glad I'm not the only one who felt bad about blowing those ethereal, gentle creatures to pieces. (yes, they were gentle. even the ones who tried to eat you. I mean, they're fish. that's their thing.)

I think this could have used a little more story, or some more varied gameplay. Right now I really regret having spent an hour on it. The diary entries were interesting and made me eager to keep going, but the twist ending was disappointing:

Even though I was expecting the Captain to show up, the moment they appeared on the screen was still shocking. After all that silence and isolation, suddenly there's another person here! That's rich with possibilities for resolving the Captain's professional and existential crisis, as well as the player's feeling of repetition. Having it end with the player getting hunted may be surprising, but it isn't very interesting. It also doesn't end up developing on the Captain's desire to be on the other end of the hunt -- that's what would happen if the player were able to put up a fight, not what happens when you're instantly picked off by an autonomous heat-seeking drone harpoon.

I may be holding this game to a high standard because parts of it reminded me of one of my favorite art games, I Can Hold My Breath Forever:

The buildup to the ending was similar, but then it went in a very different direction...

Crass gameplay note: a quick way to make a lot of money is to dive deep, kill one or two large fish, and then spend the rest of your oxygen hunting for small, low-value fish with a lot of multiplier gems attached to them. The green square gems are worth 5-10x as much as the round purple ones.

I'm glad the audio is creeping you guys out :) If you wanna check out the soundtrack, you can get it here! http://dvgmusic.bandcamp.com/album/fisher-diver-soundtrack

Regarding nightmares besides the first:

Any given day on which you die is "another bad dream". The nightmare concept is how the game keeps going even after you drown or are bitten to death. This is why the game points out that most nightmares start out like any other day.

Got to the end, lost. got to the end a second time, my mouse got outside the game window and I accidentally scrolled a bit, could not get it back centered before I lost again. very frustrating. Can't seem to get the "givemefreedom" thing to work. anyone else?

There's an added weapon once you enter free play.

just type givemefreedom, it took a couple of tries for it to work on mine. i thought the the game was fantastic, the music was great the fish were incredible the graphical style was ommense, i spent hours playing this game when i should have been working.

Anytime you die it says Another Nightmare.

Does anyone think that we (the player) are the prey even before the game begins? I mean, when the captain says he have found a "fresh new fisherman", is it possible this newbie is the player?

I know the guffins/messages were a bait. But was he planning to hunt especifically us from the start?

Btw, Portuguese is my home language. What is a guffin? Does it have any meaning at all?

"Guffin" is probably a clever play on MacGuffin, which is a word Alfred Hitchcock used to describe a thing that moves the plot of a movie forward (like the statue in The Maltese Falcon, or the ark in Raiders of the Lost Ark).

If so it's a neat reference - I found myself hoping for a Guffin to appear each time I went down, and when I found the last one my heart skipped a few beats!

I can't seem to find the Guffins! Can anyone tell me where they are?

in the nightmare that after a little bit you wont be able to move?

I beat the fisherman...

Where do you type "givemefreedom"?

Can you beat the fisherman?

Please, can someone tell me where do you type
givemefreedom ???

For those wondering how to access the free play mode, type 'givemefreedom' on the menu screen (to either begin a new game or continue). You might have to click the screen to get it to work, it will appear below the other choices.

Strangest-looking fish I've ever seen! But then it's not exactly going for realism, is it?

It freaked me out most to see fish eating the other fish and coming when I hit a fish and it sprayed the blood and made the creepy bone crunch noise... but I had the same bug where

when you drown before you get killed it becomes unbeatable and I just closed the tab, restarted the game, and it went back to normal