Faerie Solitaire is, at its core, a version of the classic golf-style card game found in Fairway Solitaire. Take cards off the pile or pull cards from the play area that are either one above or one below the target, the ultimate goal being to clear the screen. The usual suit of numbered cards (two through ten, jacks, queens, kings and aces) are at your disposal. It may seem a simplistic set-up, but if you throw in power-ups and a Pokemon-esque pet raising game, something magical is created! 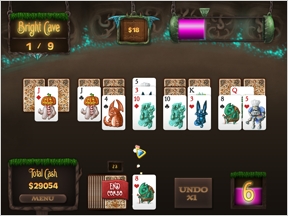 The faeries of the land have been captured, and of course it is your job to rescue them. In true casual game fashion, the only way to save them is to play cards. But, you know, try not to think about that too much. Really this is a game of solitaire, plain and simple. Each level consists of cards arranged in a number of different patterns across the screen. As you remove cards from the top of each tableau, the card beneath it is turned over and can be played. Remove an entire arrangement from the field and you are rewarded with money and, often, other goodies.

Each level lasts for nine hands, and in order to progress you must meet an additional goal. These range from completing several hands with a perfect rating to earning a certain amount of money. Early in the game these are relatively easy to complete, but they become significantly more difficult as the game progresses, forcing you to repeat the last hand of the level until you have fulfilled the requirements. As you clear cards from the board you fill an energy meter at the top of the screen. Top it up and you'll release a faerie!

Collect money on each level and, between stages, you'll get to visit Faerie Land where you can buy power-ups. These helpful little guys include multiple undos, more cards being turned over at the start of each hand, and more gold at the end of each hand. From here you can also access your pets. Yep, you read that right... pets!

Removing piles of cards from the screen often rewards you with eggs and various other materials. Head to the pet hatchery with an egg in hand to activate it. Pets gain experience points as you play, and if you have enough materials, your pet will eventually evolve into a fully-grown magical creature! There are 32 different pets to collect throughout the game, and the only way to catch them all (see what I did there?) is to complete each hand with a flawless rating. 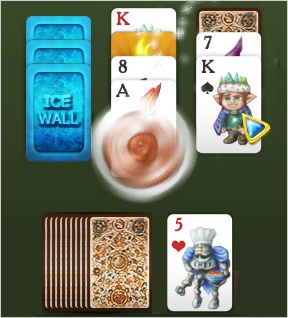 Analysis: Faerie Solitaire is very similar to Fairway Solitaire in a number of ways, but that works in the game's favor. The smooth gameplay keeps you interested in the game on a minute-by-minute basis, and the different card setups along with the pet raising game keep you coming back day after day.

While the story surrounding the game is well-written, it turns out to be somewhat of a throw-away feature. New plot points are only revealed between levels, and as the game progresses, completing all nine hands to finish a level takes more and more time. By the time you're done, you've pretty much forgotten about the story. It's something nice to tie the game together, but ultimately could have been dropped.

It should come as little surprise that Faerie Solitaire includes unlockable achievements. There are eighteen in total, including ones for completing each of the eight stages, collecting all of the pets, and completing all nine hands of a level in under nine minutes. The nice thing about the achievements is that you can mouse over the ones you have yet to accomplish and see what you need to do to unlock it. It's much easier when you know what you are striving for.

Faerie Solitaire is an excellent take on an old card game. It runs smoothly, the difficulty ramps up nice and gradually, and it's addictive enough to keep you coming back for more. You might be able to ignore the story, but you won't be able to ignore how much fun you'll have while you're playing.

Jay and Co, I love your site, but I have to say, I feel like your reviews of games you have to pay for are dishonest. How much fun can ANOTHER find-the-items or solitaire variation really be? The truly original games, like Braid, are definitely worth the money, but I feel like you guys must be getting "donations" from studios like Bigfish and whoever made this solitaire game. Is that the case?

[Edit: No. We scour the offerings every day to bring you only the best of what's available. Believe me, we play a lot of games before deciding what to review. Most of the games we play never make it to the site. -Jay]

EWS, did you try the game? This has to be the most fun version of solitaire ever.

It's definitely a fun solitaire game. The story hooked me in and I was blasting through the levels to see what happened next. Although the end of the story was a little frustrating. I'm still collecting and hatching pets by playing the more difficult levels and going back through the others. I'll post a list of them when I get them all. :)

I could use some info on how I'm supposed to use the numbered cards that store themselves at the bottom right of the screen, or failing that, info on how to get the instructions that pop up to display again.

I only just got this game because it was on special on Steam, and it looked interesting.

@Katherine: The numbered cards can be used in place of a card of the same number from the play field to extend your runs. If you need a 6 to continue your run, and no 6 shows itself on the playfield, and you happen to have a 6 in the cards at the bottom, you can click on it and use it in place of a "real" 6.