Enigma Agency: The Case of Shadows

You've had a bad dream that your boss, John, is in trouble, but somehow neither that nor the address you find mysteriously written on your bathroom mirror screams "bad news" quite as much as the glowing purple nether-portal you arrive to find swirling above his house. Turns out John was contracted by a shady client to track down a map, but ever since he's gotten it, his house has been acting weird... you know... mysterious black vapor emerging from the faucets and electronics sort of weird. Before you know it, you're caught up in a struggle against an ancient evil... and the ridiculously elaborate security measures in John's house. Seriously bro, what if you have to go to the bathroom but you can't because you're missing one half of an intricate puzzle lock? Meridian 93 delivers a cinematic and engaging hidden-object adventure with Enigma Agency: The Case of Shadows. 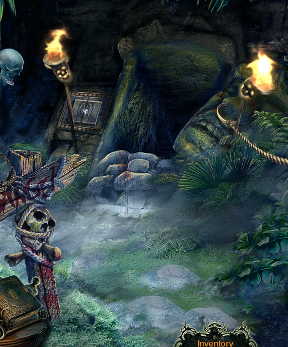 Unfortunately for our bad guy, you're destined to win because you have the power of Click. Clicking lets you gather items, solve puzzles, hidden-object scenes, and navigate around. Your map won't let you travel around by clicking on it, but it will show any objectives you have in each area when you mouse over it. If you're stuck, the hint button will lead you right to your next objective and indicate what you should do to proceed. Unlike a lot of games in the genre, The Case of Shadows benefits from what seems like a real concentrated effort to make most of its puzzles unique and standout. Clues to solving them tend to be hidden everywhere, and the return of Rube Goldberg machines are always welcome, but the sheer variety and number on display is sort of staggering.

The downside is that the game also feels like its burdened with a lot of busywork and long, drawn-out tasks, during which the story grinds to a halt so you can do important things like solve three puzzles and gather ten items just to get someone a glass of water. The result is a long game, with enough puzzles and obstacles to satisfy almost anyone, but a game that's also long primarily because it does so much back-and-forth. Fortunately, it's also lovely to look at, and the sheer heft of its gameplay combined with its otherworldly storyline means you'll be wrapped up with this one for a satisfying length of time no matter what difficulty you play on. Though its pacing is somewhat uneven and I could personally do with a bit less of the whole persistent "malicious evil shaman" theme in games in general, on the whole the game sets the bar remarkably high. Packed with puzzles both clever and challenging and a story that will send you trotting across the globe to put things right, Enigma Agency: The Case of Shadows is flashy and fun and well worth checking out.