Echoes of the Past:
The Revenge of the Witch

This time it's really witches! Some evil witches! Or at least, a witch. Turns out, they don't really appreciated being thwarted on multiple occasions, and this particular one has used her considerable bag of tricks to bring tragedy upon an entire kingdom. Since the court magician is powerless, it falls to you to be a bad enough dude (or dudette) to track down the ten magical gems necessary to power a staff that can restore the land in Oneon's hidden-object adventure Echoes of the Past: The Revenge of the Witch. Now with ten times more magical MacGuffins! 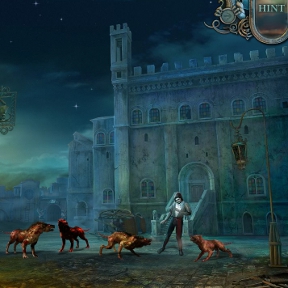 Turns out the kingdom would have been been 100% evil shadow minion free if only the ruling house had sprung for a mouse, since that's all you need to click around and solve puzzles or gather clues. ... or, okay, I guess technically your magic, sassy talking mirror who provides hints might be some help too. The witch isn't just going to kick back with a cup of newt bile or whatever witches drink, however, and as you play and search the kingdom you'll constantly have to deal with her interference. Her magic can turn inanimate objects against you, make hellhounds out of puppies, bar your way, or even craft cunning magical locks to prevent you from getting the tools you need... although I might offer that any devious supernatural puzzle you can circumvent simply by waiting a moment or two and then clicking a "skip" button has some flaws in the design. 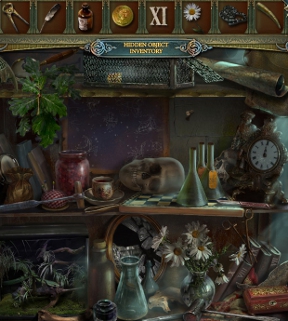 Analysis: Come on, who doesn't like a good ol' fashioned witch thwartin'? I mean, aside from the witches themselves. Though Revenge of the Witch doesn't necessarily offer much new to the tried-and-tested hidden-object/adventure genre tango, or even the plot, it does present it in an exceptionally clean and well done manner. The beautifully drawn environments have a wonderful air of magic and mystery about them, and fans of slightly darker fantasy will enjoy getting lost within it and dealing with the troubles that pop up. The hidden-object scenes that require you to put items back where they belong are a nice touch, breaking up the usual gameplay, and the puzzles and item uses are all nicely logical. Revenge of the Witch is, by and large, a very well made game that, apart from a faint graininess to the already dim visuals and a few obnoxious minigames, is easy to get into and play.

What it isn't, unfortunately, is particularly challenging regardless of the difficulty setting you choose. It's the sort of game you pick up if you're looking to relax for a while, where the puzzles are all straightforward and everything you need to get past an obstacle is usually close by. Chances are if you try the demo you'll find yourself breezing through it, and diehard fans of the hidden-object adventure combo might find this one a bit too familiar, but if you want is something well made, packed with magic, and full of breezy entertainment, you'll want to check this out. It even includes a puzzle editor as a bonus feature in the Collector's Edition, which might be a first. The plot is fast moving with a few little twists to keep you on your toes, and should have more than enough haunted suits of armor, creepy talking child drawings, and bizarre amoeba minigames to satisfying even the most eccentric enthusiast. You guys are weird.