You're not sure who you are. You don't know where you are. And a mysterious dark shadow is following you around, clouding your memory. It's shaping up to be quite a bad day as Echoes of Sorrow, a new casual adventure game from BlitPop, begins. This title drops a few hidden object scenes to flavor an otherwise straight-up free roaming adventure game that emphasizes exploration and inventory puzzles. Not only do you have to gather items from various parts of the game, but you're usually not sure what to do until the very last moment. It's a smartly paced game that hits all the sweet spots for casual adventure fans. 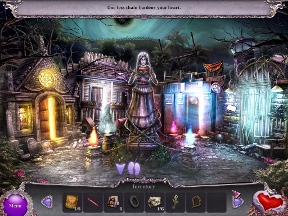 With very little information to go on, you feel much like the main character in Echoes of Sorrow as you start playing. A short, textless cutscene introduces things, and then you find yourself thrown into the game, staring at a few strange and haunting scenes right off the bat. The interface is standard, assigning all actions to the mouse and a cursor that changes when hovering over something you can interact with, so there's at least one familiar thing you can hold on to at the beginning.

Echoes of Sorrow is divided into small areas that represent a portion of the main character's past. You must unlock these one by one, completing the puzzles within each to learn more about the characters' pasts and freeing pieces of your soul in the process. For example, the first area puts you in your childhood home, filled with mildly disturbing images from your past. You'll eventually move on through your life, setting emotions at ease and filling in the massive gaps in your memory.

Puzzles are largely inventory based and feature a lot of backtracking, collecting, and experimentation. You'll often need to find certain items in order to gain access to parts of the level introduced early on, forcing you to abandon scenes in favor of pressing onward. Eventually you'll gather the things you need and be able to gut the entire level of its secrets, but accomplishing that requires some thorough exploration and a very keen eye. 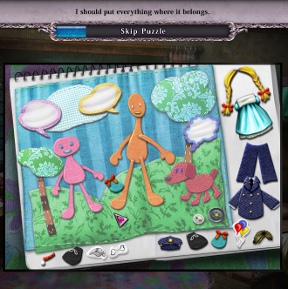 Hidden object scenes are kept at a minimum, with just three or four very short interludes per area. They're also surprisingly easy, with just a dozen or so items to find, none of which are obscured or masked in any strange way. The hit box for clicking on items is also rather large, making it easy to accidentally nab something you weren't even sure you were trying to take. The game's hint system is very generous as well, so if you're not one for hidden object games, you don't have to overlook Echoes of Sorrow!

Analysis: Echoes of Sorrow is a smartly-made game that holds fast to its casual adventure roots. Level design is surprisingly open-ended, affording you the freedom to roam around, click on things that interest you, and gather things as you please. The puzzles are also well-done, though they require more of an eagle eye than a genius brain. If you ever get stuck, it's probably because you missed some detail in a room, not because you can't figure out how to solve a puzzle in front of your face.

The whole amnesia shtick has been done many times before, but in the case of Echoes of Sorrow, it actually works quite well. The story unfolds while you play, introducing bits of information as you solve puzzles and explaining a few things with quick cutscenes before and after each area. Even though it's trite, the story and setting in Echoes of Sorrow is one of the game's several strong points, so don't pass it by simply because it stars an amnesiac!

Although the mini-games are kept to an absolute minimum, Echoes of Sorrow has some of the most creative diversions I've seen in a game of this genre. For example, in the first area, you'll find a child's picture created with bits of fabric. Your job is to drag the cutouts to where they belong, much like an abstract dress-up game. Unusual? Yes. Fun? Very much so.

A strong adventure game that doesn't deviate from its core, Echoes of Sorrow will keep you busy for several intriguing hours, unfolding an interesting story while leading you through an unusual world filled with memories and mildly unsettling images.

28. Finding all parts of the stamp machine/Escape

28. Finding all parts of the stamp machine/Escape

I have all the game done but the church and the picture of the sister is still purple will not let me go foward. Whats wrong or have i missed something

I'm having the same problem.. can't work out how to get the church hidden object seen up... grave picture is glowing but can't work out why or what I need to do with it..

I had the same problem. Found that I didn't pick up the ticket piece in the cellar of the church. As soon as I did that I got the final hidden object scene.

Hi Ciara Mcardle -
Did you check the walkthrough, highlighted in blue above. Hope it helps you find what you need.

I am enjoying the game, however, it is sometimes hard to understand the hint button of where it wants you to go. Also, I am stuck at the prison and can't seem to get to the following steps. Need the walkthrough guide to help.

There are programming flaws in this game! Got almost to the very end where you use the ticket and ticket stamp; however there is a stupid tutorial box stating that I need to click on the Clock above the Gate (across from the train). I click the stupid clock but nothing happens. (I was given clock hands in my inventory when I first entered the train station scene only after I almost finished the game.) I can not get the stupid clock hands to attach to the stupid clock! Because the game will not accept the clock hands, it will not get rid of the damn tutorial box, which means I can not click on section of the screen where the stamper is located.

WHAT A DAMN RIP-OFF OF A GAME! YOU GO THROUGH THE ENTIRE GAME, BUT CAN NOT FINISH WHAT SHOULD BE THE LAST FIVE MINUTES OF THE GAME! What a damn frustrating disappointment!!!!!!!!!!!!!!

I finished the church chapter did the hidden object it won't let me in the last cahapter what do I do ?

Great game, but think I have hit a glitch. Putting the panels behind the altar in the church. Collected both, picked them out of the inventory box, clicked on left space, in it went but the other one stayed in inventory as if I'd only collected the one. Can't pick it out. Will I have to start the game over, so close to the end?!!

Replayed the game. Quite a few bits I'd missed. Missing the panel cause I hadn't found the coin to open the box, etc. You have to go back to entrance of each of the 4 locations after you think you've finished with them. Competed whole game, brilliant. Best game I've played for a long while. 10 out of 10

i did every building but when I got back to the college I could not get the candle out of the locker. what do i do with out the candle? I can not finish the game.

how do I get the piece for the motorcycle in the basement?

Have a look at the walkthrough above the comments to make sure you haven't missed a task.

If you haven't, you may need to contact tech support wherever you purchased the game.

I reached the prison and played all the games but i can only find 6 files for the dossier and cant find the last file and there are no more games to play. so can anyone please help in this issue??

699 Views
0 Comments
chrpa— Jayisgames needs your help to continue providing quality content. Click for details Welcome to Mobile Monday! In the first game by Kansho (Saburou Konuma), still holidayish, you find yourself in high mountains locked inside Santa's cabin, When you escape...  ...

4,506 Views
1 Comment
chrpa— Jayisgames needs your help to continue providing quality content. Click for details Welcome to the Roundup 37 with three games! As mentioned in the previous roundups, only odd-numbered episodes are featured since even-numbered are for Robin Vencel's patrons. More...  ...

2,309 Views
0 Comments
chrpa— Jayisgames needs your help to continue providing quality content. Click for details Welcome to Weekday Puzzle! Jani Nykänen's pixel puzzler is fun - it's Pacman-like game with blobs. In pancelor's puzzlescript puzzler you need to get boxes on their...  ...

4,041 Views
17 Comments
chrpa— Jayisgames needs your help to continue providing quality content. Click for details Hi, the newest Weekday Escape is here! At the beginning you are supposed to escape from two U.S. states with Selfdefiant, and then you find yourself in...  ...