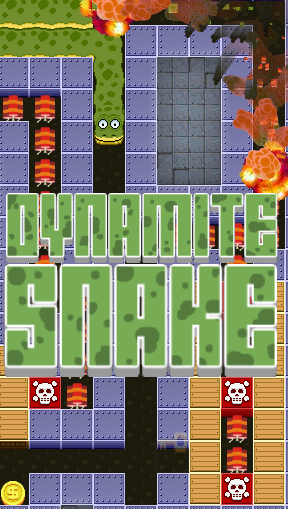 Walking away from an explosion? Instant coolness. So what does a snake need to modernize his game and regain some street cred? Explosions, of course. And in Dynamite Snake, a retro arcade puzzle game from FrameCoders, you're in control of a snake who spends his life slithering coolly away from explosions. Unless he moves too slow, in which case his face gets blown sky high.

Your goal is to guide the snake to the exit on every level, using the [arrow] keys. Each segment of his body explodes after a second or two, so there's no time to spare. To complicate things, levels are packed with bombs, coins, destructible blocks, and so on, most of which can be interacted with by having part of your body combust next to them. Maximum score on each level is awarded for collecting every coin and causing the most destruction possible.

Fans of high-octane puzzle games will enjoy Dynamite Snake. Snake veterans might feel the title is misleading, as the only real similarity to classic snake is, well, the snake. Really, Dynamite Snake is a collection of clever puzzles with good looking pixel art that happens to have a snake theme, and that's never a bad thing. Unless you're Indiana Jones, in which the whole snake thing might put you off.

@[email protected]
That is HARD.

I thought this was a lot of fun. :) It's not quite a "snake" game, but it was a nice coffee-break puzzle game with snake elements.

I though it was annoying that the "Autosolve?" option opened up if you died too many times on one level, but it was nice to know that the option was there if you needed it.

This game was surprisingly fun and included the right balance of puzzle and execution. Some of the levels were boring and obvious, but they were over quickly.

Can't say I am fond on the controlling when you have to make consistent tight turns, but other than that it was a good time waster.

It would have been better had the snake not gotten stuck against walls and moves farther than you intend causing many deaths. Also the exploding graphics of the tail distract from the head making it hard to tell where it is with all of the other explosions. At times it would also lag and then you did not know what direction you would need to be going when it caught up.

Because of the lack of being able to control the snake the game became limited. I did complete most levels, but there could have been many more puzzles had it been less difficult just to control the snake. With a little improvement this game or a future version or sequel would be much more enjoyable, because of the sticking and lagging it made it an ok game. It was enjoyable aside from the frustration. There were only about 4 levels I could not complete because of the sticking. Often times in games with directional game play when you press the next direction the character goes that way even if you have not released the previous key; this helps a lot in fast game play.