Dungeon Scroll Gold Edition is a now-classic word game that gracefully blends a dungeon crawling RPG setting into a letter arrangement game. Much like Bookworm Adventures has done for the puzzle/RPG hybrid, Dungeon Scroll helped move word games a step out of the brainy category and into the realm of casual entertainment. You still have a meaty word-based puzzle experience on your hands, but now you have more than a high score to keep you addicted. 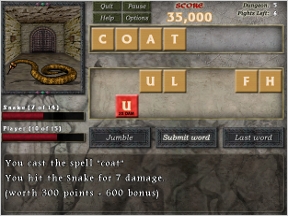 Dungeon Scroll is built around the simple idea of working your way through a series of dungeons defeating enemy after enemy. Each foe attacks you at regular intervals, slowly chipping away at your hit points. To fight back, use the letter tiles on the right side of the screen. Spell words to deal damage, the longer the word the better, and send those ruddy wraiths fleeing before your almighty powers of spelling.

Dungeons are composed of a series of fights, each using the same set of letter tiles. You get a bonus tile after every battle, and these are what keep the game alive and fresh. Some letter tiles give bonus damage, while others are good for only one use. Health potions can be used at any time, restoring a few hit points to give you more time to build longer words. The special Oracle tile is the neatest of all, and once used it arranges your letters to form the highest scoring word possible. It's humbling to see the constructions you can make with a handful of V and X tiles!

The unique strategy Dungeon Scroll encourages is to meter out which words you use for which battles. For example, if a weak rat with a meager four hit points comes by, you wouldn't want to use that seven-letter word you constructed in your head earlier on. Instead, bat the little guy away with short words, then unleash the big guns for the massive foes. 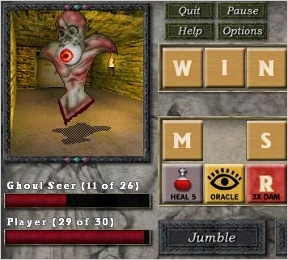 Analysis: Dungeon Scroll is a modern classic. It won't win any visual awards, as the game has a fairly drab color palette and doesn't bother with fancy animations. But words are ageless, and it's here where Dungeon Scroll really delivers. Something about the gradual progression of a role playing game mixed with letter tiles creates that extra drive to play.

Even though it's a hybrid, Dungeon Scroll is much more of a word game than any kind of RPG. You're crawling through a dungeon, you're fighting skeletons and bats, you even pick up treasure after battle. But none of this really matters to the game, as it would perform just fine without them. So, while the dungeon crawling aspect is a welcome addition, I really wanted it to be fleshed out a little more, adding a few more advanced concepts like experience points or equipment.

It's simple, it's to the point, it's classic, and it's inexpensive. Dungeon Scroll Gold Edition is an easy way to appease the inner wordsmith while throwing a few giant spider and snake battles in the mix. If you own an iPhone or iPod Touch, you can grab a refined, mobile port of the game from the iTunes app Store.

Is there any point to the stuff you collect after a dungeon, or is it just there?

If I buy this game, you guys will never see me again.

Miles O'Toothpaste: It's just there. You get a tally of everything you picked up, but as far as I can tell, it doesn't have a practical use in the game.

Was kinda fun, but WAY too easy. I completed the game in expert mode with 35 minutes left to go in the demo. Never even came close to dying.

joemomma: I agree, the game is a bit on the easy side. Fortunately the iPhone version seems to have the difficulty kicked up a notch. A small notch, but a notch. :-D I would love to see a sequel to this game.

Got this on the iphone, would highly reccomend. It's great fun and a good timewaster.

As far as i can tell, the items at the end of a dungeon are randomly named, and usually give you a one-use letter as well.

Its not at all difficult. I think its a wonderful game. I am talking about iPhone version only