Dreamsdwell Stories is a unique match-3 type puzzle game with some strategy elements (similar to the village building variety such as Totem Tribe or Westward III) built into the experience. 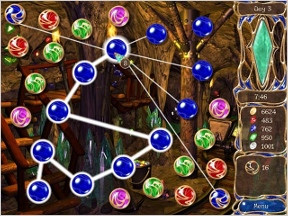 Have you ever wished you had a little magical place all to your own? You know, the kind of place where you don't have a zone manager telling you what to do in some futile attempt to establish his dominance over you, or where that term paper you've been slaving over until one o'clock in the morning every night for the past three nights is no longer due? We're talking about a place so nice that even the troll under the bridge is actually a pretty decent fellow.

If this is what you're looking for, then Dreamsdwell may just be the place for you. All you need is a quaint little village complete with castle, pirate ship, and bridge (for the troll of course), and voila! Your happy place awaits!

Building this little fantasy paradise won't require hard work with saws and splinters and blisters on your thumb. All you have to do is perform your special magic with the multicolored stones... Oh, did I mention that? You get to do magic in Dreamsdwell. Specifically, you link three or more stones of the same color into chains. The longer the chain, the more gold and jewels you get which can then be used to build up your village. You can make your chains as long as you want, but you can't overlap, and you can only shift color if you use one of the powerful rainbow stones that occasionally pop up.

You don't have all day to do this, mind you. Where would be the challenge in that? No, you have a time limit to compete with, and as the game progresses you'll also have breakable barriers to contend with as well as indestructible barriers, and if you waste too much time the stones on the board will start to freeze and you can't unfreeze them unless you link a chain in their vicinity.

As you progress, your little village will grow and become populated by farmers, knights, and even fairies. I even heard tell of some sort of dragon. No, not the burn down your village and sit on a pile of gold type of dragon, the other kind... I think...

Analysis: Do you like combos? Are you the kind of person that only goes to restaurants if they have combo meals? Did you memorize every single bazillion hit combo in every fighting game ever? Do you start saying syllables starting subsequently with similar sounds simply because, well, since you already started, you might as well wrack up the combo while you're going? If this is the case, you may find a friend here in Dreamsdwell. 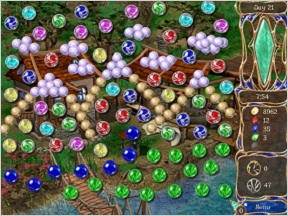 Wrapped in a package of crisp, sometimes beautiful, graphics and catchy theme music, the core of Dreamsdwell is its rather unique match-3 style puzzle game. In fact, I haven't seen a puzzler quite like this one before; the chain making mechanic allows Dreamsdwell to feel more like Boggle than your run of the mill match-3 type game.

Unique is good but is worthless without execution, and this is another thing that Dreamsdwell does well. Aside from the pretty visuals, I found that new mechanics were added at a suitably gradual rate. Also, the difficulty level doesn't ramp up quickly at all, making this game accessible to players of all skill levels (although it isn't very color blind friendly). Add to this the fact that Dreamsdwell has no questionable content to be seen, and this becomes a perfect game to share with the little ones.

Overall, the puzzle portion of Dreamsdwell is extremely fun and addicting. The driving incentive in the game is to build bigger and better combos and there's plenty of freedom to do so. It is apparent that the goal in the creation of this game was to make it fun, not hard (so you junkies of all things crazy difficult may find this title disappointing).

Unfortunately, Dreamsdwell comes with some faults as well. Cosmetically, what little dialogue there is is sometimes clumsy with glaring errors in grammar. Also, you may find a few minor inconsistencies in the way the stones can be linked together in the puzzle portion of the game.

But Dreamsdwell's largest weakness centers around the village building portion of the game. This fraction of the game is hardly game at all. There is zero managing, all the locations are predestined, and the bounties for building new structures are minimal. Instead of taking this part of the game seriously and therefore making a really great hybrid game, it is pretty clear that the intent of town building is to do little more than to break up the puzzles every once in a while. Thus, building Dreamsdwell is little more than a distraction from the heart of the game as opposed to an integral part of it. Happily, there is a quickplay mode that is available early on if you don't feel like mucking about with building the village.

Overall, if you were to look at Dreamsdwell as a fusion game it doesn't do very well, but that shouldn't distract from the fact that this is still a very fresh addition to what has become a very stale genre of match-3 puzzles.

i've got a question i'm not sure where to ask.

[Edit: Please use the contact email address, a link to which is found at the bottom of this page. Thanks! -Jay]

This is a very charming game with a nice message at the end. At one point it took me several tries to get past one level as I was always running out of time. It's very addictive.

The graphics are very nice for an arcade game.

This game could be expanded into a Kings Quests type version instead of just an arcade version.