I don't know about you, but every now and then I get bored with all the paranormal mysteries and long for something smothered in fairy dust and happily ever afters. Luckily for anyone with the same desires Elephant Games has found that star we all wished on and made Detective Quest: The Crystal Slipper, an enchanting hidden object puzzle adventure game that will bring that Disney themed twinkle to your eye. Sadly, you won't be the princess in this tale, but instead a Detective trying to help that silly Prince Charming get his lady love. 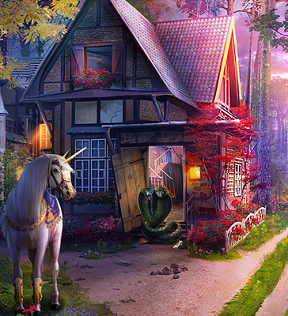 Instead of the tried-and-true method of making women put on shoes until it fits just right, Prince Charming has decided to go for a more practical solution to his problem: hire a detective. The problem? A mystery woman that has captured his heart has vanished, and he wants to make her his beautiful bride. There's some complication with that, though, because finding her doesn't always mean there's going to be an instant win. Instead you'll have to encounter a menagerie of magical creatures and an evil witch trying to overthrow the kingdom. A simple task for a super sleuth like you, right?

There are no dramatic changes to the hidden object genre with this game. There are three difficulties to choose from, and as usual they will determine the existence of sparkles on interactive area, and the rate at which the hint and skip abilities recharge. Your cursor will change when hovering over interactive areas, items that can be picked up, and characters that can be spoken with. To make your journey in the magical kingdom more convenient, a jump map has been provided to allow your travels to be faster than two shakes of a lamb's tail. You will have to complete reverse hidden object scenes where you will place an item back into the cluttered area. Puzzles and mini-games are sprinkled throughout and have a fair amount that are quirky and new. 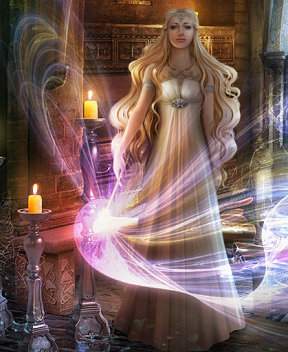 Analysis: It seems to be a consistent fact that any game Elephant Games produces has gorgeous artwork. The scenes are flawless and painted with magic every which way you look, and the creatures are created expertly whether they're a new imagining or an age old myth. The puzzles are witty but not too difficult so you won't have to rely on your skip button too much. The amount of backtracking would be arduous if not for the jump map; though backtracking still isn't that much fun despite the convenient tool.

One of the best parts of this game is that it doesn't use the Cinderella tale like a crutch. Instead, the story is delicately woven with twists and turns to keep you guessing what's going to happen. It would be easy to have simply stuck with a jealous stepmother trying to thwart Cinderella and her happiness, but instead Elephant Games borrows from several fairy tales to weave together an amazing game that will delight any fan of detectives, fairy tales, or unicorns. Whether you're glum or gleeful, a dash of this game will brighten any day.