Sara Davies's husband has reported her missing. The problem is that several people have reported seeing her wandering the estate in the company of a black cat... although she appears to vanish whenever anyone approaches her. Together with Inspector Dupin, you'll have to explore the estate and attempt to unravel the mystery surrounding Sara's disappearance, which only deepens with the appearance of a strange cat that seems to be following you... or is it the other way around? Dark Tales: Edgar Allan Poe's The Black Cat is a hidden-object adventure game from the creators of PuppetShow and Redemption Cemetery that should be just the thing for the holiday season. 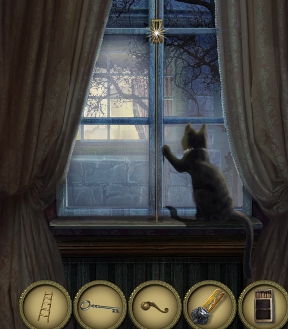 Instead of traveling all over the city, this time you're confined to the Davies's manor and grounds in your investigation. Mr. Davies is less than helpful, so you'll need to track down clues yourself. Which would be a lot easier if the who place wasn't in such a state of disrepair. Everyone's favourite attention grabber and all-around-no-help Inspector Dupin is back, so you can rest assured that if you ever need anyone to state the obvious or to never left a freaking finger to help you do anything, he's got your back. (BROS FOR LIFE, MAN.)

Much of your progress is going to be barred by locked doors, and most of those locks are going to have missing pieces to them. Why, it's almost as if someone doesn't want us to find out what happened to Sara! Unfortunately for them, we're hidden-object and puzzle pros, and we'll scour every sparkling nook and cranny until we get to the bottom of things. Though the hidden-object scenes can be tricky, you've got a hint button on a timer to use if your eyes fail you, and the puzzles can also likewise be skipped if you ever find yourself stymied. 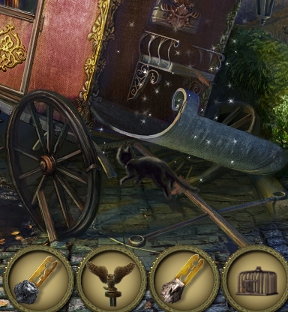 Analysis: As classy as it may be to imagine Poe only wrote stories about gentlemen detectives in cravats and tight pantaloons, I can promise you that he was a pretty rad dude and the original version of The Black Cat was kind of insane. This retelling is comparatively tame, but is still a lot darker and more mysterious than its predecessor. Even if a few good twists would have kept it from becoming predictable, the whole thing is gloomy and dark and wonderfully creepy. There are a few surprises to be had, and although you'll probably have figured things out whodunwhat long before the halfway point, you'll definitely enjoy the journey.

But while it's good, it still feels like it could have been better. You don't feel like you're solving a mystery, you're just repairing things around the house, and there's rarely much brain power involved in it since the game often tells you what you should be doing. It's all perfectly serviceable and may even offer you a bit of challenge, but it's hard to shake the feeling that you've played it all before. There's even an instance where you have to use a newspaper to retrieve a key on the other side of a locked door. Yes, again. But what it lacks in originality, it makes up for in presentation. Although the music will probably be familiar to you if you've played any recent ERS Game Studio title, it fits things perfectly, and the design is absolutely beautiful.

The Black Cat should take you four hours or longer to complete, depending on your play style, and there are plenty of places to explore. It's a solid, meaty night (or nights) of gaming. Dark Tales is really shaping up to be a great series with quality to look forward to, and something every hidden-object fan should keep an eye out for. And maybe if we're lucky, the next cat-themed horror game will be based on Stephen King's "The Cat From Hell". Now that's entertainment.

A Collector's Edition is also available. It contains a bonus chapter to play, wallpapers, soundtrack, and more. Remember that Big Fish Game Club Members pay only $13.99 for Collector's Editions (or 2 club credits), and collector's editions count 3 card punches of 6 total needed for a free game.

Haven't played the game... but from reading the summary I can say that this is NOTHING like Poe's story....