When one woman is brutally murdered and another winds up missing in Paris's iconic Rue Morgue, the police are at a loss. There's no-one else to turn to except for the great, if eccentric, Detective Dupin. Oh, and you, of course. It's no time to lollygag about. The game is afoot! Or maybe it's an elbow. I can't remember. Oh well, one body part is as likely as another. Polish up your magnifying glass for hidden-object searching in Dark Tales: Edgar Allan Poe's Murders in the Rue Morgue. 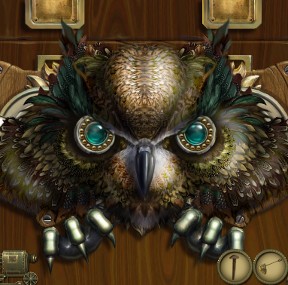 While the game initially limits you to the home of Detective Dupin, you'll soon find yourself traveling all over Paris in an attempt to track down the killer. Unless you're playing in hard difficulty, areas where you can trigger a hidden object scene are indicated by sparkles, which I like to think of as "Magic Detective-o-Vision". Clicking on these will bring up one of the game's many hidden object scenes, all of which are very well done. Most scenes will also have areas you can interact with, so when the cursor changes to a hand, make sure you click that spot; you may find one of the items you're looking for in a drawer or under a bed. Navigation is handled simply, by clicking when the cursor transforms into an arrow to move to a different area, or when the cursor becomes an eye to get a close-up.

Along with your standard hidden object scenes, Rue Morgue also offers a fair amount of puzzles in an attempt to stymie your detective work. While they're fairly well done, most of them are just colourful variations of simple mechanics you've probably seen before, and won't offer much challenge to your average player. Likewise, the point-and-click sequences, involving using the right object in the right place, are generally pretty straight-forward in the "use rock on glass" sense. Some of you may question how Dupin knows that old rock on the ground is going to be of use to you six scenes from now. It's because he's a detective, smarty-pants. Obviously. Sheesh, kids today.

Okay, so while the item usage is a little "because I said so", most of us are familiar with that from the point-and-click genre already. There's very little fumbling about, since by the time you pick up an item, you've already seen the place you'll need to use it. Likewise, the hidden object scenes themselves are well done. Objects fit in well with their surroundings, and a few may have you reaching for the rechargeable hint button. It's a little disappointing that the items cluttering up each scene frequently have little to do with the area in which you discover them, but they're at least well rendered. Besides, doesn't every well bred young woman have a jeweled fish in her drawers? I know I have several. 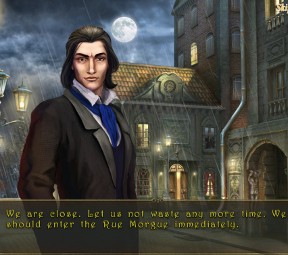 Analysis: Those of you hoping for a gritty, tense horror story of cat-and-mouse with a brutal killer are going to be disappointed, because Rue Morgue isn't much of a "Dark Tale". Since the game is largely faithful to Poe's original short story, this is less the game's fault and more a case of people being easier to scare in the mid-1800's, but in a game where the title literally drips blood, you tend to have certain expectations. As it stands, Rue Morgue is nearly light-hearted in its execution. A big reason for this is the occasionally unintentionally hilarious narrative, such as the protagonist assuming the detective "has his reasons" for the human skeleton that pops up in his house. The game also features one of the funniest, weirdest, and most distracting hidden object scenes I've ever encountered. You'll know it when you see it. And hear it.

But where Rue Morgue absolutely succeeds is its top notch presentation. From the dirtiest of prison cells to the lavish apartments, Paris here is rendered in beautiful artwork and is a treat to explore. I just wish as much effort had been put into the game's soundtrack. Like the music? I hope so, since it's just one long tune repeated over and over. It's easy on the ears, but a little variation would have been nice. The narrative is smooth and well-written, free of typos or grammatical errors. Make sure you investigate everything, since even non-essential objects in your environment usually have something interesting written for flavour text. Dupin's study, with its strange beasts, is a perfect example. So strap on your sleuthing shoes and your most enigmatic expression. Paris awaits!

How long it takes you to complete Rue Morgue is largely going to depend on how easy you find the hidden object scenes, but most players will likely get several hours of gaming out of it. At the price of your average movie ticket, I'd consider that a fair deal for my entertainment. It's not a breakout title, but it is a solid one, and hidden object fans will find a lot to enjoy about it.

They did not seriously use Papyrus as the font for their title... did they? o_0

Avoid this one. I expected something like Dire Grove or similar and was hugely disappointed.
It's very very short and doesn't come anywhere near the quality of other BF games.
Felt like it was made for kids.

Need help with Dark Tales, murder at the rue Morgue.

I have gotten to the screen where I am supposed to move the numbered buttons around and put them in numerical order. I click on the buttons and try to move them and I cannot get them to move.

Any help would be great.
Judi

Judi - numbered Buttons
Are you in the Bank? At the director's office?
If so:

It is a slider puzzle - a button will only move, when there is a free space right, left, up or below the button

When this is not the puzzle, you are having trouble with, please give some more specific informations about chapter/level :).

I need help to get what's behind the grate. I have the wrench, but it won't open the grate.