From crooked law agents to psychic detectives to run-of-the-mill agents who find themselves in tough situations, most of us feel like we've got a good grip on the fictional portrayal of the justice system at this point in time. Dark Ritual plays with this familiarity a bit, introducing two FBI agents at the very beginning of the game, one of whom has a sister that has mysteriously vanished. The pair sets out to locate her, uncovering top secret plots, a mad scientist with an Incan mind control concoction, and plenty of mysticism along the way. It's a stunning hidden object thriller from Vogat Interactive (Shades of Death: Royal Blood, Gravely Silent: House of Deadlock), and you won't be able to pause until you've ran through to the end! 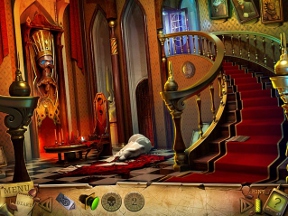 Dark Ritual (no relation to the card from Magic: The Gathering, in case you were wondering) plays out like an adventure game with several key hidden object segments. You are free to explore a few scenes and pick up a few items, taking note of certain key areas that, if you're playing in casual mode, will sparkle. Poking your FBI nose around will reveal some obvious puzzles, and in order to solve those puzzles, you'll sometimes have to head to hidden object land!

Hidden object scenes are generally short and feature the usual selection of cleverly-stashed items to find. When you've cleaned up your list you'll notice at least one of those objects are important and stash it in your inventory. Once you're back in the main portion of the game, use the item to solve a puzzle and continue onward! If you ever get stuck, the hint system is more than adequate, even in advanced mode. 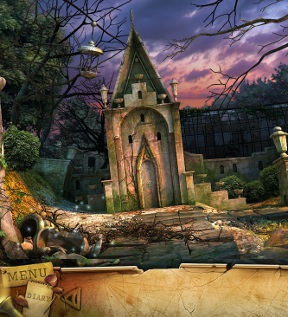 Analysis: Filled with good visuals, mysterious plotlines, and a few touches of cheesy dialogue, Dark Ritual is a hidden object game just about anyone can enjoy. Its design is straightforward in almost every way, from its hint system to the mini-games, adventure-style construction, and hidden object scenes. No real surprises to uncover, just an interesting plot about a missing FBI agent's sister and a few ancient legends that seem too true for comfort.

Later in the game you get more freedom to walk around and explore the four main areas you've already visited. This also means you'll repeat some hidden object scenes, which is a bit of a letdown but not too disappointing. This lengthens the game to make it a bit longer than most hidden object titles (four hours in all), and the environments are so well illustrated you really don't mind seeing them a few more times.

Dark Ritual doesn't go for mold breaking at any point. It just delivers solid hidden object gaming with nice visual imagery and a good storyline that will carry you through from beginning to end. If there's any down side to the game, it's that it comes off as a bit too generic, but if you're not looking to reinvent the hidden object wheel, there's nothing wrong with investigating some strange dark rituals now and again.