Our culture has become so Disneyfied in many ways that we forget about the truly grim nature of fairy tales. The original stories are dark, depressing, and don't always have a happy ending. Hearing one as a child could cause a frisson of fear down the spine, a wish for a night light, and a lot of jumping at noises in the dark. Hansel and Gretel stripped down to the basics is not a happy tale; the true Little Mermaid is definitely a downer; and the old-school story of Cinderella with its various mutilations could cause some kids to run screaming from the room. The new adventure/hidden object hybrid Dark Parables: Curse of Briar Rose by Blue Tea Games tries to take us back to the classic (pre-Disney) story of Sleeping Beauty, and the ending is not necessarily a happy one. 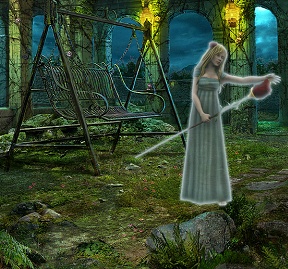 The opening cut-scenes of this dark thriller recap the famous and well known story: king and queen have a daughter, the christening and the evil godmother, the curse and the spindle, thorns covering the castle and a sleep for a hundred years, etc. However, when the kindly prince arrives and kisses poor Briar Rose (her original name from the Brothers Grimm tale), something goes awry. Everyone in the castle wakes up except the poor princess. The thorns are gone, the curse is lifted, except for Sleeping Beauty herself. She continues to sleep on, oblivious to the march of time as a thousand years go by and everything she knows passes way.

Cut to modern times as the heroine of the story, a detective, receives her assignment. Some strange sort of thorny vines are growing rapidly from the old castle that is the basis of the Briar Rose myth. Something needs to be done quickly, as the vines threaten to overtake and overgrow the nearby city within seven days. It is up to the gamer, in the guise of the detective, to investigate the crumbling castle and discover how to stop the curse before a mass evacuation needs to take place. All you have to do is find your way into the castle, solve a multitude of puzzles, fight your way past the evil godmother who is apparently still hanging around, and save the day. Simple.

Dark Parables: Curse of Briar Rose plays like a point-and-click adventure with hidden object elements. There will be a lot of wandering to and fro, and each door and puzzle you work your way past opening up new areas to explore. Although there are 12 chapters to the story, gameplay is not exactly linear. It will be necessary to backtrack a lot and visit most places several times to find all the objects needed to move onwards. Briar Rose herself and the evil godmother are flitting around as well in non-corporeal forms, keeping tabs on you as you work your way towards a final resolution of this twisted fairy tale.

Areas of interest and items that can be examined are indicated with single sparkles, and hidden object scenes are marked with a shower of sparkles when you enter a room. There's also a handy changing cursor that can turn into a magnifying glass (to examine areas and trigger puzzles) or an arrow (to signify areas that you can travel to). Your detective's journal keeps track of things that you've seen and places that you've been, which can be useful in later stages as you work your way deeper and deeper into both the castle and the mystery at the heart of the game. Why are the vines suddenly threatening the world again? Why did the princess never wake up? Good questions that need answers quickly before the nearby town is overwhelmed. 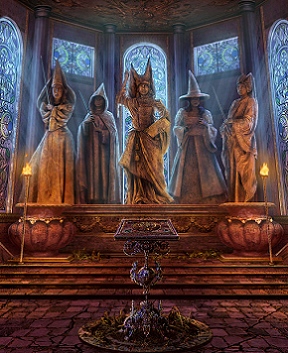 A nifty feature is a small icon below the hint timer called the Inspect icon. Click on the inspect icon and it will show you a snapshot of areas that need closer examination. It can also be used in an area to garner a hint as to what needs to be done next. However, using the hints from the Inspect icon causes the hint timer to lock for five minutes, so use it sparingly. The hint timer itself refills rather quickly — handy for the hidden object scenes, which are not about finding random objects but pieces of objects that will aid you in your search. The puzzles and mini-games can also be skipped immediately if you choose, but again at the expense of the loss of the hint timer for a set amount of time.

One of the things that makes Dark Parables so much fun is the addition of a side quest: cursed objects. Very similar to the magical morphing objects found in later Mystery Case Files titles, the cursed objects appear in various scenes, but only after you've visited them a certain number of times or when certain things have been completed.

Analysis: Yes, it's all very much like Mystery Case Files: Return to Ravenhearst, even down to the wandering spirits appearing to help or hinder. But that's not necessarily a bad thing, as Return to Ravenhearst is one of the best of the hybrids out there. With the increase of ever shrinking gameplay and ever easier puzzles, it's nice to see a game go in the opposite direction. Dark Parables: Curse of Briar Rose can be devilishly tricky. The hidden object scenes are tough, and although many of the door puzzles are iterations of ones found in other games they have taken the time to give some of them a unique twist, or to even create original and unique puzzles. A nice counter to the trend of the "dumbing down" of adventure/hidden object hybrids. 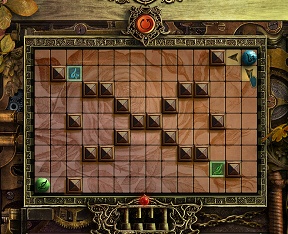 The artwork is stunning, with a hand-painted feel of a fairy tale that has fallen on hard times. Crumbling statuary, overgrown walls, dust, spider webs (accompanied by a giant spider that would put Shelob to shame), and other debris hide what looks to have once been a fantastically beautiful castle. Appropriately moody and spooky music and sound effects accompany the player as they wander through the nightmare of a fairy tale gone horribly wrong. Slow down and take the time to explore every nook and cranny of this fantastic world, it is well worth your while.

Is there a downside? Sadly, yes. Blue Tea Games is based in Hong Kong, and the English translation has a few quirks and problems. The voice acting is competent, but nothing to write home about, and although the story is sad, there are hints here and there that it could have been longer and more complicated, and definitely darker. It's almost as if they pulled back from the true darkness inherent in the older versions of the story. Though the game is longer than some of the hybrids on the market, it is still noticeably shorter than the one it most closely resembles, Return to Ravenhearst.

But is Dark Parables: Curse of Briar Rose worth playing? Most definitely, yes. One of the great bugaboos of hybrids is the feeling that the hidden object scenes are "tacked on". Having to suddenly go into an area and find 20 items unrelated to anything going on can take the player out of the story. Briar Rose solves that by working with the "find the pieces" method. Each and everything you pick up is used somewhere, eventually, keeping the flow of the story moving along. For anyone who likes hidden object or adventure games, this is involving casual gameplay of a type you don't often see anymore. And although the story is rather short, completion opens up a new challenge, going through again in hard mode, without the help of hints, the hint timer, or the ability to skip any puzzles. That can take a while, even if it is the second time around.

Dark Parables: Curse of Briar Rose is moody, atmospheric, gorgeous, involving, challenging, and fun. What more could you ask for in a hybrid? It even sets itself up for a sequel, which we can hope continues the quality of design and implementation seen in this game. It takes us back to a time before folk tales went politically correct; when bedtime stories caused nightmares; and when happy endings weren't always possible. So take a walk down the darker path of folk tales, and go rescue the town, and the princess!

Just curious - I played through this, and couldn't see why it got a :o rating for content. Did I somehow completely miss something that was supposed to be objectionable?

Not sure why it got the O rating, but people seem to be confused as to what content is "acceptable" for various ages most of the time...

As the review states, very much like the Ravenhearst. Not quite the same level - graphics, acting, puzzles and atmosphere are just a notch lower. I'm not sure it's exactly plagiarism, but the similarities are obvious.

That said, I found the hidden object puzzles more difficult than the Ravenhearst ones, mostly because the objects are fragments rather than whole items. They can be of smaller size than in other games, and as they are irregular, rather than easily recognizable shapes, I found they blended into the background more for me. A bit more challenging, which could be a plus, although I missed the fun of the junkyard-style mishmash of items in the other games.

Overall, a solid effort, perhaps a bit better than many titles, but not in the top tier. 4 out of 5.

Reviewer's comments to the editorial team: "I gave it a rating of yellow, although there is no overt swearing or anything it is a little dark for the kids, I think."