In Eipix Entertainment's flashy and classy hidden-object adventure Danse Macabre: Moulin Rouge, you've been summoned to solve the murder of a young woman at the legendary concert hall, and though the police think they have their killer, we wouldn't have much of a game if hat were the case. (Shortest game in history. "Oh, our mistake, madame, please go back home and enjoy some pastries." Credits roll.) As you probe deeper, you soon discover there's something seriously weird happening on the streets of Paris, and Sophie, the poor girl who was murdered, is just the tip of the iceberg. Luckily, you've got your forensic kit at your disposal, and despite the sneering of the local police, you're sure this "new science" will reveal the killer. With your own private coach, you'll travel around the city as you put together connections revealing suspect after suspect and discovering their motives, solving puzzles, hidden-object sequences... and maybe even polishing up your bartending skills a little. 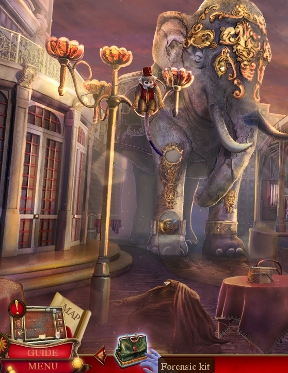 Looking for a mystery with just the right amount of intrigue and morbidity? Danse Macabre: Moulin Rogue has you covered with its tale of obsession and a lady detective who "just loves firing her mini cannon". Of course, it probably helps that everyone in this game is just thick enough to make your job a lot easier, like the maid who scolds you for coming into the house when her master isn't home and tells you that you have to leave, but has no trouble watching you steal everything that isn't nailed down in front of her. There's just something gleefully zany about the whole thing, like presenting the baron with proof roses came from his garden because they're mangy and riddled with spots and holes, and it gives everything a delightfully off-kilter feel. The whole thing is a bit more Agatha Christie or Miss Marple than it is any serious mystery with its doo-dads and monkeys, but that's part of its charm. Our heroine is never actually shown, but I've been pretending she's a three-foot-tall eighty-year-old lady walking around screaming about how the game is afoot while she waves her mechanical magnifying glass. (Which is just showing off, really.) Eipix has put together a game that looks and sounds gorgeous, with wonderful voice acting to go along with the opulent area design, and everything from the puzzles to the masked antagonists themselves has a wonderful faintly creepy vibe that ties everything together in an engrossing way.

Unfortunately, the game also loses some points for some seriously fiddly click detection and UI, that makes manipulating certain items and some hidden-object/forensic scenes far clunkier than they need to be. Chances are most players will find the game a bit too easy to prevent them from flying through it, so it'll be over in a few hours at most. That said, if you've been craving something a bit less oppressively dark and supernatural than most hidden-object adventures tend to be, Danse Macabre: Moulin Rogue is an easy recommendation. It has tons of variety, with clever puzzle presentations and hidden-object twists that keep things fresh, and the skeptical officer jerkface as a nemesis of sorts of a nice touch. Despite the whole murder motif, everything about the game screams "cozy mystery", something you want to sink into and enjoy for an evening. It's campy, it's creative, it's lovely to look at, Danse Macabre: Moulin Rogue is just plain fun with a story that keeps rolling along and all the disgusting hangover cocktails you could want.