Dogeron Kenan is having a bad day. Okay, a bad decade. A small time data smuggler in the corporate-dominated futuristic city of NeoSushi (formerly Tokyo), his job is to transport passcodes in his cybernetic arm, trying to keep one step ahead of both the lawful and unlawful who want to stop him. He thought this deal with Lime was finally a chance to get a little security, but safe is the last thing his life is right now. Every Retriever in town is out to get him, and it's just a matter of time before one gets lucky. It's going to be a long night. Cypher, developed by the Cabrera Brothers, is a piece of cyberpunk interactive fiction. Visuals and sounds accompany the textual aspects of the adventure, making for a new twist on the classic genre. 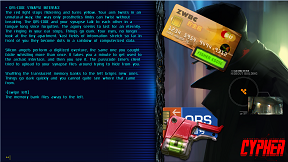 As with most interactive fiction, Cypher has you inputting text commands like EXAMINE BLUE KEYCARD, PICK UP BRIEFCASE, GO NORTH, KISS MELINA, or SHOOT CARLOS WITH SHOTGUN, to control the player character as he solves puzzles and explores the world of NeoSushi. There will be objects to pick up and use, characters to get information from, computers to hack, phones to call contacts, and, of course, the rabid band of mercenaries that will be chasing you around the city. On the left of the screen will be the Graphical User Interface, which will show snapshots of the world around you. Taking notes and mapping your location is recommended, as is reading through the accompanying manuals and feelies to become aware of the numerous special commands you'll use while playing, particularly the Do You Really Know How To Use Your QRS-CODE? brief, invaluable for navigating yourself around the game's version of cyberspace. 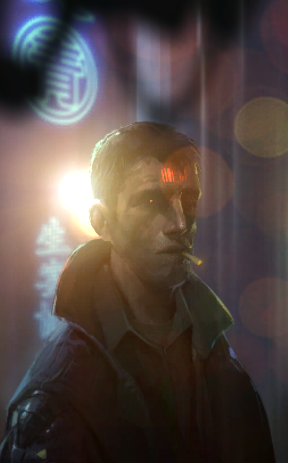 Analysis: Cypher's vision of a cyberpunk future is immaculately crafted in its grit. The game is dark, oppressive, and has atmosphere so thick you could choke on it. It recalls all the most notable works of the setting's tradition: Blade Runner, Snatcher, Johnny Mneumonic... even a little bit of A Mind Forever Voyaging. The writing flows to create a layered dystopia of a world that you would hate to live in, but should be happy to view through the safety of your computer screen. The graphics and soundtrack contribute to the game's immersive success in no small measure. Though an accurate description of Cypher would be closer to "text adventure with pictures and music", a good comparison is to the visual novel genre, where, though the writing is always central, graphics and sound convey in an instant what a thousand words could not: the splash of rain on pavement, the glare of a streetlamp through a smoggy sky. The feelies accompanying the game show the level of detail to which the developers aspired to in constructing their universe's backstory. Even as gameplay takes you from calamity to calamity, you'll be keenly aware of how the lived-in city of NeoSushi is just as much a central figure as each of it's malicious inhabitants. We don't want to spoil too much about the plot, but suffice to say, mutant cockroaches might be involved, and yes, Kenan visits a strip club at one point, since doing so is apparently de rigeur for cyberpunk protagonists. 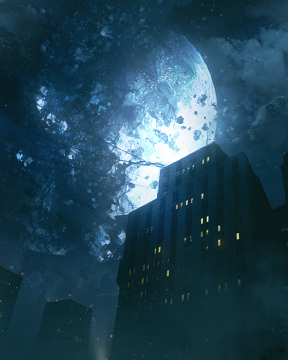 One only wishes that it was a city easier to navigate. Cypher text-parser was developed from the ground up, a state of affairs that has both it's benefits and liabilities, and, in this case, mostly the latter. There are none of the textual shortcuts usually found in such games, meaning even those used to Interactive Fiction will think they're doing quite an excessive bit of typing. And while Cypher's dictionary of verbs is impressively comprehensive, there will be more than a few times where you are fumbling about looking for exactly the right command. This feeling is most pronounced when using the in-game QRS data system. It's meant to be a Viewer Friendly Interface of the kind usually found when fictional techies are Hacking the Gibson, but one really hard to describe or navigate in textual form. To it's credit, Cypher's conversation system is one of the most deep yet encountered in interactive fiction, with most character having a proper response for just about everything you throw at it, and, with the manual to guide you, it's pretty easy to get used to the parser's quirks as time goes by. But if you're the type to throw a laptop against a wall when a game will accept "Turn Television On" as a command, but not "Turn On Television", you might want to give this one a pass.

Cypher succeeds as a gripping sci-fi yarn, albeit in spite of its mechanics rather than because of. However, the Cabrera Brothers are working close with the game's community to patch the engine up to expectations, and all indications are that problems with the interface are indeed being resolved. Cypher may not be quite be the herald of a new wave of commercial interactive fiction, but it is a rich, intriguing experiment that fans of the genre should find worth dropping a few Kongbucks on.

I was with you until the home-brewed parser. For the love of Mike, why?!? I am a big IF fan -- it's how I met Mr Cendare -- and the game looks visually cool and I like the setting. But I'm not sure I'm prepared to drop $15 for a parser that might not be up to snuff (versus TADS or Inform, or something like Hugo).