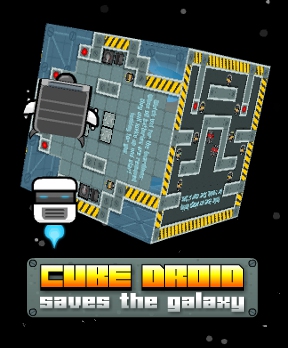 Evil squares are attacking the universe! Sure, squares might not seem like a big deal, but they really are! They're far too boxy, for one. Also everybody knows that squares aren't cool and who wants to live in a universe that's not cool? The universe needs help to deal with this. The universe needs Cube Droid, who's only happy to come to the rescue in Cube Droid Saves the Galaxy, a new sokoban-ish style puzzler from DevilishGames.

Cube Droid Saves the Galaxy is essentially a take on the classic game Sokoban, where you push crates around an area in order to achieve your goals. Cube Droid complicates this formula by adding in enemy robots and turrets to deal with. In each level your goal is to navigate the stage, collect all of the batteries and return to your ship.

There's not much to controlling Cube Droid. Use the [arrow] keys to move. There, you're ready to save the galaxy! You can push certain blocks by running into them, but be careful, since you can only push one block at a time. Getting a block stuck in a corner or two blocks stuck on each other next to a wall is a quick way to render a level unbeatable. If that happens, press the [R] key to terminate poor Cube Droid and restart the level. Likewise, a single hit will cause you to restart too, so keep an eye out for danger.

You're going to face a variety of nasty foes during your galaxy-saving adventures. There's Roller Saws that chase you around, Guardians that wake up after you grab every battery then chase you around, Lazer Towers that blast you if you cross their paths and several others. Choosing whether to worry about the mobile or immobile foes first is an integral part of solving each level; sure, you might have a plan worked out to get all the batteries, but how well can you execute it while being chased down or shot at? 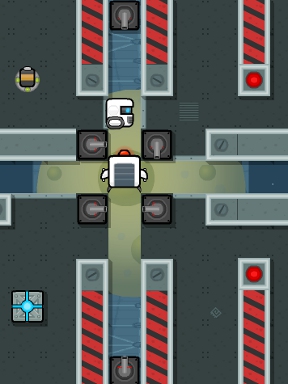 Analysis: Whether or not you'll like Cube Droid really depends on how you feel about Sokoban. This is a game that's all about planning ahead; it's vitally important to think each action through. If you don't, you're going to end up in an unwinnable situation or killed by enemy robots. That'll make Cube Droid cry sad, oily tears.

Cube Droid is presented in an adorable cute style. It uses some minor 3D effects to show off each level detonating as you clear it which are pretty cool, but generally you're going to spend your time looking at a top-down 2D view of each level. Everything is crisp, detailed and easy to make out. You'll be thankful for this when you're frantically steering Cube Droid away from a mob of enemies.

The difficulty ramps up steadily and there aren't too many spots where you can expect to get stuck. Persistence will usually see you through, and it's worth it; some of the later levels are impressively designed and a lot of fun to play. Beating a difficult level with a perfectly executed set of moves is a great feeilng and looks awesome too, like a sort of Rube Goldberg machine.

The main flaw in Cube Droid is how slow the proceedings are. Cube Droid putters along at a leisurely pace and his foes aren't much faster. Patience is certainly a virtue here, both in completing the puzzles and dealing with Cube Droid's two mile per hour speed. While it could be argued that keeping things slow will prevent players from making costly mistakes, DevilishGames may have overdone it here.

All in all this is a solid Sokoban title and fans of this sort of puzzle are bound to find something to love here. Puzzle gamers should also give this a shot, especially if they're chillaxed enough to deal with restarting levels and Cube Droid's slow speed. And action gamers? Well, Cube Droid isn't armed. Maybe in the sequel!

While this game is certainly in the Sokoban family, it is a pretty clear homage to The Adventures of Lolo series on the NES(http://en.wikipedia.org/wiki/Adventures_of_Lolo)

Several of the enemies/obstacles are direct clones of those in the lolo games and the basic game play structure (collect all items and then reach exit)is identical.

Steve beat me to the punch, but he's right. This game carries the spirit of the Lolo games quite nicely.

I half-expect to rescue a little pink cube at the end of all this, to be honest. :]

On the upside, it appears to have intelligently ditched the guessing game of when you'll get a power shot or where the enemy will respawn when you block it.

I like the teleport block concept, especially when you have to think about how not to get the blocks to touch.

On world 3 now, and this is a pleasant experience. It's been far too long since Lolo had his last outing.

Thanks for the review and the comments! I'm glad you liked the game :-)

Yes, inspiration definitely came from the Eggerland Mystery and Adventures of Lolo series and I'm glad it showed. We tried to make a game based on the same game-play without making a blunt copy, hence the similarities like the strange topdown/side view, the pacing of the game and some of the enemies. On the other side we wanted to get rid of some of the stuff we didn't enjoy too much back in the day, like having limited lives and fiddling around with the water flows ( and SirNiko hit the nail with his points as well ). Starting from that new base, all levels were originally designed which, by the way, was the toughest part of making this game.

Just a short reply to your comment in the review about the game's slowness; I can see your point because I do love fast action games as well ( see Tag Attack ) but this time we tried to keep close to the spirit of the original games which really is more about *thinking* how to avoid the enemy instead of outrunning them. I'd love to do a sequel with shooting and WASD/Mouse control, but that would probably bump the game to another genre :-)

Good puzzler; it's nice to give the grey matter a little workout. Though I have to agree that the complexity and difficulty ramp are pretty good, I don't really know what to think of the playability.
The abovementioned slowness of the game usually isn't so much of an issue, except at point where Cubes responds to a change of direction 1 step later than I'd anticipated on (causing him to get fried/shot/sawn in half and me to be forced to redo the level). On multiple occasions I had the idea that the response is just slighty off.

What does really take the (remaining) speed out of the game is having to watch a variation on the same cut-scene after completing every level, which in my opinion does more to annoy than contribute to the experience.

That just leaves a peeve over cannons not being able to hit the ship I'm entering (which according to at least 1 law of physics should be bigger than Cubes himself), but having trouble nor scruple to shoot me in the back while I'm nearly there...

All in all it's a fun game, which I'll prolly complete at some point, but not one that leaves me hollering for more.

Generally speaking, if you're failing a level because you're having trouble dodging an enemy you haven't found the correct solution. I've finished all the levels now, and with possibly two exceptions I could ensure my safety absolutely throughout the stage.

It was short and enjoyable, and the puzzles were pretty good. Like I said before, I'm glad to see the trial-and-error elements of Lolo were eliminated so the puzzle is left as a matter of pure logic. I really enjoyed the aesthetic of the planet being released from its prison with each stage.

I would have liked a little more variety to the stage design - graphical variations between worlds could have gone a long way towards making the game more exciting. Or at least, some more varied music.

All in all, though, it was a good game! The learning curve felt about right, and the puzzles felt like they explored all the game elements pretty thoroughly.

Some of the levels I like most are 5-6, 6-1. I was expecting the last level would be super difficult. But it turned out to be not as hard as I thought.

Thanks for your "civilized" feedback and critics. Generally the game has been received very well on the big gaming sites, so I'm definitely making a sequel. As soon as I can find the time, that is. Most of your suggestions made it already on my list :-)

Good to know there will be a sequel. It would be great if the new one comes with a level editor.

Cheers Cyang, a level editor is high on my list, but it's something only few people will ever use and it takes a lot of time making/designing/testing to make it stable and easy to use. Nevertheless, like I said, it's high on my list just because I like the idea :-)

Really nice gameplay and the difficulty (somehow varying) is good to not start to frustrate one. But I never figure out, what the rank is supposed to mean.

Gaah!
This is the mosty frustrating game ever. I don't know why, but in the later levels, my bot would randomly move multiple spaces even though I tapped the arrow key only once, meaning it kept overshooting its mark, running into lasers, pushing blocks too far, etc...
That turned out to make it pretty much impossible to play the final level. I finally gave up after about 50 resets and three page reloads.
It's unfortunate, because it completely ruined an otherwise great puzzler ...

I really liked this one. I had to use the walkthrough link in the game a couple times. That last level was tough ... even with help lol.

I really like this game to the point that I've replayed it about 10 times. Really wish that the developer would do the sequel that he mentioned 'two years ago'. .. :)

Love this game ... they should make an android version of it.

Thanks for the kind words after all these years!

Cube Droid is pending a sequel AND mobile version, but other stuff keeps popping up :-) It's definitely on the short-list though.