Petri Purho of Kloonigames has a reputation for churning out experimental prototypes in a matter of days. In 2007 one of these prototypes was the sandbox-style puzzle game Crayon Physics. The premise was simple — use a "crayon" to draw shapes that immediately come alive and interact with each other, the ultimate goal being to collect a star somewhere on the screen. The experiment was a hit, and soon it was announced that a full-fledged version of the game was in the works: Crayon Physics Deluxe. 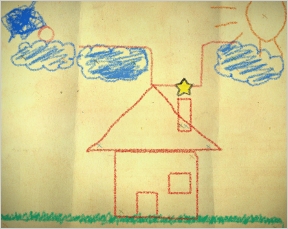 Each stage in Crayon Physics Deluxe features at least two objects: a ball and one or more stars. Your goal is to move the ball to collect the stars and finish the stage. It's that simple. Using the left mouse button you can draw using crayon-style lines. Click, drag, and when you release, the shape you made comes alive and is given mass. You can draw wild shapes, plain shapes, lines, hearts, stars, bacon, monkeys, and everything in-between, it all interacts using realistic physics. You can even build rudimentary machines that are powered by gravity, attach shapes using hinges, and give the ball a little boost by clicking on it. Don't let typical gaming conventions limit yourself, as creativity is the key to enjoying Crayon Physics Deluxe.

The game is laid out in a series of islands, each with several stages that contain puzzles to solve and stars to collect. Grab enough stars to unlock more islands that have more stages to play around with. Later you'll come across new concepts and items such as rockets that do exactly what you think they'd do when smacked with an object. And if you're feeling particularly adventurous, give the easy-to-use level editor a try. 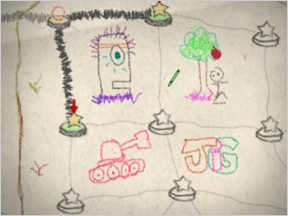 Analysis: It's best to consider Crayon Physics Deluxe as a physics-based creativity tool as opposed to a puzzle game, even though there are certainly puzzle-like aspects to its structure. The real purpose is to let your imagination run wild coming up with strange solutions to each level. Most of the time there's no "intended" solution, though a simple box or two will usually do the trick. Don't be afraid to play with the game's own rules, either, such as allowing the ball to fall off-screen so it appears back at the starting point. You aren't penalized for losing the ball, nor do you have limited crayon ink or a finite number of shapes that can be on the screen at once. Seriously, just go wild with this one!

The game is packed with a sense of playful wonder that shows in many ways. For starters, you can draw on the world map, and your doodles are saved even when you quit the game. You can also change the color your crayon draws with using the mouse wheel button, a feature that only exists for aesthetic purposes.

We all love physics toys, and Crayon Physics Deluxe is easily one of the best. It's built around having fun, not challenging your brain, and if you walk into the experience with that in mind, you'll enjoy every moment of gameplay from start to finish.

Just as a quick addendum, also available for iPhones and iPod Touches!

Ummm, It's not doing anything. I'm on this black-and-gray screen that is apparently the main menu.

The comic and commentary from Penny Arcade made me interested, but apparently I only download demos when it's featured here :D Thanks for the link!

Sort of works under Wine in Ubuntu but runs too slowly on my laptop to be playable :-(

Also, I'm using Firefox on Windows. Not a Mac. Or even a labtop.

Wow, what a cool game. It's somehow very relaxing, yet challenging at the same time. I would definetely buy the full version.

Reese, I don't think the browser will matter, seeing as this is a download...

I love crayon physics, it's definitely worth the price. I've spent more time on it at this point then some more expensive games.

Reece: You'll have to head to the Crayon Physics Deluxe forum to get technical help on the game itself:

Also, this game works very, very well in Crossover games (mac). Glitchy until you turn off fullscreen mode, and it's perfect.

The best physics game I ever played!!

Awesome! This game is absolutely awesome!
And I dont even play games ever!
Couldnt put this down once I trued it though, amazing game. brilliant.