A space ship. An explosion. An escape pod. A crash. It's just you and an alien planet replete with jungle creatures who aggressively attack you, lone guy in a well-equipped spacesuit. Capsized drops you in an unfamiliar world and gives you just a few tools to survive. Fortunately, a grappling hook and a number of guns happens to be amongst these tools, the former of which is handy not only for swinging around and pulling yourself up ledges, but for grabbing and moving obstacles. Other than that, you really have to rely on your wits in this gorgeously-illustrated but challenging physics/action game. 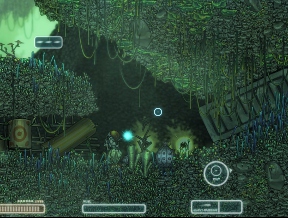 Capsized is an intense action game, and you'll realize this the first time a lizard digs through a pile of debris, knocks over a boulder and charges straight for you. Most of the gameplay is focused on exploring complex levels in a dangerous alien world, pushing your way through corridors and climbing up vast expanses just to see what's on the other side. Most of what you find will be enemies, but there are plenty of power-ups to come across, with loads of new weapons and ammunition to power your tiny little array of guns.

The grappling hook is arguably your most important tool, and by firing it onto walls and ceilings you can pull yourself around the world with surprising accuracy. Use it to gain higher ground, hold yourself against a certain spot, or to swing across dangerous gaps. Lots of things in Capsized are movable, such as stones, logs, or bits of debris. Latch onto them and you can tug them around the stage. Using these objects to explore the world and to fight enemies is a tough tactic to master, but you simply must do so in order to succeed. And survive!

While Capsized may look lush and feature a lot of physics-based environment manipulation, don't be fooled. This is an action/shooting game at heart, and even on lower difficulty levels, you'll die on many occasions, not to mention the adrenaline rushes you'll get when enemies attack you without remorse. Your character comes equipped with a health meter and several lives, allowing you to get rammed by a nondescript spine creature or step on an exploding plant without having to start all over. But even with that, you'll be caught by surprise a number of times as enemies leap out of pods or push through physical barriers to attack you. You've got guns, but sometimes they just don't do enough. Don't these alien foes know we don't want to be on this planet just as much as they want us to leave?! 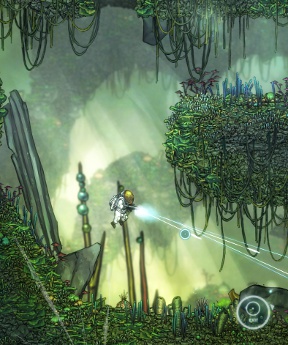 Analysis: Capsized is the best of retro gaming with the best of the modern aesthetic spackled right over top. It's an intense game on a number of levels, throwing blood-thirsty enemies in your face at every juncture, challenging you with physics puzzles, and putting loads of power-ups all around you but forcing you to figure out a way to retrieve them. Exploration is key in the game, but with each step you take you're likely to encounter a nest of alien enemies, and sometimes you're just to scared to have that happen!

The visual style of Capsized is phenomenal, with backgrounds, foregrounds, and character art far exceeding the quality produced by most indie studios, let alone big super-funded development teams. Hand-drawn art is always a great choice, and Capsized utilizes it well. The music by Solar Fields is also well-placed, serving up an atmosphere that lulls you into a deceptive visual submission. Before a land anemone the size of a horse drops on your face.

Capsized features a dozen missions with big, non-linear environments, unique objectives, and a scoring system that tallies points based on your speed, efficiency, and thoroughness. You can go back and replay missions to max out your score, and you'll be surprised how motivated you'll be to do just that. Capsized also features extra arcade modes to unlock, including local multiplayer modes, survival mode, time trials, and "armless" fighting. These go a long way to adding to the replay value of an already well-stocked game!

Capsized is a great-looking action game that gives "intense" a new meaning. Not for the quiet gamer or anyone who screams when a bird flies at the window, the challenge level will certainly give you a reason to keep playing, if the excellent visuals or intriguing physics-based puzzle design doesn't. And, if you're worried Capsized is too intense for you, try it on easy mode and you just might fall for it all the same!

Windows:
Download the demo (via Steam) Get the full version (via Steam)

It's probably worth mentioning that there's a demo on the Steam product page for the game, if you're unsure about a blind purchase.

Personally, I give it a B. It's good, and you'll get your (pleasantly small amount of) money's worth I think, but replayability is entirely dependent on how much you care about beating a level you've already completed with a better time than you did before.

I was more interested in this before I did a ctrl-f on the review for "Metroid" and got nothing. The atmosphere looked very reminiscent of Prime.

Haikiba: The game does have some Metroid sort of qualities, but it never really feels the same. It's more about action and physics puzzles, And being scared of enemies that want to eat you/shoot you/stab you.

One of my friends is friends with the developers, so I got in on some early-beta and pre-release testing of this game. :)

I wouldn't compare this game to Metroid, as the main campaign of the game is a linear series of levels, and exploring doesn't give you tools/weapons to unlock new areas. Aside from jetpack fuel, you start with all the tools ready to use. However, the levels are quite large, and can often be traversed in multiple ways (like the better bits of pre-3D Sonic games, in a shooty low-gravity way). That, actually, is one of the aspects I enjoy(ed) most - the "mobility tools" you have (grappling hook+throw, gravity ram, jetpack, wall jump) give you quite a few options for getting from point A to point B, or dealing with an inconvenient Large Indestructible Rock. The 2d physics allows for similarly open options when dealing with hostile native things, beyond "more bullets".

That being said, it's still a touch rough around the edges - good thing Steam allows for post-purchase updating. That being said, IMHO it's definitely more than $10 worth of entertainment.

It could have been amazing. It is fun and pretty, cheerful and cheap, then, in its very nature. This is like the budget games that one used to pick up for the old home computers. It could've been so much more.

I might advise picking it up if you like shooters, but waiting until it drops in price. A lot.

Tried the demo, found it basically unplayable and not related to Metroid in any way.

But if ppl think it's wonderful then fine.

Capsized is an absolute gem of a game. I knew what I was getting into with the low $ pricetag and to tell you the truth, it exceeded my expectations. The reviewer above hit it on the head with his perspective and commentary.