Legends tell of a king who gave to his only beloved a magnificent diamond as proof of his love. In that time, the land was rich and prosperous, but when the queen dies, the king falls into despair, and the beautiful land becomes a desert. People say that if you were to uncover the treasure hidden beneath the sand, you will finally have true love and never be lonely again. Hahaha, yeah, whatever, go back to the part about the huge diamond again? Buried in Time is a surprisingly fun and funny simulation game about a pair of archaeologists hoping for very different things from their floundering excavation. It's up to you to help them reach their goals by managing the dig, hiring new people, solving puzzles, and maybe even playing a little bit of matchmaker. 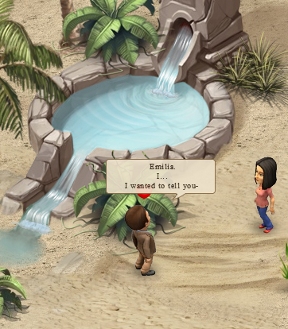 The bulk of the game revolves around hiring and directing your team to find artifacts and complete puzzles that open new locations in the valley. Each person has a set of skills that makes them good at jobs, like excavating artifacts, brushing them, or analysing them. Surveyors shouldn't be neglected either, since they help track down and flag spots where you're likely to find something buried. It's a simple matter of picking up a member of your team with the appropriate skill, and plonking them down at a station to get some work done. (The in-game tutorial will direct you where to go.) In addition to tending to artifacts, you also have to keep track of your team's hunger and energy levels, by sending them to the cots to get some shut-eye, or the food tent for some sammiches when necessary.

Artifacts are not only used to solve puzzles, but to complete collections. Why do that? Well, the more collections you complete, the more money you're given to improve your surroundings and hire new people. As new blood gets added to the team, you'll uncover more skills that can be used to your advantage, and get more hands to uncover new areas of the map. Each time you open a new area, you're treated to a cutscene that furthers the story and adds a new wrinkle into your team's lives. Will Bingham ever catch the eye of Emilia? Will they ever find the diamond? And what have they been using to brew coffee? Ewwww.

Analysis: If Buried in Time reminds you of 2009's Artist Colony, it's no surprise, considering they're from the same developer. While the character graphics have an odd, bobble-headed quality to their design that is vaguely disconcerting (how'd you like to see that peering out from your closet at midnight?), the game is cheerful and bright, with a big map to explore and a lot to do. The puzzles to open up new areas are a welcome addition, but I do with they were more frequent, and more challenging. Having the dog you'll get specifically hunt for puzzle-related artifacts was a smart choice, since it eliminates what would otherwise be a lot of frustrating searching to find all the keys you need. If you like, you can just sit back, listen for the tell-tale bark of discovery, and tend to the needs of your crew. Which you'll spend a lot of time doing. 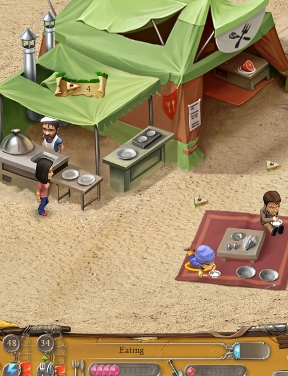 The frustrating thing about Buried in Time is that the team rarely seems capable of managing themselves properly. Not only do they rarely work unless you tell them to do it, they don't do so well at taking care of basic needs either. No, Bingham, the research companies won't give you grants because you're too stupid to stop and eat at the tent you just walked by when you're starving. Fortunately, if you manage to get two people to fall in love, hunger and energy decreases much more slowly. Later in the game, characters start thinking about each other, and if you make someone pick a flower and give it to someone they're interested in, they're automatically considered "in love" and that's it. So, while useful, it isn't exactly what one might call "fleshed out", and it feels like the developers really missed a chance to give their little characters more personality.

Buried in Time is a game with a lot of promise and ambition that doesn't quite live up to all of it. It's not quite as well-executed as Virtual Villagers, and the story could have been more front-n-center, but don't let that stop you; it's still fun and engaging, and a clever attempt at genre-blending that I hope we see more of. As it stands, Buried in Time is a cute and funny little title that will probably keep you busy for quite some time. Just remember to pack some extra underpants. That sand gets everywhere.

I finished the game a while ago--first time through I got stuck, next time around it flew by. I wouldn't say it's flooded with replay value, but good for a play-through, at least.

This one was a fun couple of hours, although it needs be said that the dialogue was a bit obvious and formulaic. I would've liked an option to just have all the dialogue appear as text immediately so I could get the story quickly and move forward.