Bouncy! Bouncy! Hippity hop! There's a fair amount of words to indicate a bunny moving around, and the protagonist of BuniBon, developed by Ludosity's Regnslöja, does them all! In this simple idea arcade game, you'll steer the little fuzz ball through 72 single-screen levels bouncing around hazards to collect the blue orbs. What will you find when you've beat all the bosses and completed all the levels?! 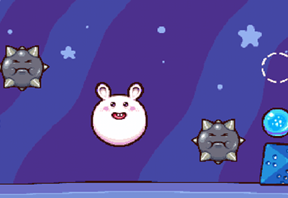 Move our nameless hero by tapping either the left or right side of your device to direct him toward that side. The duration of your tap indicates the distance of his hop. What you can't control is his vertical height (except when there's a springboard). When/if you find a level too frustrating, the level map allows you different paths through them, offering you several choices so that you're not just banging your head against the wall over a single level (instead, it's over multiple levels!). Get yourself to a square with the boss symbol and face an enemy requiring multiple hits to the head to defeat. Kill all the bosses to face the end boss in the purple, electricity region. And, of course, a little something special awaits those daring enough to beat all the levels and not just blaze through to the bosses.

Regnslöja has created something special in his simple, mobile action game. The high difficulty is balanced by the short levels, and the open options for the order you play the levels in make it even easier to handle the difficulty. Plus, with the introduction of new elements to avoid in each region to keep the levels interesting, there's little to complain about BuniBon. Help me, BuniBon Bunobi. You're my only hope!

NOTE: This game was played and reviewed on a Droid Razr. Game was available in the North American market at the time of publication, but may not be available in other territories. Please see individual app market pages for purchasing info.