The following is a reader-submitted review by Ben: BrettspielWelt is a free online board-gaming community based in Germany but open to players from around the world. We have previously reviewed online versions of several board games, including Settlers of Catan and Carcassonne, both of which can be found on BrettspielWelt. Board games are a much more popular pastime in Germany than in the United States. Many excellent titles, ranging from casual fun to serious strategy, have been developed in there, and BrettspielWelt (which translates as Boardgame World) samples some of the best! 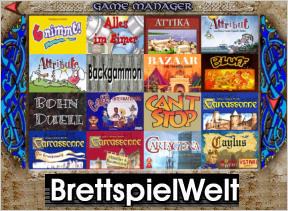 BrettspielWelt features too many games to review or even mention them all here. A complete games list, with links to the rules and interface details for each title, is available on the website. Specific games that are in the casual spirit of JayIsGames include Can't Stop (a fast-paced, high-risk dice game), Lost Cities (a strategic card game for two players), and Trans America (a rail-building game), among others.

The BrettspielWelt interface is packed with extra features that you won't have to worry about if all you want to do is play. It's a good idea to start by checking out the help section and the introduction page. When you log in you will find yourself in the Game Manager from which you can choose any of BrettspielWelt's 60+ games. Unfortunately the current version of the Game Manager hasn't been fully translated yet, so the interface will be mostly in German regardless of your language preference.

You access BrettspielWelt through a Java client that can be run in your browser as an applet, or downloaded. I recommend downloading the stand-alone client, as it can be customized, is more stable, and, once it downloads the necessary graphics files, starts much faster. Once the client connects to the server, you will be prompted for a name and password. If you register, your username will be reserved and BrettspielWelt will keep track of your gameplay statistics, but there are no restrictions on regular gameplay for unregistered guests. To log in as a guest, simply leave the password field blank. If you enter a username that is already in use, you will be prompted to choose another one.

The stand-alone client can be extensively customized by editing the file brettspielwelt.prop. In particular, you can set it to automatically log in with your name and password, and set your language preference. Registered BrettspielWelt users can participate in a community-building meta-game, gaining virtual wealth and prestige by playing games and investing that wealth in virtual towns, cities, and guilds.

Analysis: The interface is incompletely translated at the time of writing, making things a bit rough around the edges if you don't speak German. You can set your language preference to English, if it isn't already, by typing "/language en" in the chat frame in the main window, but not everything will be in English. Also, after you log in a few chat windows may appear with an annoying sound effect. Don't close them, they'll only reappear. Instead just minimize them and forget they even exist.

Each individual game has its own, unique interface, some of which are rather counter-intuitive, and none of the games has an undo function. However, the variety and quality of games available more than makes up for any technical shortcomings, and the BrettspielWelt community members are generally friendly and helpful. Visit BrettspielWelt and try as many games as you like!

BSW is a little rough around the edges... but considering all the GREAT games available on there, and the fact that it's totally free, this is one of the best gaming sites around. San Juan is pretty fun, as well as St. Petersburg. If you want English game translations, I'm pretty sure you need to go into that .prop file and search for language= and change it to language=en. You may want to check that before messing with the file though ;)

BSW is an amazing site... the level of game play there is terrific. Lots of really good gamers. They have lots of the very best board games.

It helps a lot if you already know how to play the games. If you ask nicely, sometimes you can get people to teach you the game online, but this can be tedious. lots of times you can get a feel for the rules by going to BoardGameGeek.

The only problem I have had is with other players being pushy and compaining about you not playing fast enough. Many of the games are quite complex and take a while to get to where you can play fast enough.

There is an meta game with towns and if you play enough you can build your own house in the town. English Town is a great place for finding people that speak english.

They are a little slow to add new games, but getting on when they add new games is the best way to learn the game since everyone is helping everyone else.

Overall its one of the real gems on the net.

BGG has lots of cool pictures of the board games, reviews, and a lot more. People also vote on the best board games, so I like to check how highly something ranks before I buy the game.

Jay: I really like your site, many times I want to have some quick casual game action, instead of investing the time and money in a serious game, and your site fits the bill exactly. Its one of my tabs in firefox I always keep availible so I can check out new stuff.

WHOA that's buggy..on my Mac, anyway. I have yet to successfully load and play a game, and I tried both online and on the downloaded applet. I'm really eager to give this a try and get into so many great games, but it ain't happenin' tonight.