Boonka is a cute, kid-safe and surprisingly challenging puzzle game with unique gameplay that combines strategy, timing and satisfying explosions. A luscious green paradise has been invaded by Skours, nasty black clouds who cut down trees and turn the whole world grey, chasing away the adorable rainbow-coloured Boonkas and generally being total downers. The sage Bababoonka introduces you to each tree (they have names — Glen, Susan, Dave) and gently encourages you through the process of growing them from a stunted stump to a magnificent specimen of hardwood by doing what you do best: make color matches and blasting them skywards! 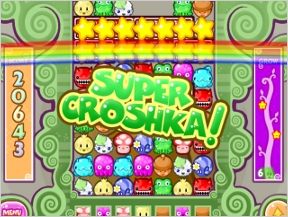 Initially, Boonka looks like a match-3 game, but there are several important differences. To grow a tree back, you need to link boonkas of the same color in a horizontal row (or other patterns if you're willing to get more complex), causing them to fuse together. These matches don't vanish, however, and instead you must put two fairies next to each other to create a rocket-like explosion, pushing linked boonkas up and off the play field. The screen fills from the bottom and if it hits the top of the screen the whole thing implodes. You can form special chains (called Croshkas) and discover new power-ups and awards as you play.

It sounds easy, but it becomes significantly more challenging as time goes by. Sometimes you may not get the fairies until your play field is nearly full and you need to make sure you've linked the boonkas (and the fairies) in such a way that the whole screen will be cleared, not just the columns directly above the fairies. Although it's a kidsafe game, your language when black clouds are hovering and you're about to get zapped may not be suitable for all ages. 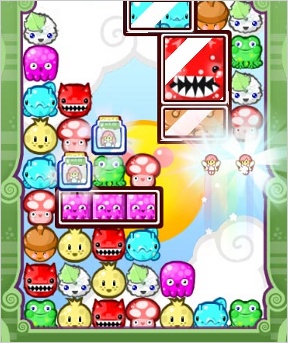 Analysis: Boonka has been compared with Meteos, but it focuses on strategy rather than speed, and it's not competitive as such. The gameplay variety is also greater with new strategies, combos and bonus opportunities unveiled almost every level. There are even a number of extra modes of play that round out the game's overall appeal quite nicely.

It's impossible to play Boonka without admiring its presentation. It's more like a playable storybook, complete with colorful visuals and characters no sane, sober and awake person could dream of. The graphics form a nice shell around an interesting game, though it would be hard to imagine Boonka being so fun without so much eye candy.

Familiar puzzle mechanics taken to a new level, Boonka is just the kind of polished gem we like to see shining from a crowded genre.

It's a real good game but i find it SO HARD
that's my brain bleed.

Seems buggy, crashed on my system, haven't played it since. Also told my my card was incapable of 3-D rendering (!)

I love the fortress boss music! It soothes me so.