Vampires. So many different kinds of vampires, aren't there? On one hand are truly frightening vampires who will shank you with their fangs in the middle of the night unless Van Helsing gives them the what's what with a wooden stake. On the other, we have the kinder, gentler modern vampire, who sparkles and just needs a hug and a hair gel refill. Both tend to take themselves seriously. Blood and Ruby, from Hitpoint Studios (creator of another fine adventure game, Guardians of Magic: Amanda's Awakening), features both the traditional bloodsucking villains and the new heartthrob type (he even has a cuddly scarf!) in its new adventure, but thankfully it doesn't take itself too seriously. Melodrama is the order of the day, from the histrionic organ chord which occurs when you finish a hidden object scene to the opening cut scene take-down which looks more like some people slipping during flag football. It all makes for an entertaining campy ride, with some clever touches along the way. 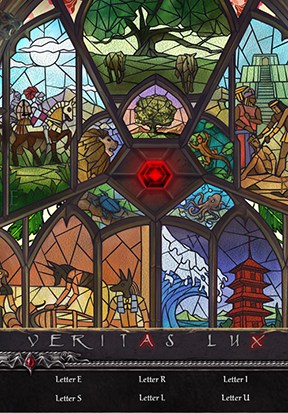 After her brother Marcus gets tagged out in a graveyard game of flag football—sorry, I mean, kidnapped by evil vampires—the titular Ruby comes to Venice in search of him. To assist her in rescuing him, you'll need to use your trusty cursor to pick up useful objects and employ them to solve so-called inventory puzzles. Of course, that flask of holy water isn't always just going to be lying around, as that would be too easy. Sometimes you'll need to search for it, and with the same mania that grips other hidden object heroes, you'll compulsively find other objects you're not going to use as well. A generous serving of puzzles, some of which are more like mini-games, and the merest sprinkle of spot the difference, tops off this recipe for adventure game enjoyment. Just don't forget the garlic.

Analysis: Blood and Ruby does not immediately give you instructions for puzzles, although you can click on a question mark button to get them. Unfortunately, sometimes these instructions are a little vague, telling you your ultimate goal, for example, but not the rules for how to get there. The skip takes a fairly significant time to charge, as well, so this is a recipe for running to the walkthrough. On the other hand, the hidden object scenes are extremely player-friendly. Too many games with dark themes think that means dark, monochromatic scenes that have your straining your retinas to tell which of the jumble of gray shapes is your desired knife or necklace. The art is excellent, and the item text is concise and descriptive. The hint button charges pretty fast to boot. 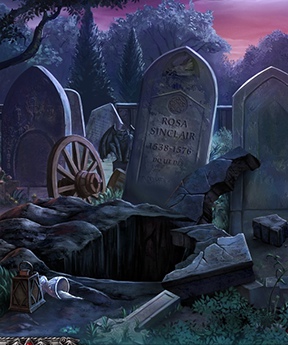 As I've already said, the plot is on the hokey side, so your individual taste for hokeyness is important. The demo hams it up right from the opening cutscene, so you'll be able to tell right away if it's something you enjoy. That said, the writing truly isn't bad. There are even some genuinely creepy moments like the murderous marionettes. If the phrase "murderous marionette" in itself doesn't creep you out just a little, you're too jaded by far for this game.

Sometimes there's a little bit of gameplay/story incongruity. There are several times when, plot-wise, you are in deadly peril and need to act fast by quickly using objects to conquer various threats in turn, but since gameplay-wise, there's no timer, it saps the urgency out of it. There may be a vampire ready to spring at you, but you as the player can leave the game running and have a shower if you like; the vampire will still be crouched there when you get back. The ending cutscene is quite brief and abruptly fades to credits, which is particularly disappointing given the many fine cutscenes up to that point.

The last major thing I want to single out for praise is the map system, which is not only easy to use, but even gives gentle hints about where to go next, with an exclamation point indicating an area of interest and a number indicating hidden objects to find. At about three and a half hours for my first play through, the length is a fair value as well.

Match the twin objects to find your brother's room number.

Find the right order to add the ingredients. Don't worry about making a mistake - it will not erase what you have done before. After the puzzle, you will have the Garlic Potion. Screen

Mask Spot The Difference Puzzle. There are six differences to find. Screen

The Museum and Fountain of Life

Sneaking Onto The Ship

Getting Onto The Ship

How To Destroy The Fountain

Lots of fun and deliciously cheesy. I'm glad I decided to purchase this one, so thank you for your helpful review, Joye! Although I also got Margrave Manor with it, and that was a gigantic, regrettable disappointment :(

Oh no Trinn! My brother gave me Margrave Manor for Christmas and it was hugely disappointing.

Blood and Ruby on the other hand, I played the demo and had to buy it. The sinister music everytime you located an object cracked me up. I thought the puzzles were great, and I like when a game incorporates hidden objects that are generally true to the period they're set in, and to the general context of the game.

My only gripe was that after finishing the demo, the rst of the game wasn't much longer, but it was still definitely worth playing.

Really loved this - even though I played it on mute so I missed out on the music, it was a delight to play. I hate hidden object games that are practically impossible to complete without using the hint button, so this game was a delight to play - although not silly and easy, the scenes are well lit and all that :) I found the story interesting too, light hearted but I also really wanted to find out where her brother had gone :D liked the 'quick find these objects before the vampire gets you!' bits too, they made me laugh :) highly recommended

Match the twin objects to find your brother's room number.

Find the right order to add the ingredients. Don't worry about making a mistake - it will not erase what you have done before. After the puzzle, you will have the Garlic Potion. Screen

Mask Spot The Difference Puzzle. There are six differences to find. Screen

The Museum and Fountain of Life

Sneaking Onto The Ship

Getting Onto The Ship

How To Destroy The Fountain