New York, New York, a wonderful town, the Bronx is up and the Battery's down... If you love playing hidden object games without mucking about with all the adventure overlay, then check out Jolly Bear's new release, Big City Adventure: New York. 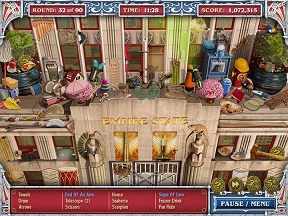 Like its predecessors (San Francisco and Sydney), Big City Adventure: New York is a pure hidden object game, composed entirely of hidden object scenes dotted with a rotating series of mini-games. To begin, pick an avatar from a family of six vacationing in the big city (mom, dad, grandma, grandpa, brother, or sister). A cartoon map of New York appears and shows you your first destination. Once there, find all the hidden objects on a list and you will segue into a mini-game that when completed shows your next location. Play your way around New York, learn fun trivia facts and history about the locales, and garner points for finding objects as well as bonus points for coin collecting or finding items quickly.

Gameplay is very straightforward, so the opening tutorial is almost unnecessary. Each scene and mini-game is timed, and you gain points for every found object. Bonus points are awarded for quick-finds and time remaining at the end of the scene, so speed is greatly rewarded. Be warned: multiple wrong clicks steal 30 seconds off of the clock! There are hint coins in each scene which can show you objects or even add time to the counter. If minding the minutes isn't your thing, you can skip the timer and play a relaxed, untimed mode.

The artwork is bright and photorealistic, although a bit on the cartoony side. There's a lively soundtrack which is at the same time surprisingly unobtrusive. The mini-games include a variety of well-known games, pipe puzzles, jigsaws, hidden match three, etc. Although the same mini-games come back again and again, they get more complex or must be solved in less time. This keeps gameplay interesting, especially in the upper levels. As you play through the scenes you will also acquire a few "skip game" coins, allowing you to skip some of the mini-games if you don't like the game or it is too difficult. But beware, you won't accumulate very many skip coins, so use them wisely! 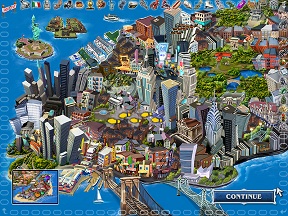 Analysis: If you like hidden object gaming but don't want to go through all the fuss of the hybrids (solving problems, listening to dialogue, trying to keep up with a story, etc.) then Big City Adventure: New York is for you. Each scene is preceded by a postcard with a fun fact about the place you are about to visit, but that is the extent of the story.

Kudos must be given to Jolly Bear for bucking a recent trend: downsizing casual games to a three hour playing window. Jolly Bear, who also created Age of Oracles: Tara's Journey, has actually increased the size of this, the third in the series of Big City Adventure Games. Whereas San Francisco had 60 HOG scenes and Sydney 75, Big City Adventure: New York contains a staggering 90 HOG scenes (30 locations, each one visited three times), with mini-games between each scene. Even if you are the quickest hidden object fiend on the planet, you're still looking at a minimum of four hours gameplay. Most of us are looking at lots more.

Even more fabulous is the replayability. Every time you re-enter a HOG scene, the list of objects to find is generated randomly. If you've made it through the game once, go back again and see if you can beat your best time in each scene (which is recorded), the highest points for each scene (also recorded), or just enjoy finding objects all over again. And there's lots of objects in each scene to find, so there is very little repeating, even with multiple visits.

After so many recent disappointments in the length of casual games (especially the HOG games), it's nice to find a game that instead is ready to offer you hours and hours of fun, casual gameplay. So belt up your fanny pack, slather on the sunscreen, don't forget your camera, and enjoy your vacation!