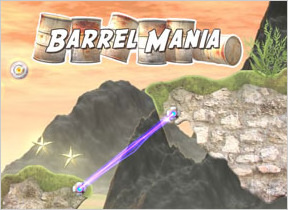 Everybody likes flinging around barrels full of toxic waste, right? Toss, tumble.... Oops. Well, perhaps not in a real environment, unless you are a law-breaking factory owner with questionable ethics. But, when tossed across a gorgeous fantasy landscape, lined with carefully placed adjustable platforms and forces, it isn't so bad. When you get to clear the way with dynamite, and watch things explode... now we're talking.

In Barrel Mania, a new downloadable PC game, created by CGS Software using the Newton Game Dynamics physics engine, it is your job to get these toxic barrels to their dumping grounds intact. The trick is doing it with only four tools, or less. Barrels will roll along stable platforms or bounce on rubbery trampolines, either of which can also become walls or protective ceilings. Adjustable "forces" can be pointed as you please, defying gravity with invisible winds. Finally, some obstacles, such as mines or boxes, can be blasted away with dynamite.

After the first few levels, where you are introduced to your items one at a time, you'll begin to use the objects in combination. So, as your barrel is released from its magnetic hold and tumbles across the level, exploding chain reactions can unfold. Watch out! As the levels get tougher and larger, electrified gates, magnets and bumpers may throw your barrel off course--or simply blow it to pieces. 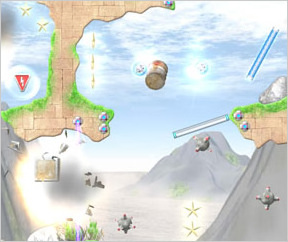 If your barrel explodes (releasing questionably gaseous contents), don't worry. Adjust the elements along the path, and try again. It can be tricky; each time you start a level over, the variables may be slightly different, causing your barrel to react in wildly different ways. You can try as many times as you like, even trying to collect all of the bonus stars, scattered along each level. The more stars you collect, the better your ranking at the end of the level. Leftover pieces can also increase your points. In higher levels, you may be given more than one barrel, which can be opportunity for more bonuses or more disasters.

Both the physical and graphical interfaces in Barrel Mania are smooth and elegant in design. A variety of screen resolution options are offered at the beginning of the game (including the standard but awkward laptop size) so the game will look great on any monitor.

It does, however, have one glaring drawback. With only 30 levels, this one leaves you wanting more—without giving it. I adore games like this, but any physics-simulation/building game needs to include a level editor, and a way for users to share the levels they've created. This increases the replay value by many times... but Barrel Mania just doesn't have it. However, the limited number of levels are fairly complex, so trying to beat your own score is still an entertaining experience.

While I really hope that the fictional company you are working for, DCAE (Don't Care About the Environment) doesn't have a real-world counterpart somewhere, I think you'll have fun playing.

This is a hard game. It's very difficult to get the barrel to do what you want. But it's made even more difficult due to the "randomness" factor - the barrel seems to act differently each drop. So even if you have a setup partially worked out it might work differently each drop, making the process of finding a working setup even more frustrating. For me, that made a challenging game just irritating - it's hard enough without the barrel being so unpredictable.

somehow you forgot to add the Mac Windows Part of the Article!

I like this game. I've only played about 20 minutes of the demo last night and was happy to see that I could scroll through larger fields in later levels.
That "randomness" isn't very random at all. I've noticed maybe 2 different bounce reactions when the barrel his the ground.

Sometimes it takes 2 or 3 small circuits between forces till the barrel goes the way you intend...if you did it right.

Seemed to me like it's less random and more nonsensical. I have a perfect path going which will repeat itself every time. Then I change something way at the end. Suddenly it stops working back at step 2. That's a game breaking annoyance in a step by step physics based game like this.