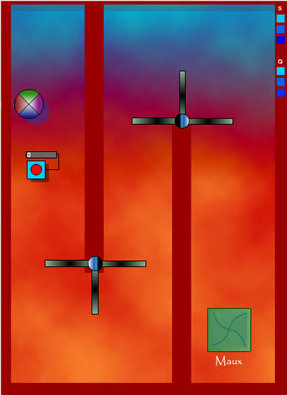 Digital media artist and UC Davis student, John Cooney, has produced this highly addictive Flash action arcade game, and he has made it available for the world to play on his website, jmtb02.com.

Ball Revamped: Metaphysik is a game of dexterity and timing, requiring the player to guide a multi-colored ball to the goal to complete each level. Score is tallied in seconds, with the lowest score being best.

The starting point for each level is the top left corner of the play field, which is represented in 2D and viewed from the side. The vertical orientation of the game suggests a bit of gravity physics influencing the ball, and this fact can be seen as the ball accelerates down as it is released.

Using just the arrow keys for movement, you will need to press the up arrow just enough to suspend the ball's rate of fall and balance it in mid-air. Some levels are maddeningly difficult, requiring you to make complex horizontal movement whilst balancing the ball's vertical position. And if that weren't enough, there are a variety of devices, timers, switches, and other objects that exist to thwart your advancement through the levels.

In Metaphysik, there is no concept of a 'life'. If the ball hits a wall, or most any object except the goal itself, you simply restart the level again. You may try as many times as you wish, although your score will continue to increase as the seconds tick away. The game features 125 different levels and a final boss. And if you need to see how any of the levels is completed, John has a video on his site of someone completing the game in 346 seconds—which would be unbelievable if it weren't for the video.

As I mentioned before, the game is difficult, and yet it is built upon a simple and basic core gameplay mechanic. The ball physics make the ball behave as if it were super light, and the lightest touch on the keys will affect it slightly. As it is, I had to use both hands on the arrow keys to be able to get up to level 40. There is no way to save your progress, so if you get tired and want to come back to it later, you will have to start from the beginning all over again. A little effort with Flash's local shared object could have avoided this one significant flaw.

All things considered, the game features nice visuals paired with excellent level design that together forms an addictive little Flash game that's hard to put down.

Thanks to Capuchin for suggesting this game.

You're very welcome for the game, could you change my name to Capuchin? Kind of my online alias, was'nt expecting a mention, I can email you to confirm it's me if you want. Thanks again for this great site you keep.

Wow. The idea is very simple, but it's both challenging and highly addictive. Finally beat it after an hour of playing. The very end of the boss fight seemed almost impossible.

this game is great!!! I cant get to the finish, though.

Thanks, John! And I appreciate the visit and leaving a comment. Glad you like the place. More games please. =)

OK maybe I'm completely inept, but how do you start the game? All I get is the ball with a line and . I feel like an idiot asking how to get by the very first screen, which isn't even in the video.

Wow. that was really complicated. It was very frustrating how the level would reset automatically, and it'd take a while for me to register that. : )

Michael - simply click the word , it's a button that starts the game. =)

Oh man, that was bad. I guess the problem was it told me to use the arrow keys so my hand wasn't on the mouse, plus it doesn't look like a button.

So what was your score, Steve?

This game is super fun, but not nearly as hard as everyone says. Ive beat it in 366 seconds, 40 deaths

It has come to my attention that the game runs faster (gravity) on some computers than other. It doesnt relate to the actual computer speed (CPU, RAM, Hard Drive RPM or anything) but on some other factor.
At my house I can get 553 seconds beat, 62 deaths.
Friends house: 354 seconds, 39 deaths.

Yea, I am just kinda sorta bad at this......lol it takes time to get used to I guess!

Afer the 5-4-3-2-1 level around level 100 my screen just went black. Did my thing just crash or is this just a different level thats just black and i hope somehow i find the square?

gahhhhh I only got to lvl 58 when I went crazy

hey Max, after the 5,4,3,2,1 thing, your computer must have crashed, because a huge square thing comes out and you have to kill it. I did and I beat the game!!

but the ball revamped 4.5....? I got to like level 28 or something, the level is called "impossible?" and I guess it really is. but this game is da bomb!

The game was fun until I got to "master square". then it took me 2 minutes to figure out what's going on and it was just annoying... but i finished it anywhoo

WOW! that was hard. my fantastic score was...

I played a few diferent games because I got mad on level 94 and there was no pause button... at least I don't think... I had way too many deaths. XD

I played a few diferent games because I got mad on level 94 and there was no pause button... at least I don't think... I had way too many deaths. XD

P.S.
That is NOT Master Square. That's Mistress Square (as denoted by Master Triangle in Andromeda "You may have deafeated my sister, but you will never get past me." or something like that.

Thanks, Hampster. I've emailed John to see what's up with his page. It's not loading for me either. I expect the game will be back online shortly. Cheers!