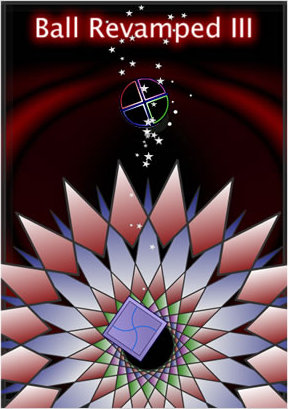 John Cooney has just released the third in his series of Ball Revamped games, and this one grew so large that he had to split it up into two parts: Andromeda and Gemini.

Like Metaphysik to come before, this game is an action arcade game in which the player balances a ball while moving it through a maze of obstacles toward a goal. This time out, John implements levels larger than the game view window, which makes finding the goal an additional challenge. As the ball is moved, the play field scrolls smoothly both vertically and horizontally. A similar game that uses this technique is Dyson's The Ball Game, which was reviewed here last month.

Controls are the same: use the arrow keys by tapping lightly on them to influence the ball in the direction desired. Avoid walls and moving objects, roll over switches to activate them and open gates.

New to this version, in Gemini, stars exist that change the size of the ball when rolled over: green stars make the ball very small, pink stars make it very large, and blue stars return the ball to its normal medium size.

There is a lot to do in this game, and it will likely keep you busy playing for a long while. The game boasts a hundred different levels split between the two parts, but there are actually many more than that. Many of the levels are very similar, or are duplicates of a previous one. This is especially true towards the end of Gemini. There is still no save feature, and it is sorely needed with a game of this length. Still, if you liked Metaphysik, then you will likely enjoy Andromeda and Gemini, too.

Update: John keeps moving his games around. Now they are located on Newgrounds, and so the above links have been updated accordingly. You will have to click on the "Play Game" button on the NG page to play the game.

Woah! harder than the last two, Well Done. The ball was much harder to controll with more momentum though.

wow, and I thought the second one was awesome...

My only complaint is that I'm not a big fan of the "starry aura" that follows the ball. Especially when the ball shrinks down in size. It makes it a little harder to see the ball's edge and judge how close one can get to the bounderies.

But this game still rocks!!
^^

Can't stand it. The touchy controls are more trouble than they're worth.

That was really fun, however i feel with a tiny little bit more time put into it the stars couldve come from the balls center and made to be behind the ball and it wouldve looked alot better.

Overall quite fun, I found it quite easy though, I suppose with that kind of idea its hard to make it hard, the jelly fish levels were just infuriating, having to wait for them.

I agree Capuchin. It seems that the game was rushed to complete. He might have spent more time on tweaking the levels emphasizing quality over quantity. He might have finished in about the same amount of time and increased the fun factor two-fold. There's a lot I like about what John did with the game and the engine, and yet with it being another game like the first, he probably could improved it even more.

Is it just me or doens't the game work with firefox? though it could just be this messy computer I'm on right now.

I played it with Firefox, and it's the browser I used for the screen shot, too.

It seemed a lot shorter than the other one...but the boss fight was fun.

The game was extremely expansive to make. The levels were almost 8 times as large as the original, meaning that level design was extremely difficult and tactical to make. On top of that, the game was approaching 7 weeks or work, and the levels were not even completed yet. It is true, gemini does start to sprawl out a bit towards the end. But it draws the question... how do you make unique levels? By the time you played level 100 in gemini, you were playing my 375th level I have created in the whole series. So yes, you can see how levels could be repetitive. I also set a deadline, which I need to stop doing, because it just makes me rush.

Its very hard to outdo this game with every new release. Thats why I have decided that this is the last one, and thats why these two are the last in the series. I cant imagine making it any better or anymore interesting. It was an incredibly fun series to make, and being featured on the BBC was more than enough to make up for the insanity I went through tweaking the engine on this last one.

Either way, another great review, and your sites still kickin! Keep it up!

i cant find Ball Revamped 1! where could i find it? do u have a postable url or somthing?

I'm not sure if there was a "Revamped" #1, but you can try sending an email to John at jmtb02.com for the definitive word on it.

I believe you can find all of John's games at the same site.

Thanx jay. i found johns website today and forgot about my post sorry to waste your keyboard. i use lots of different names posting here and i just wanna say you are awesome. i always come back and have my questions answered. keepy uppy the goody worky!

I did not like it at all. very anoying.

Good play. one of the early levels was incredibly frustrating, to the point i went midevil on my keyboard. but overall a very good entertaining game.

Can you please update the link for all the ball revamped games as john has changed the site a bit. He is also looking for donations for his next edition of which there is a demo on his site

Thanks, Pete, for the heads up about the broken links. All of the game links for this and Metaphysik have been updated. Hopefully John won't be moving his files around again anytime soon. Cheers!

there,s a ball revamped 4 now. it's the best one too

In Ball Revamped III: Andromeda, my grade was:

In Ball Revamped III: Gemini, my grade was:

what is the little ball like thing at the endof gemini? If anyone knows tell me

The final boss in Gemini is actually the classic ball! (Take a look at the other games and you'll see the similarity.)

After playing BRIII: Gemini at least 15 times, I still consider it one of the (if not THE) greatest game on the internet! I absolutely love

battling Shape-Shifter of Death (1st part of boss) and Doom (2nd part; I had to call them something! (not official names))

The music is the best part of the game besides

! I really want the music from the entire game, but I don't know the names of any songs, so I can't find them on Flashkit.com (the only place you can find the music, I think). If anybody knows the names of any of the songs so I can find and download them, that would be cool!
LOOOOOOOVE BRIII: Gemini!

(Gemini) I think the boss battle would be fun, but the other parts of game is very...HARD!!! These controls suck! I've come so near to the boss battle but never got to it!

I'll take it back. Now I will fight the boss!