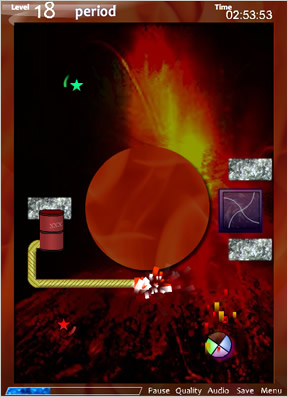 Ok, so there's this ball. And then there's this square. You gotta get the ball to the square. How complicated could it get?

Plenty complicated, it turns out, in this absurdly fun and addictive game from John Cooney and his prolific jmtb02 studios. What sets Ball Revamped 5: Synergy apart from other physics-based games is how well-executed each element of the game is; the ball responds beautifully to the lightest of touches, the levels constantly change themes and add in new and creatively frustrating obstacles, and the controls are simple and self-explanatory.

The structure of the game is simple: 10 levels of increasing difficulty, based on a common motif, is followed by a "maze" in which the player finds the portal to the next set of 10. What keeps this from becoming repetitive is the constant introduction of clever and often confounding twists in the form of little, harmless-looking stars floating in the levels. Passing over those stars may turn your ball into a rock (with the corresponding increase in "weight"), a bomb or a daisy, surround the ball with a pool of water or start a fierce wind blowing. Expect to die. A lot. The game helpfully keeps track of your number of deaths—I'm up to 33!—and once in a while will even reward you with cheerfully-worded "achievements" celebrating a particularly egregious string of failures.

Analysis: This game is some serious fun, a simple concept dressed up with some ingenious ideas and a lovely dose of humor. My only criticism is that a few of the levels are a bit too difficult and may cause some players to quit out of frustration. Right now I'm stuck at level 53, trying to get my rock-ball to make it over a spike without hitting the ceiling, and it's just not gonna happen. Unfortunately, if after another few (read: few hundred) tries I don't make it, I may have to move on.

For those of you who do finish, however, you may be pleased to find available a full-featured level editor nestled within the game's main menu. Use it to create and share entirely new levels of your own design to confound and frustrate your friends with. Replay. Ball physics. Hmm, recognizing a theme here? ;) Prepare to be addicted.

Check out other games in the Ball Revamped series.

btw, I think that it would be good to link back to the other ball games :)

You reviewed this late. I already played this before you reviewed it.
Oh, for level 53, you need to press up RIGHT AFTER YOU BECOME A ROCK.
FIRST POST! That's new.

I have worked SO hard on this spoiler.

Wow. This version of Ball Revamped I actually really really like. It was fun to discover how the powerups combined and I did suprisingly well (beat it in 15 minutes with 175 deaths). The artistic detail was very nice as well.

Great game! I love the whole Ball Revamped series, and this one is the best yet! Here's hoping for another sequel!

Now on to the spoilers:
Achievements I have so far and how to get them:

Complete 3 levels in a row without dying.

Beat a level in less than 3 seconds (easiest to do on level 1).

Play each level set in the game. (must do at least 3 play-throughs to do this).

Beat a huge level without dying.

Beat the game with less than 100 deaths.

Reach 2.5 kph (Get this on a huge level by holding down at a long down section).

Beat the creator's time (not exactly sure what it is).

The only achievement I do not know how to get:

She Loves Me Not. Prolly has something to do with the Flower Power Up

Might just be me but the controls seem to have gotten really weird on level 13. Like they're delayed almost, or really touchy. Result of the fire powerup? My computer just going nuts? I just suck at this game?

Well saving and reloading seems to have fixed it so I guess it was my computer.

Figured out how to get the achievement CheezyBob couldn't figure out.

Die ten times with the flower.

More Trivia:
The walls on Lilium depict some kind of plan for Ball Revamped 5.
The user levels have a bug; you die even if you dont hit a wall.
When you try to obtain the She Loves Me Not acheivement, when you hit the wall the first time, say She Loves Me. The 10th and final hit on the wall would be She Loves Me Not.
The walls in each of the realms contain some kind of relationship or contrast to the background.

All I can say is that I'm SO glad you get unlimited lives.
Cool sound track too!

I like this game, but preferred III and IV.

You're having trouble on level 53? But it's not even necessary to pick up the stars on that level - you can just head straight to the exit and not worry about being a rock.

There are quite a few levels where it's very easy to avoid picking up stars and thereby making them trivial, and a few more where it's not easy to do so but it's still easier than solving the level after taking the power-up. Some of these are intentional, but for many of them it looks like somewhat careless level design.

This game is a lot of fun, though, and that's really all that matters.

It's pretty, definitely the most polished of the series.

What really irks me though, is that

you can skip levels depending on where you go in the mazes at the end. I went from level 10 to level 41! But there was no indication that "Solidago" meant 41-50! What if I wanted to play levels 11-39? I have to start over from the beginning.

Skipping levels really bugged me as well. I kinda played the game halfhearted and still beat it in 15 minutes...

Oops, sorry, I didn't mean level 53. It was a few levels past that, where you had to float the rock over this big spike without hitting the ceiling just a little ways above it.

But yeah, I really loved this game. I'm generally more of a point and click/story heavy type of gal, but this one definitely grabbed me.

hey! when i make my own level, i cant rotate or erase the 'objects'!

I kind of liked Point Zero, I thought it was somewhat stylish.

This is my Master Time

the level editor is really cruddy

I noticed something about the level set names!

I beated the game by using:

Did anyone do the same thing as I did?

Stars can only be used once per level per life, but stay with you for the entire life/level once grabbed. Once you get one, that color on the ball lights up.
Blue: Bubble (ball can pass through grates)
Red: Fire (ball can light fuses)
Green: Flower (ball gets huge and looks like a daisy)
Purple: Wind (wind starts blowing left to right)

2-STAR COMBOS (order does not seem to matter)

71-74: Pick up all three stars, the walls will rotate, get to the exit
whenever it's uncovered.
75: The level rotates too; head for the top/left exit.
76-77: After getting all three stars, the ball becomes a jellyfish; just head for
the exit like normal.
78: Get the blue star, then hit the purple star in a line with the exit.
79: Avoid the purple and green stars and head right for the exit.

Collect all the stars to get transported to the final level
(101).

Get to the exit 15 times to beat the game. Prepare to die a lot if you're not familiar with the pattern. The exit locations are: under the shield in the middle of the level, on the top right, and under the hilt of the sword.

I beat on the first day I saw it(not on jayisgames)! Oh, by the way,

The huge level of Amanthurus(is it spelled that way???)is in slow motion, so it is hard. I only found one exit, but there might be more.

I aggree with chris. I beat it at 9:32 and got the acheivement. (Woot! 4 Acheivements, one level) I like the music for the "Swordfight" it is death trigger 3 by zerobass. I am not he!!

This is a nice game. August:

Once you go through the gate, you have to go into the left exit.

Normal: Go down and then go right and then decide if you should go down or keep going right. Go down and then pass the labyrinth into Eucharis. Or go right then up then right again for Solidago, or go down avoiding Solidago and go through another labyrinth (this one is narrower), and reach Achillea.

Eucharis: Go right and down to a pentagon wall, to the left is just a plain exit, it's obviously fake. Keep going right and collent the green star and then the red and choose whether to go up or down, just choose and go. Each one has a bomb cross, wait for it to explode, go through a pentagon hallway up to Centaurea. Or go down and go through a path that gets more narrow and finally into a hook down into Amaranthus.

Centaurea: Go down and right together. You can try and risk yourself avoiding the blue and purple stars, but is only preferred to experts. But if you can't get the right angle if you fail to avoid the stars, you'll hafta try again! You'll find four exits, the two on the outside are fake, the two on the inside on the left will take you to Allium on the right Arachnis.

Allium: Not too much here, just go through the labyrinth to reach Lilium. That's all there is too it.

Solidago: Not too easy, just choose to go left into Amaranthis, or go to Centaurea by also going left but down and then right.

Amaranthus: The realm I hate the most. The moving walls could crash your computer if you have very low quality, and then just choose which way to go, up to Allium or Down to Platycodon.

Achillea: The hardest realm to reach in this game. But is actually the easiest boss realm. Just go through the circular hallway, and choose left or right, which will lead into Centaurea and Amaranthus respectively.

Arachnis: Easy. Just go through the hallway and into Lilium.

Platycodon: Also easy. Go through the hallway and into Lilium.

Lilium: Only thing to do here is just collect all four stars to turn into Gemini and face off against the dreaded sword.

6,645 Views
4 Comments
chrpa— Jayisgames needs your help to continue providing quality content. Click for details Rinnogogo in their newest game return to a melancholic, bitter-sweet story they are so good at. Your old grandma, lying in a hospital, forgot something very important at...  ...

150 Views
0 Comments
jayisgames.com— What to Study and Do from High School, Before Submitting a Resume People with good problem-solving skills, math ability, an eye for art, imagination, and good problem solving and programming skills are on the right track...  ...

How to Play Nintendo Legend of Zelda Games on PC by Using Emulators?

9 Views
0 Comments
jayisgames.com— Nintendo games are an absolute gaming delight that every console gamer craves. The latest releases of this platform are a complete package of thrill, adventure, and excitement, no doubt about that, but the retro games launched by Nintendo are...  ...