Adventurers, take heed. It's time to buckle your swashes and stock up on Dragon-B-Gone (Dragon-B-Gone has not yet been evaluated by the FDA) and strike out one last time. Spiderweb Software's iconic RPG series comes to a close with Avernum 6. Just when you thought everyone's favourite underground civilisation was in the clear, a blight strikes the precious few crops capable of growing beneath the earth and famine begins to take hold. At the same time, the lizard people known as the Slithzerikai make their move, striking at the severely weakened and desperate Avernites and sparking off a war the people can ill afford. Times like this call for heroes... and luckily for Avernum, you might know just where to find them. Never visited Avernum before? No worries, bub; this gig is strictly "no experience necessary". 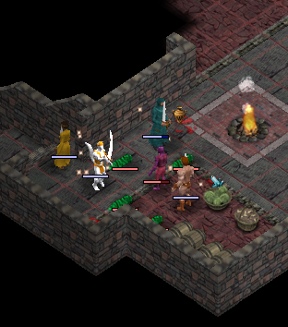 If you've never played the Avernum series, allow me to sum up the main concept for you. You strike out into the world with your party of four customiseable heroes, save a lot because you'll die a whole bunch, and engage in turn-based strategic combat with flea-ridden unicorns in between trying to pawn off the various household objects you nick from other people. You have a main quest you're supposed to be doing, but chances are you'll forget what it is because you'll get distracted by some sort of glowing mystical doo-dad on the horizon and wind up embroiled in a bunch of dungeon crawling for hours before you remember that maybe you

should get on that whole "world saving thing".

The game is a top-down-and-to-the-side view RPG, and while it offers a big heaping helping of customiseable keyboard shortcuts that may be intimidating, most of the game is played simply by pointing and clicking. Click on an area to walk there, or on an item or person to interact. Battles are turn-based, and you shift into combat mode whenever an enemy is close enough. Once the threat is dealt with, click the crossed swords symbol to shift back into peace mode and clean your wounds. The more enemies you topple, the stronger your characters will get, gaining points you can spend to increase their skills to your liking. And, of course, the bigger something is... the bigger the treasure horde it's usually sitting on top of. (Maybe. Probably.) 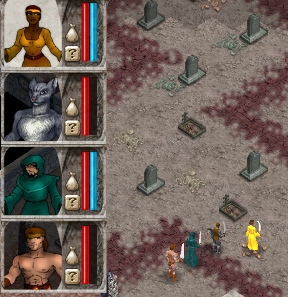 Analysis: While a younger generation will probably be reminded of most recent open world titles, us oldsters who remember when polygons were a strange new concept will probably be reminded of the early Ultima series, minus the silly author insertion. It features the same massive, open maps that you can explore however you want with your hit points as your only deterrent. They're teeming with angry enemies for us to beat expensive armor out of, and the last in the series is no slouch.

What's actually disappointing is the lack of evolution the series has displayed. This final installment was their chance to wow us with something new, and instead Avernum 6 barely tries anything different at all. While the turn-based combat does give you a chance to plan your strategies, after a while it just feels frustratingly slow and tedious, as does constantly tapping [G] to search your surroundings for items. The game looks basically the same since its initial installment, despite some minor graphical changes and improved interface, and it winds up feeling a little stale as a result. If you've played any of the previous games, Avernum's gloomy underground terrain will have lost much of its mysterious appeal, and the game just doesn't feel like it's trying to surprise you anymore. Oh, dear, is it another mushroom farm and lizard caravan? Ho, hum. Half the fun of the series has always been exploring strange new locales, and too much of where you go in Avernum tends to feel familiar.

The series continues its tradition of fine writing bolstered by a dry sense of humour. The game makes such a huge point early on about stressing that you joined the army to become a hero and how disappointed you are with your current position that it comes as no surprise to absolutely anyone when you're suddenly called upon to save the realms. And yet, because of the strength of the writing, the way the story enfolds feels quite natural and exciting. You work your way up from lowly Food Depot worker to hero as you move from one quest to another, and looking back on how far you've come is very satisfying.

While more action oriented gamers may find Avernum's slow pace and clicky combat frustrating, if a story is what you want, Avernum 6 delivers in spades with a satisfyingly epic end to the series. The main story is quite long, and tracking down every side-quest and hidden item in the game will take you even longer. Despite its flaws, it offers a whole lot of gameplay and a story of grand fantasy that neatly caps off a ten-year long legacy of classic RPG.

I've followed spiderweb's exile series, I'm actually quite surprised that they are still going, and I'm glad: they've always had a knack for that nice balance between cynical dry humour and action.

Exploration: maybe that's how it should be: a hundred miles of empty coast before you find a hidden cave.

i think i found a glitch: when i tried to get the equipment from that cabinet (after the lieutenant specifically said it was okay), the soldiers put me in jail. why?

Adam, are you sure you took the right items from the right container? If an item is something you will get in trouble for stealing, the icon has NY for "Not Yours" on it. I'm pretty sure the lieutenant directs you to a chest (it's on the floor against the wall in the room with all the soldiers and the Nephilim), NOT a cupboard, which may be why they're crying foul when you loot. :)

so where is this cabinet?

Adam, when you enter the room turn to the right. It is a chest - not a cabinet - on the floor. Happy Hunting.

A link to the developer's site would have been nice, so I could find out more about their games. Yes, I know how to Google, but still...

Well isn't one allready in the text? Here it is: http://www.spiderwebsoftware.com/
I'm a fan of the series. The writing is allways top notch, RPG creation and combat dynamics are very well made, and the demos are very large (for the current standard).
The first games in Avernum series are ancient, by computer standards, and newer is only the second trilogy, with biggest difference between those two beeing the graphic and some modern tweaks. All older games, for example, didn't have editable keyboard shortcuts at all, which was pain in the a€€.
The first I played was Avernum 3, which is the only one on the surface. The world seemd vast back then.. If you didn't want to play MMOs with bunch of unreliable companions, or wanted something bit more literate than frantic Diablo mouse-mash, Avernum was the best there was. Oh yea, and Aver3 had some 15 Mb, Baldur's Gate had 6 CDs... Gameplay experience and playtime were the same.