Whenever I see a new isometric RPG released, I usually try to size it up and figure out what the developer was going for. What did he or she envision when creating the game? It's been so long since the Diablo-era of RPGs reigned that the technology has long-since passed the necessity of isometric design, with turn-based mechanics and "3/4" top-down viewing angles. These days, when come across a game like Avernum 5, I have to wonder if we're supposed to judge its merit using a different set of criteria— such as those considered "retro" games— the way we think of arcade clones and side-scrollers, for example. Developed by Spiderweb Software, Avernum 5 serves as a good example of this trend; reaching a precipice of sorts where a game genre almost has to be developed and marketed as a retro throwback to remain viable. 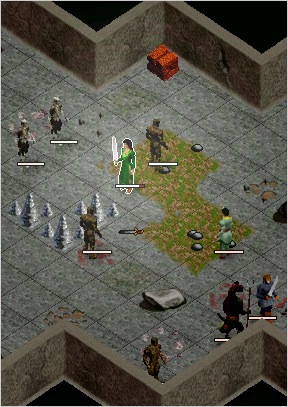 Usually I try not to subscribe to the theory that a screenshot is worth a thousand words, although sometimes, it might be worth a couple hundred. Just a quick glance will tell a seasoned gamer a few things about this game: it's obviously designed isometrically, it's a dungeon-crawl RPG, and the graphics look like something you might see on the back of a game box lying in a garage sale from a decade ago. What the screenshot can't tell you, though, are things like story-value, gameplay details and most importantly, the vision the developer had when creating the game. And after playing this game for a bit, I'm convinced it's a game of just that— vision. Not a vision of the future or the past, but simply the developer's idea of what ingredients it takes to cook up a fun game, one that they themselves would enjoy playing, "retro" or otherwise.

Avernum 5 is the fifth game in a series, believe it or not. That surprised me, because I'd never heard of it before. But lo and behold, four other similarly-styled RPGs precede it (the first three are remakes of a series called Exile, created by Jeff Vogel of Spiderweb). "Avernum" is the name of an underground domain that's home to the Avernites, a group at war with the surface-dwellers, collectively called the Empire. This time around, a group of adventurers is sent back to Avernum to hunt down an assassin who tried to kill the Empress. The story and its development is actually pretty thick for a closed-in dungeon crawler, unfolding constantly a simplified "choose-your-own-adventure"-styled dialogue.

You're given four characters to form your party, all of which you can control individually in battle. Each of them can be customized and tweaked to fill different roles, primarily as your typical melee, ranged and magic fighters. There are two game states: in-battle and out-of-battle. When you're not in battle, you control the party as a single unit, using the mouse to control movement by clicking where you'd like to go. If you're jumped by monsters (or attack them first), you enter battle. In this mode, the game becomes turn-based and each of your characters are allocated "action points," which are used in basically the same way as most other games: to move, attack, grab an item, etc...

You can use the mouse to control almost everything, but you'll probably drive yourself nuts if you try. You're given the option of using pre-configured keybinds for all of the most frequently-used actions, and most gamers will find it exceedingly tedious to not use at least a few of them (picking up loot, opening menus). As well as being able to customize the role of your characters, you'll find quite a bit of loot along the way, which adds another layer of dimension to the gameplay. Want to use a spear instead of a sword? No problem. The same kind of customization is available for magic-users, in the form of choosing specific mastery paths to follow as you level up and gain more skill points.

Lastly, underlying all those options and paths to follow, the game offers 10 classes to choose from, spanning over three races. You've got Humans, the reptilian Slith and the feline-like Nephilim. Just a few of the classes offered are Scouts, Shamans, Archers, Hedge Wizards and the obligatory "tanks," like Soldiers and Berserkers.

Analysis: Earlier, I mentioned the vision involved in a developer's creative process. When it comes to games like Avernum 5, I think it's important to try and recognize what the developer envisioned (and of course, whether or not he or she succeeded in that vision) the game to be. Specifically, my preconceptions about this genre (old, tired and cloned to death) would probably have kept me from even giving this game a shot, if it weren't my job. But then I never would have seen what this game is really about; a surprisingly-detailed dungeon-crawl/action-RPG that serves as a retro indulgence for all the old-school hack-and-slash fans out there who would rather sit down and play something that reminds them of the games they loved than many of the modern, graphically-intensive monster-RPGs trying to reinvent the wheel.

I'm not gonna yank your chain— if you're not even the slightest fan of this genre and you never have been, there's a better chance you'll get struck by lightning than enjoy this game. It's old-school R-P-to-the-G all the way; micro-managing, drawn-out reward progression and all. Avernum 5 is a bit less action-centric than many RPGs of its kind. But it excels at the other end of the spectrum, in strategy, character-building and story presentation. That's not to say you won't get anything more out of the experience than pulling out an old tabletop dungeon-runner; there's plenty of fun to be had here, and the game is decently polished. But it's one game that's definitely made for a specific audience, and I think that's exactly what the developer had in mind.

I really loved Exile... until I got online and found they had changed the color scheme to something eye-gouging. (Honestly I would have considered buying the full version otherwise.) Does anyone know where to find a copy with the deeper shades rather than the #00FFFF ickiness? Because really, all I had was the freeware, and it was tons of fun, with great gameplay storylines and details.

I played the first 3 games -- the Exile set -- before they were remade, and I still have them. I've also tried Avernum 4, though I was a bit too busy at the time to commit to a long game.

And they are long. These adventures have more subplots and side-quests than you can shake a stick at, and the writing is excellent. Not everything is of the hack-and-slash variety, either; some quests require you to collect items, cast particular spells, deliver messages, or even solve puzzles (mostly of the 'flip switches to get through maze' variety, given the game format, and some riddles).

They're definitely worth a shot if you like RPGs even a little bit. And if you want to skip the prolonged leveling and go right to the story... well, I don't know about the remakes, but the original three came with an editor... *cough* And even with maxed characters and unlimited gold, getting through the entire quest can be a challenge.

The first three Avernum games were fantastic, and I have no doubt the final two are as well. I have 4, though I haven't started it yet, and I'll probably try 5 after I have finished it (though it's worth noting that there isn't any reason one needs to play through them in order, i'm just weird.)

Oh, I love these folks. I've been playing Spiderweb Software games for ages, and it's nice to see them reviewed somewhere like JIG. They can be pretty long and intense, but are wicked fun.

I love this game, I love all the Spiderweb games. I haven't finished it yet, it is really long but totally worth the time investment.

It would be very helpful if you could put pricing information for commercial games in these reviews. I can't think of any reason not to do it.

(Thereby causing us a logistical nightmare keeping everything up to date.)

I've played all the Geneforge games they let out. They're tons of fun :D

I've been playing this game for 18 months. It's MASSIVE, huge value for money. I'm on the last area of 9 and all are very different. The plot and writing is great. The old-skool RPG honed to perfection. I love this game. It's a straight 5/5 no problems.

So are there story modes in here? Does your choices change the story, or the development of your character?

At the beginning, you're told that the Empress want to stay on a good foot with the Avernites, so you're not allowed to kill any of them. Does anything actually change if you do, other than you getting a whole lot more enemies to fight?

Themepark -- yes, your choices change what happens. More information (no real spoilers, but to be on the safe side, it's) in the spoiler section:

It's not even a Empire-vs.-Avernum thing, as there are usually three or four choices at least. There are Avernite rebels, Avernite hippies, regular Avernites, reactionary Empire guys, regular Empire guys, liberal Empire guys ... and you, possibly sympathizing with one of those groups, or maybe just in it for the money, or maybe playing do-gooder. Or jerkwad. There may be more choices. The game is huge!

It takes a couple-few quests for most of your decisions to make a big difference in the choices available to you, but it happens -- different quests, different people who'll talk to you, different degrees of information. It even matters whether you're a jerk or mercenary or nice or too fawning when you do something. The game is huge. (Some choices have an impact right away -- I suspect that if you knife your commanding officer in the face straight off that you'll have trouble right off the bat.)

I love Spiderweb games. I've played several of them, and they're all worth the cost. My only complaint is that the quest tracking system could be better, as sometimes it takes some digging to figure out where the guy who asked for the magic ice cream lived and where he said the freezer section was. You might want to jot notes in addition to the in-game note system.

I just want to reiterate something that has been said here: If you like this sort of game at all, you will be *very* hard-pressed to find a studio that gives you more content for your money. All of their games I've played so far (Geneforge, Exile/Avernum, Nethergate) have been mind-bogglingly large in (optional) scope. And let's not even go into tons of Blades scenarios people have made.

Anyway, I look forward to putting this game through its paces. :D