As young Autumn grieves the loss of her beloved grandfather, her thoughts are filled with mourning and finality. It feels like a terrible and sad end. But in the new hidden object adventure, Autumn's Treasures: The Jade Coin, Autumn will soon learn that while gramp's journey has come to an end, her story is just beginning. 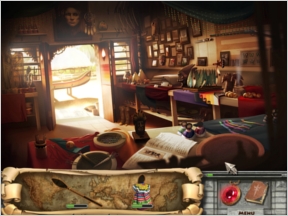 It all starts when the executor of her grandfather's estate hands Autumn the keys to his run-down antique store. Still mourning, our heroine isn't sure if she can or even wants to run the old shop, but a prompting visit from a kindly old lady and a few clues picked up while cleaning up grab at Autumn's curiosity. It would seem that her beloved grandfather managed to find himself in league with some less than pleasant characters.

Autumn also discovers a series of journal entries that point to the location of a jade coin, a particularly precious item that was intended to go to Autumn. Unfortunately, these clues were hidden inside artifacts that used to be in the store. This would have been a relatively short scavenger hunt if it weren't for the fact that most of the items in Gramps' Antique Shop were already auctioned off.

And with that you're off, tracking down the buyers of your grandfather's artifacts and chasing down clues to the mysterious jade coin. As you travel from one locale to the next, you'll be tasked with finding various objects you'll need to solve a barrage of puzzles and mini-games thrown your way. Most of the time, though, these objects will be in pieces, so refer to your item diagrams and don't be afraid to use the red jewel for a hint if you get particularly stuck. You'll also collect pages from your grandfather's journal which move the story along, provide general hints over which puzzles you have left to solve, and, at the end of each locale, provide a jigsaw-type puzzle to reveal your next location.

But beware, this is not a safe journey. Your quest for the jade coin will bring you across some nefarious ne'er-do-wells as well as an underground society known as the Syndicate... Oh, I'm sure they are known for baking cookies and giving excellent hugs. Of course they are. 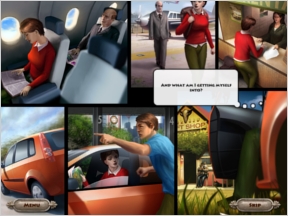 Analysis: Enjoyment of Autumn's Treasures: Jade Coin hinges primarily upon one thing. As hidden object games have evolved, several types and sub-genres have come to fruition, one of those employing a twist on the object finding mechanic. Instead of finding whole items, you are tasked with finding parts of fragments of items to create a whole, as is seen in games like Flux Family Secrets. Jade Coin is just such a game. If you just don't like the fragment finding mechanic, you may not enjoy Jade Coin. If you do, Jade Coin is a lovely entry into the field.

There are quite a few things that Jade Coin performs admirably. I found myself suckered in quite nicely by the story, and the style of object finding which doesn't allow for random items helps keep you moving along at a steady clip. Further, while the writing and voice acting trends towards the melodramatic from time to time, I also couldn't help but find the main character endearing.

The object finding itself comes with both good and bad. I love that there are no random items, and the fragment finding as mentioned above is a matter of preference, one that I happen to favor. A curious thing here is that objects are not actually placed into the scene until you've unveiled the task that would have you looking for them. Thus, items that were not there a few seconds ago will appear after you solve a puzzle. In one way this can make finding objects more challenging in that you can't have previous knowledge of an item's location. On the other hand, if you have an excellent visual memory, being able to pick out which portions of a scene have changed may give you an advantage. 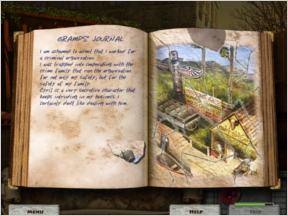 Where Jade Coin undoubtedly needs some work is in the types of objects it breaks down and has you find. Far too often are you asked to find items that are little more than a series of sticks virtually unmistakable from the other hundreds of sticks that litter any given scene. This will lead to excessive clicking, but happily there is little punishment for doing so.

I also have mixed feelings about this game and repetition. On one hand, Jade Coin deserves kudos for structuring itself so that you don't find yourself returning to the same scene over and over again throughout the course of the game. Once you've cleared a locale, it stays cleared. On the other hand, though, you find yourself getting into a rhythm that even Autumn starts joking about later on down the road.

Perhaps Jade Coin isn't Earth shattering, but it's a nicely done game in rapidly growing territory in the hidden object universe. Solid production values, steady momentum, and clever (though relatively easy) puzzles keep things moving along ever so nicely. And to top things off, I must admit that Jade Coin manages an ending that is both satisfying and opens the door for a sequel (see folks? It can be done).

I've got to say I feel this game is a little lack lustre
Im afraid it didnt float my boat...played one screen played them all.

Sorry for not being encouraging but it just felt fairly dull.

Autumns' Treasures is a good game.

"Played one screen, plays them all"
This can be said for any HOB game, maybe you should switch genre.

It said something about a sequel, someone knows if it is one? How is called and when will be ready to play?