Atom Zombie Smasher is a game about zombies. It is not, however, your typical game about zombies. Where other games about zombies might have you playing as the heroic survivor who somehow escaped infection via genetic anomaly or dumb luck, Blendo Games' latest release does not. Instead, this ridiculously innovative tower defense-like real-time strategy game will put you in the role of faceless commander charged with the evacuation of his fellow citizens. This time, you get to be the one who orders the orbital nukes! 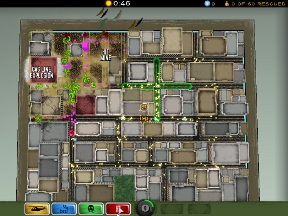 In spite of how intuitive the gameplay might be or how deceptively simple the initial missions might appear, Atom Zombie Smasher is definitely not easy. Controlled entirely via the mouse, the game consists of two segments. In the first section, you'll basically have an overview map of the territories you have to evacuate. Black territories represent those completely overrun by the zombie menace, tan indicates those that still contain a sliver of hope. Gold stars show locations you have successfully salvaged while numbered areas indicate the difficulty of the mission involved. Once you've successfully rescued a few scientists, this screen will also permit you to decide on the kind of research you want your resident geeks to pursue. It is when you've decided on a mission to execute that things get interesting.

The second part of Atom Zombie Smasher consists of a top-down look at a procedurally-generated city, something that reminds me of Google Earth's satellite's view of the world. Uninfected citizens are presented by golden squares, zombies by purple. Your mercenaries, as units are called in this game, are color-coordinated as well. Depending on what you've unlocked, each mission will also randomly assign up to three mercenaries to assist you in addition to the omnipresent helicopter, the staple of your rescue efforts. Unlike many other RTS games out there, Atom Zombie Smasher basically allows you the first move; you'll be able to determine exactly where you want your units initially positioned. Once you're done, clicking ready will unleash the horde and sent panicked citizens fleeing towards your helicopter. 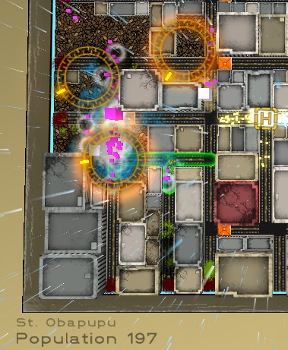 Analysis: In a word, Atom Zombie Smasher is brilliant. I love everything about the game, something that I find difficult to say about any other title out there, casual or otherwise. Most of all, however, I like that feeling of being disconnected from the events in the game. While I'm uncertain if it was intentional, there's something slightly unnerving about viewing the world from afar in such a manner. In the beginning, it's easy to empathize with the unfortunate citizens. However, as the game progresses, your goal inevitably begins to sway; the objective is no longer a fruitless attempt to rescue all living human beings but an exercise in strategic amputation. The visual presentation certainly helps that mentality.

One of the things I enjoy most about Atom Zombie Smasher is the somewhat random design of each level, something that would normally detract from the gameplay in another title but seems to bolster its effectiveness here. With only three units available to provide assistance at any one time, missions can sometimes range from pedestrian to outright 'oh my god, is this even possible?', something that keeps things from ever getting too boring.

The only thing I didn't like all too much about Atom Zombie Smasher is possibly the lack of an immediately available coherent storyline. You'll have to finish playing through the game at least once before things are laid out for you in the extras section. It feels somewhat awkward but that might be largely due to the fact that I'm used to having my plots fed to me with my silver-plated cutlery of choice. Nonetheless, it's not something that detracts remotely from the game itself; mute testament to the sheer awesomeness of Atom Zombie Smasher.

Frenetic yet tactical, intuitive yet utterly in-depth, Blendo Games' newest title borders on being a masterpiece. It even allows up to three players to play local co-op; I assume that life would be less hectic with more available hands. Though the game allows you to 'cheat' and begin life with a full arsenal, it's a lot more fun to slowly unlock each mercenary for usage. Coupled with a fairly thorough upgrade system, Atom Zombie Smasher is one of those bite-sized bits of wonder that will probably reside in your hard disk for a long, long time.

Sounds, although I havent played it yet, like a rip off of hardcore pawn's zombie city game. D/L now though.

I wish people wouldn't be so quick to use words like 'rip off' when a more appropriate description is probably "inspired by" or "similar to".

Especially if they haven't even played the game(!)

Ideas are a dime a dozen and they cannot be patented or copyrighted. If no one ever copied another's idea then there would never be the concept of a game "genre".

I said 'sounds like'... anyway, it's jolly good fun and is vast improvement on the original idea.

I'd say it's a pretty original game, that borrows very little besides the core mechanic that's used to generate, randomize and visualize the cityscapes. And the zombie theme, I guess. The actual gameplay and content are very different, though.

It's pretty awesome, too. One of the the best indie games I played in a while. It pretty much nailed the sweet spot between a (still surprisingly deep!) strategic game and a very casual nature with a slick interface and huge "just one more level"-appeal.

The strategic elements on the "city map stage" feel a lot like the boardgame "Pandemic" - which, as everybody who knows the game surely agrees - is a good thing. The spread and escalation of the infection is very well handled, and the simple choice of choosing the next sector to evacuate is an inherently important one.

The battle themselves are also very varied based on what kind of "tools" (i.e. types of mercenaries) you have to work with, and allow for a wide range of strategies. It's neither a tower defense nor an "orbital cannon click shooter" really, but something unique. It's a game where tough sacrifices are common, and a flawless victory seems all the more satisfying and important because of it.

Bottom line: if casual strategy and big re-playability hold any appeal to you, you should definitely check this out!

You just need to play the first 3 encounters of the demo to start looking for your credit card details...

Totally hooked after the 1st campaign, you "dream" little purple dots chasing the yellow ones in your home city!