Astronaut Spacewalk by Jorge Hernandez is the closest most of us will ever get to taking a no-tether trot in outer space. The delightfully complex and detailed simulation game gives you a screen filled with controls and a few simple missions to complete, then sits back and watches while you climb the impossibly high learning curve. It will take hours, not minutes, to learn how to maneuver your lone astronaut, and until you do, you'll probably feel confusion, bewilderment, and possibly a touch of anger. If you stick with it, though, you'll discover a game that shares the joys and wonders of space exploration tempered by the realism of science, and it's a wonderful experience indeed. 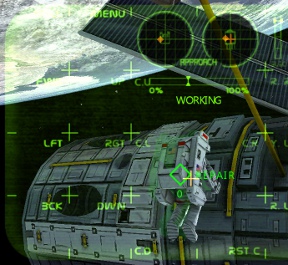 The first step to understanding this game is to take a look at the screenshot. See that green grid overlaying the action? Those are the controls. Two dozen grid spaces that fill the entire screen allow you to move about freely in space, control the camera, and perform a few other actions. The in-game manual gives you a quick overview, but since most of your time with the game will be spent learning what these spaces do, it's helpful to draw out a paper map and keep it next to you for quick reference.

Your suit takes care of which jets to fire to move in different directions, all you need to do is tell it which way you want to go. To move forward, backwards, left, right, up and down, use the modules on the left side of the screen. Pitch, roll, and yaw controls are on the right, allowing you to roll side to side, tip yourself head up or head down, and rotate around a central horizontal axis. The central panels control the camera, and you'll find the all-important "null" command in the top left corner of the screen. This useful button fires your jets so you come to a standstill, allowing you to get your bearings. Using it really drains your suit's electricity, though, so make it an absolute last resort. 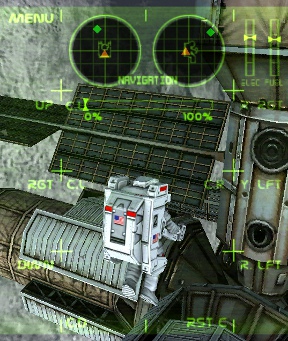 Missions in Astronaut Spacewalk range from simple "head to the waypoint" drills to repair missions and inspection outings. Simple things in concept, but getting the job done means you have to pilot yourself around complex machinery, hold yourself at awkward positions, and do everything in a timely manner before your suit's oxygen, fuel or electrics run out. Tense? Yes. Challenging? You bet. Totally worth every moment spent memorizing and practicing? Absolutely!

Analysis: Astronaut Spacewalk is beautiful but complex, frustrating but relaxing. It's a grand collection of opposites smacked together so they work as one, condensing the experience of a space walk into a mobile simulation. It's also quite a beautiful game to behold. You'll get to see some great views of Earth and our moon, as well as space shuttles, artificial satellites, solar arrays, and a host of other perfectly-rendered orbital devices. Jorge Hernandez really went all out working on the visual detail in this game, and that level of immersion makes the game feel like a real journey through space.

The downside, as you probably already guessed, is the learning curve. This isn't a game you can pick up and beat in just a few minutes. In fact, all you'll probably be able to complete in a few minutes is how to properly orient yourself to your next waypoint. The missions are long and numerous, and they're unrelenting, as well. This isn't a game that makes things easier for you. It's a game that challenges you to learn and put that knowledge to use as quickly as possible.

Astronaut Spacewalk is absolutely mesmerizing. It has the ability to completely surround you with its environment, making you almost believe you're the lucky scientist floating around in the EVA suit. It's an intense game on its own, and if you have even the slightest love of anything space-related, it's pretty much your training simulation dream come true.

Games like this aren't for me because I don't have the patience for them, but I can't help but marvel at them when I see them. I think it's so, so impressive at how intricate and complex they are, and that sort of dedication and detail is really admirable.

On a related note, my husband, who DOES like this sort of thing, recommends Space Station Sim, which was developed with the help of NASA. It's sort of like the Sims, but in space, with a much greater emphasis on maintaining a working environment and such with a lot of fine details. I guess a lot of people found it TOO fiddly and complicated, but if you're the sort of person who makes charts while they play (like my husband does), you might like it.

I really like this game, but as a sim I'd like to see a more realistic longer oxygen supply. I'd like to make a very precise run and not have to worry about rushing.