Angelica Weaver: Catch Me When You Can

So... all of time and space, everything that ever happened or ever will... where do you want to start? Chances are, for most of us that doesn't involve a desperate chase to stop a killer through time. Maybe we want a bit less "mortal peril and responsibility" and a bit more "allons-y", but Angelica, whose psychic visions of the last moments of a victim appear to take a leap back in time, doesn't have a choice. In Mumbo Jumbo's hidden-object mystery adventure Angelica Weaver: Catch Me When You Can, Angelica has her work cut out for her. She only gets called in on the worst kind of cases, when the police have their backs against the wall and are out of options... but even those don't usually involve a jaunt a hundred years or more into the past. But with a killer who seems to particularly enjoy toying with his victims and has no intention of stopping, this is one challenge where failure can be fatal. 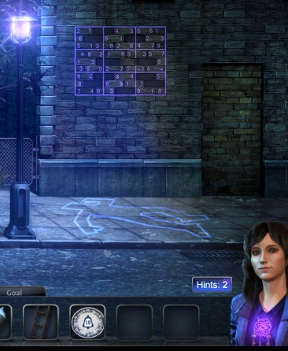 So how do you catch a killer who seems to have some unusual abilities? Why, with your mouse, of course! Using Angelica's journal and the goal tab to keep track of what you should be doing, click around to explore and look for clues the police may have missed. Of which there seems to be... quite a lot, actually. The amount and variety of which you'd expect to find if I had been the investigating officer before you came through. ("Ugggghhh, investigations are so boring. Forget this, Gravity Falls is on.") You can use a hint by clicking on the dreamcatcher Angelica wears as a necklace, and gathering more of them as you find them strewn about the game world will add to your hint stockpile. During hidden-object scenes, using a hint will allow you to select which item you want Angelica to use her magic glowy powers to locate, which is handy since some item names are deliberately coy and descriptive. When you encounter a puzzle, you can simply wait for the skip button to charge up, if you want to use your massive brain for more important things like... I don't know... maintaining your RSS feed of blog entries so you can post FIRST on each one and win the internet. 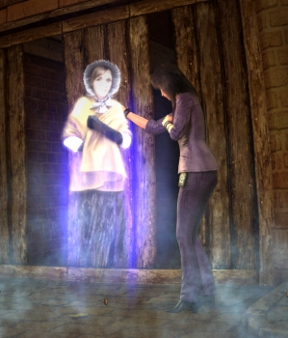 Analysis: More and more hidden-object adventures are taking steps to become cinematic in their presentation, but with an eye for detail and animation, Mumbo Jumbo's Angelica Weaver might have them all beat. It really feels like taking part in an interactive movie, and the effort put into everything from the game's tone to the way events and scenes unfold as you play rather than in jarring cutaways really pays off. Having Angelica visible at all times and react to your progress and things that happen is also a clever touch, though having to hunt for hints for her to use is a little annoying. Little things like using Angelica's cellphone as a flashlight and having hidden-object items double as clues to reveal bits and pieces of the investigation also add to the immersion. They're the small touches that mean so much, and Mumbo Jumbo's ability to have you feel like you're playing a story rather than just watching it is appreciated and impressive.

Unfortunately, the relatively straightforward gameplay is marred by some puzzles that are flat-out frustrating and awkward to solve, like an obnoxiously drawn-out footprint trail, and a stacking puzzle with oversensitive and poorly controlled physics. The game itself is gorgeous to explore and fun to play, but on the other hand, items you'll want to gather don't always stand out in clear fashion in their environments, so you'll probably fall back on sweeping your cursor around and watching for it to change to make sure you don't miss anything. Angelica Weaver: Catch Me When You Can is a gorgeous game for players looking for a highly cinematic murder mystery with a few big twists. If you value story, setting, and atmosphere, however, this is worth checking out, especially since at around four hours or more to play, it's a fairly substantial piece. Beautiful to look at and packed with engrossing detail, Angelica Weaver is one mystery that almost seems to have stepped right off the big screen.