Strap on your physics shoes (moon boots?), it's time for some quirky Rube Goldberg-like contraptions! Amazing Alex is the latest offering from Rovio, the well-known creator of the Angry Birds series. This new offering is a physics-based puzzle building game not unlike Crazy Machines or The Incredible Machine, though everything has been greatly scaled down to make it more fitting for a casual audience. 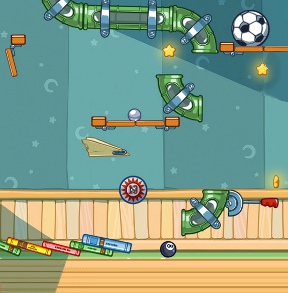 It's playtime for Alex, which loosely translates into "contraption building time"! This kid's got a grand imagination, and his room's absolutely packed with gadgets, gizmos and toys. Maybe this is where the world's hidden object games get their items from? By dragging and dropping pieces from your inventory, you can help solve each level's puzzle, with goals ranging from moving bouncing balls to a target to popping balloons with scissors, funnelling things through pipes, and using retractable boxing gloves to cause more widespread kinds of destruction.

Seasoned mobile gamers may have noticed that Amazing Alex bears some resemblance to Casey's Contraptions, a game released earlier in the iTunes App Store's life cycle. The resemblance isn't accidental, as Rovio purchased the rights to the game and reskinned it to create Alex's world. While Amazing Alex might not be a new game, per se, it's still packed with things to do, featuring over 100 levels, starting off with a lengthy tutorial and slowly increasing the complexity and difficulty of puzzles. Even better, you can unlock a level editor to create your own stages to share with friends or to use to taunt your enemies.

Physics games like this have been done before, and they've been done better and more creatively. But with the power of Rovio behind it, Amazing Alex is going to get a big push into the mobile gaming scene. And thanks to its ease of use and somewhat hand-holdey gameplay, it's easily accessible by even the most casual of gamers, young and old alike.