Allora and the Broken Portal

Note to wizards tinkering with space and time: if you're going to build a magical portal, be sure to calibrate it for humans before unleashing its unstoppable power on the universe! In the far away land of Sefirem, one such wizard failed to do this, and the high-tech portal he was working on went all wacky and trapped him inside. Now, an elfin girl and her rodent pal need a human — namely, you — to collect crystals and find the wizard, else the entire land will fall to ruin! So begins Allora and the Broken Portal, a gorgeously-drawn fantasy hidden object adventure from the folks at AZ Art development studio. 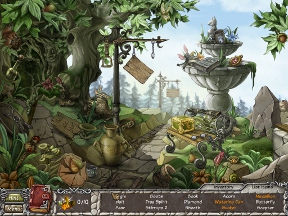 Allora and the Broken Portal blends genres together more seamlessly than most hidden object adventure hybrids, and the resulting mix of gameplay elements frees you from the constraints of unsolvable puzzles or too-difficult lists of items to locate. The game is divided into chapters, each containing three or four scenes you can wander around in freely. The goal is to find a number of crystals within these locations. Sometimes you can see the crystals right in front of your face, but collecting them is never as easy as pointing and clicking the mouse. What kind of game would be that easy, anyway?!

Each screen you visit comes with a list of items to find, all of which are cunningly hidden within the landscape. Most of the time, items you're searching for aren't as literal as the name implies. For example, if you're looking for a snake, check for drawings on the wall or carvings in pieces of wood instead of hunting for a real snake. Some items on these lists are in yellow. When you find these guys, they'll stash themselves in your inventory. Click on the inventory tab at the bottom of the screen to select and use and item. You'll encounter a number of key objects throughout each chapter, denoted by your cursor turning into an eyeball. Use the right item on the right object and a brand new crystal can be yours!

Hints are available on a recharging timer, and they're kind of tough to see once activated. Each time you use a hint, quickly scan the screen and look for yellow sparkles. They stick around for a few seconds, so you're not likely to miss them. Just don't expect neon arrows pointing the way to your next item! Frequent mis-clicks are punished by a few seconds of lost cursor control, so forget about going on a click frenzy and instead take things slow and steady. You want to calm down and enjoy the scenery in this game, anyway! 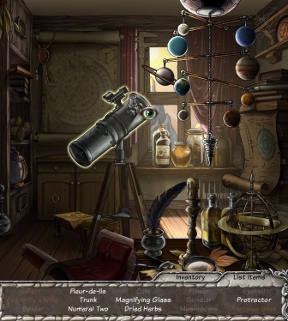 Analysis: Your first challenge when you play Allora and the Broken Portal: try not to gawk so hard at the stunning imagery that your eyeballs dry out. Seriously, no part of this game was spared an artist's lovely touch, and you'll want to smack your face against the monitor and rub these stunning colors all over your eyes. The gently moving animations, the beautifully-colored objects, it all has a very professional comic-style look to it, and even though the gameplay and story are interesting, the art far outshines the rest of the game. Which is a good thing.

Fortunately, the game is much more than a pretty face. Allora and the Broken Portal blends adventure and hidden objects together into a single experience. So, instead of sending you on a quest that's interrupted with laundry lists of items and fancy mini-games, everything is stacked in one pile, allowing you to play the game without being jolted into another genre. You can use inventory items at any time, leave scenes without finding all of the objects, and pretty much play the game the way you want to. Not bad for a linear, casual sort of game!

Lengthwise, expect around three hours of playtime with Allora and the Broken Portal, more if you're not a hidden object expert. The game never gets too difficult, although finding some of the objects takes some thinking outside of the box. Locations are repeated a few times, separated by chapters in-between, but the items are different, and the scenes have been altered, so you won't feel like you're re-treading parts of the game.

If you're looking for a game that will wow you with some great artwork, Allora and the Broken Portal ranks right up there with the Drawn series. You'll be hard-pressed to find a better looking hidden object adventure. The blended gameplay also works well, keeping the experience dynamic and interesting from beginning to end. A fantastic game you won't be able to put down once you start playing!