You are an up and coming Roman god, but you have to prove yourself to your fellow almighties before they'll fully accept you. Your task: nurture and cultivate a small group of people into a large, prospering society. Realore Studios' time management game, All My Gods will put you to the test to see if you're worthy of the peoples' prayers. But it's not just the mortals you have to keep your eyes on; jealousy reigns in the heavens when you find yourself eyeing another god's bride. Oh my! 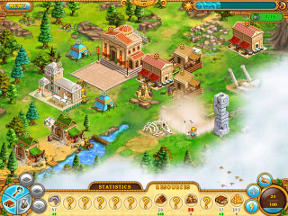 As a son of Saturn, you deserve a spot in the pantheon, but the other gods aren't quite sure if you're worthy. Jupiter, Mercury, Venus and Mars (in his own way) offer you various tasks to help direct you as you help your people build their town, expand their lands and research new technology. There's also a fair bit of resource management as you collect them for your people (when they can't produce it themselves), ensure secondary goods are properly supplied (for instance, the woodworkers need logs to produce planks) and sell any excess at the market.

All My Gods works as you would expect a time management game to work. Click on the buttons in the lower left to access the various menus for building, researching and selling. In the lower right are a wide range of special godly abilities. Once a building is complete, you can click it to upgrade it, which usually includes adding a worker and increasing proficiency. You'll also need to do this to repair it if it becomes damaged or to call all the townsfolk to it if it's on fire. You can also interact with your tiny people by clicking and dragging them so they're closer to their destination (or further away if you're one of those annoying deities). 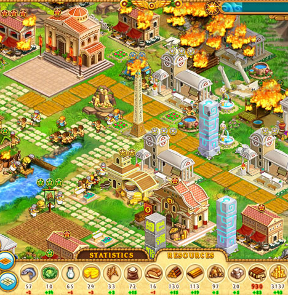 Analysis: All My Gods is a good, casual time management game. You can play it at whatever pace you'd like. Despite the existence of a few timed tasks (the penalty is always manageable if you fail) there is no discouragement in taking your time. That's not to say there's no encouragement in staying ahead of the tasks. It's oddly satisfying to have Mercury bug you to research and build a trade post after you've already done it. Plus, doing so a few times earns you an achievement, which not only advances your civilization, but also gets you a cool statue to build and show off to your worshippers.

As much fun as this game is, it's still missing a few elements that would have been appreciated. The first is keyboard shortcuts. With all the build options on the screen as well as the many uses for the Hand of God ability, it would have been nice to access these with a simple and swift keystroke instead of having to maneuver your mouse back and forth. Secondly, there are no randomly generated maps. Every time you play the game, it's on the exact same map. While this is necessitated by many of the tasks you're given, it would have been a nice freeplay option to be able to play on something different.

Despite the shortcomings above, All My Gods is still a quality game that will offer you hours and hours of fun (especially if you're after all those achievements). While Realore Studios by no means reinvented the genre, they've added a few nice touches to keep the it fresh (Praise Jupiter, you can move a building after it's been built and not just destroy it!). Simulation games often make you feel like you're a god, so why not try a game where you actually play one?