Is your current job getting you down? Does it feel like you need a microscope to look at your paycheck, or like your boss doesn't truly appreciate your creativity, knack for finding hidden objects, and aptitude at matching three or more objects of the same color? Are you at a dead end in your career? Cheer up! An exciting field is open and waiting for you as an Alchemist's Apprentice! 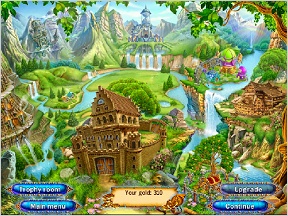 Here at our fine campus we will teach you how to use the mystical alchemy machine where you can reap tons of gold from matching up rows or columns of the same tiles. We'll sharpen that eye of yours so you can pick out a scrap of archaic paper in the midst of a cluttered desk. We'll even teach you to build towns using the gold you earn from your real-world matching skills!

But, you might ask, what kind of future is in store for you as an Alchemist's Apprentice? Well, let's take a look at the most famous Alchemist's Apprentice in history! If you'll recall the now time-honored tale, this young lad, not much different from yourself, had discovered that his eccentric uncle had abandoned the province he ruled in search of the Philosopher's Stone. In his absence the province faltered and it was this young Alchemist Apprentice that came to save the day.

Using the very same skills we teach at our fine campus, this apprentice used the gold he created from the machine to rebuild his uncle's province and follow in the footsteps of the famed alchemist himself. And now we offer that same path to you! So come, enroll in our fully accredited* facilities and turn your future into GOLD!

Analysis: The first thing that needs to be said is that Alchemist's Apprentice is most definitely not a match-3/hidden object game hybrid. Not in the strictest sense anyway. In true hybrids, the elements of differing game types are blended to create a single game play experience. With Alchemist's Apprentice, what you have is a fairly standard match-3 game with a few fairly standard hidden object levels to mix things up a bit.

As the match-3 aspect of the game goes, there isn't a whole lot of new to talk about. Various buildings will grant you the ability to accumulate and cast several spells, such as the explosive fireball or the lightning bolt which can take out a whole column or row of tiles, which is pretty impressive. There are two other things that are notable about this match-3. First, it's beautiful with backgrounds that look like they come straight out of a story book and tiles that appear to have been carved with loving detail. Second, it's not easy. At least it probably won't be easy for those of you who are not avid match-3 addicts. 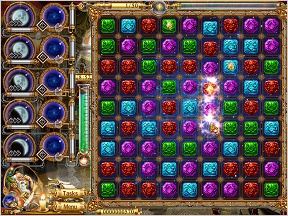 There is also a town building portion that is very reminiscent of Dreamsdwell Stories. It's considerably stripped down but offers you the opportunity to build and improve upon various different structures from time to time, each of which offers little bonuses in the match-3 levels.

The main challenge is derived from attempting to gain a set amount of gold within a time limit, and there are plenty of things to help you meet your goal. From a host of spells and a straightforward combo system to a mini-game where you take control of a leprechaun and try and catch gold that actually grows on trees. Still, with these things to aid you, passing a level on your first try can quickly become a challenge. Luckily you can use your previous score to buy more time, allowing subsequent attempts to be a little easier.

The match-3 aspect of the game really hits its stride once you have constructed all of the buildings in the town and leveled them up a bit. That's when all of the special effects really start to take hold and the manic combos that follow will have any match-3 enthusiast giggling with glee. As for the hidden object aspect, there are few levels to play (one for every ten match-3 levels), but they are rather nicely done, and at least the objects you are sent to find make some sort of sense (as opposed to looking for a hotdog in a medieval castle).

No, Alchemist's Apprentice doesn't exactly rock the gaming world, but it quickly becomes highly addictive and, if you're a fan of match-3 and hidden object games, this is definitely a fun entry that provides both.

* Note: Accreditation at our facilities is currently only recognized on campus grounds.

You can see how much love and devotion went into making it. Every single bit of it feels fresh, original and completely unique. I see myself playing it again, and again, and in my old age reminiscensing of it with teary eyes and a lump in my throat. Ah, grandchildren of mine, I remember when I played Alchemist Apprentice, those were the days. The BEST of days.

Seriously, I cannot express my amazement with this game enough. So many novel and fresh things to do! You get to search for three gems of similar color which makes them disappear and lets you search for ANOTHER three gems of similar color, and again and again! Bliss! But that's not all.. you also get to search for objects that are hidden, and one can never get enough of objects that are hidden! Finally, the game has tons and tons of wonderful features, like plenty of colors, beautiful, beautiful sparkly effects, explosions and other fun sound effects and lots more which makes the replayability positively infinite.

I want to rate this game, but I really need a 6th mushroom for it. 5 mushrooms just doesn't seem enoughfor such a stellar, and, might I say, sublimely divine experience.

My hazard meter is reading "sarcasm". Has anybody seen any sarcasm around here?

Wow, their title when combined with the little banner graphic at the top is a TOTAL rip on the farseer trilogy by robin hobb. First book title is assassins apprentice and the cover of the second book is a young man with a staff in one hand, arms spread, and a wolf howling: http://www.amazon.com/Royal-Assassin-Farseer-Trilogy-Book/dp/0553573411/ref=sr_1_2?ie=UTF8&s=books&qid=1239474828&sr=1-2

I think it's the same graphic, just altered a little in photoshop and with a cape added :P

[Edit: That's uncanny. I highly doubt it's a photoshop work, but I'm willing to bet the artist for the game's title screen used the Farseer illustration as a model. -Jay]

I'm actually thinking the game is paying a bit of homage to Hobb's Farseer books, too, if it isn't ripping off of it. Not only the cover art/banner similarity, which was the first thing that came to mind when I loaded up JIG's main page today, but the title (first book, Assassin's Apprentice, game title, Alchemist' Apprentice) and background story: the books' protagonist has a fairly unusual, if not quite eccentric, uncle that goes questing for a mythical race in the third book in the series. The third book is also the one with the cover art/banner similarity.

Not that I've actually played the game yet. I'm tempted to, just to see how far it flirts with Hobb's series. Probably not much more than that, though. The Farseer trilogy isn't really... fancy bright colours storybook fare.