It's been more than two years since the phenomenal time management game Airport Mania: First Flight was released. How do you follow a game like that? With Airport Mania 2: Wild Trips, a release that matches and beats its predecessor in every way possible. Not only is it rare to see a game this all-around good, but a sequel that carefully hits every mark is practically unheard of. Get ready for more landing strips, fueling stations, and cute, big-eyed planes in this amazing follow-up! 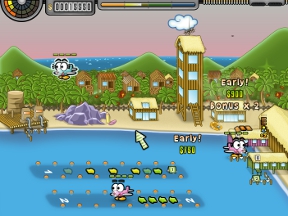 The basic idea is to get everybody where they need to go as quickly as possible. Planes fly in at the top of the screen, so you simply click them and tell them which landing strips to approach. Once on the ground, send those adorable little things to unload and pick up passengers, refuel, or whatever their needs may be. When all is complete, click the plane and direct it to a free landing strip to send it back to the skies!

Naturally, you never have the luxury of dealing with just one plane at a time. The skies are full of different vehicles, some that are very needy, some that are sluggish, some that need urgent assistance, etc. It's a constant tangle of planes swapping positions and waiting on other planes to finish their tasks before starting their own. It's never unmanageably frantic, only pleasantly challenging.

The challenge and strategy comes into play when you incorporate combos and points multipliers. Planes have unique colors, and, for example, if you direct a pink plane to a loading dock, the dock turns pink. When that plane leaves, if you send another pink plane there, you'll get a score multiplier. Keep the same colored planes visiting the same buildings and you'll earn an expert score in no time. You can also earn multipliers by keeping frequent same-direction traffic going on the runways, something that's a bit more difficult to pull off, but the rewards are worth it!

Upgrades are massively important in Airport Mania 2, and what you decide to buy with your cash deserves some serious thought. The store is available after each level, and there are lots of things to choose from. The selection varies a bit depending on your location (there are ten airport environments you'll visit, which is nice!), but basically you'll have the option to upgrade some of your structures so they work faster, add new amenities that keep passengers happy for longer, or buy new gizmos that help you play and plan, such as granting you the ability to see the color of upcoming planes. Spend your cash wisely! 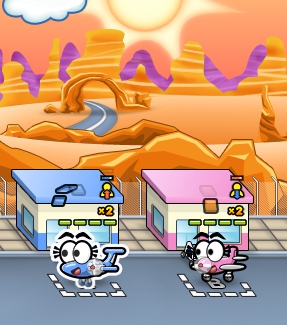 Analysis: Lavishing praise on the Airport Mania series almost seems inefficient. The series is tightly constructed to provide a balanced experience from beginning to end, allowing you the luxury of scaling your challenge level as high or low as you like as you strive for a better score. The visuals are great, it's so fun watching the planes blink and smile at you (or scowl when they've been waiting too long), and the little extra touches here and there really make things pop.

Airport Mania 2: Wild Trips is a huge game, featuring well over 100 levels in the Premium Edition we reviewed. This will keep you busy for a solid 6-8 hours, easy. And even though the gameplay is confined to one mode, you'll never feel bored or unchallenged in this extremely well-balanced game. It's all fun, all the time.

As with the original, some possible depth of gameplay is downplayed by a lack of visual cues. Airplanes come in all different types, ranging from big passenger planes to puddle hoppers, and each has slightly different attributes. It's difficult to tell the planes apart by a quick glance, so most of the time you treat them all the same. It doesn't dilute the game one bit, but it's still a missed opportunity to make the game even more interesting.

A phenomenal sequel and a grand release in its own right, Airport Mania 2: Wild Trips is the time management game to play, plain and simple. Be sure to check out the original Airport Mania: First Flight, also available for your iOS device.

Love this game! Has anyone figured out how to give the flower to the monkey in Africa (stage 6)?

re: raerae -- To get the flower to the monkey, do the following:

thanks kh, got it

are you supposed to do anything with the carrier panel that the screws pop up / panel flys off of in some stages of level 5?

Keep screwing the screws back in on level 5!

anyone notice a little floating shadow in the bottom left hand corner at the 2nd airport? i can click it and something pops out of the water, but then i can't click it again. what is it and what does it do? am i somehow supposed to keep it on screen like the hot air balloon or get an award like for the bunny in the 1st airport? also, i can't find the witty clickable background comments in the 2nd airport. anyone found them?

Anyone know how to purchase a plane license??

Does ANYONE know when or if Airport Mania 3 will be out???? I love this game as does my sister and my 5 year old grandson. We love both 1 and 2, but 2 is better. We have played and replayed several times. Dying for Airport Mania 3..World Traveler ( I think I read that somewhere).
Thanks.

CS, I understood that purchasing a plane license meant buying the plane in the shop. It provides more cash for landing and taking off, but it makes it harder to get supreme or perfect on levels because it is usually less patient and takes longer to process.

how to get hidden planes (stage 2 level 8) please answers