Ever have a strange dream where you were actually a playing card? Then a peacock was talking to you? And so were other cards? No, this is not Alice in Wonderland. Welcome to Age of Oracles: Tara's Journey, a calm and relaxing adventure/hidden object game hybrid. 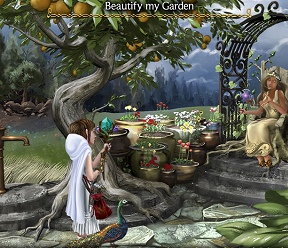 Designed by Jolly Bear Games, Age of Oracles takes you, as Tara, on a journey through the major arcana of the Tarot. Meet the Emperor, the hanged man, and many other colorful characters as you wind your way through a fairy tale countryside gaining wisdom along the way, all with the help of your guide. When you come to the end of your journey will you have gained anything? That's up to you to decide.

Age of Oracles: Tara's Journey has gone to great lengths to make gameplay enjoyable. The artwork is beautiful, bright, and very much like wandering through a fairy-tale. The music has renaissance overtones, and perfectly complements the calm gameplay. The mini-games have all been done before, but rarely this beautifully. The three major mini-games that are played between each level are a perfect example: gorgeous tarot cards of the minor arcana set against a beautiful red background. Lovely to look at. 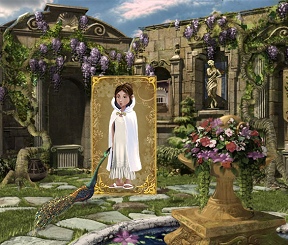 Analysis: Yes, yet another adventure/HOG hybrid has joined the ranks. Instead of going the route many have gone: action, adventure, mystery, spookiness, etc., Age of Oracles: Tara's Journey takes a different tack, an almost Zen-like calm. Between the art, the music, the incidental sounds, and the soothing dialogue this is the type of casual gameplay that relaxes nerves rather than jangles them. It is, in fact, much more fun to play in small chunks, a chapter at a time, rather than rushing through the experience. It is also nice to see the "reverse" variation on HOG, something you don't see all that often.

Hints are on a refilling timer, and it refills fast! Other than a red 'X' showing up, there are no apparent penalties for incorrect clicks in the HOG sections. Hints can be used in adventure/puzzle scenes as well as both regular and reverse hidden object sections. This makes gameplay quite simple and, occasionally, a bit too simple.

The three major mini-games played between the chapters get more complex as you get further into the game, but it can still get a bit repetitive. And of course, the subject matter can be a bit tricky, as some folks think that the tarot is... well, perhaps evil is too strong a word, but there are some who might find a game based on a superstitious fortune-telling device to be a bit distasteful.

Why are you wandering through the major arcana? Why a talking peacock? What does it all mean? Not all of these questions are answered. Instead, you are gifted with a peaceful, enjoyable wander through a fairy-tale landscape, picking up little gems of wisdom along the way. Is it worth playing? If you like hidden object titles and are not looking for a pulse-pounding experience, absolutely!

I bought this game from Big Fish a week or so ago. A very well done game.

What exactly is a reverse hidden object game?

I think she means the scenes where you have some items in your inventory, and you then have to find out where in the scene they must be placed.

Oh I get it it's like Oracle of Ages except reverse hahahaha. Sigh...

ThemePark has it right, a reverse HOG scene is one where you have items to place into the scene, rather than finding and extracting items from the scene, which is a regular HOG scene.