Age of Enigma:
The Secret of the Sixth Ghost

A g-g-g-ghost! More than one, even! Actually, the mansion Ashley finds herself called to is practically heaving with spectres, all of them with unfinished business, and a mysterious being informs her that she is the only one who can set them free. Age of Enigma: The Secret of the Sixth Ghost is a point-and-click adventure from Casual Box. It looks stunning, almost like a playable Saturday morning cartoon (readers aged 30 and over, that reference is for you!), and even though the puzzle elements are a bit thin, the game manages to paint an atmosphere of intrigue that draws you right in. 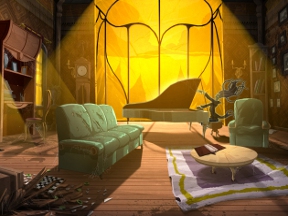 For starters, Age of Enigma is about as close to an adventure game as any casual game can get. There are no hidden object scenes of the traditional sort (i.e. find a list of items to proceed), over two dozen mini-games, and plenty of inventory items to find, combine, and utilize. All you need is your trusty mouse and a button to click and you're ready to go. The cursor changes to indicate actions you can perform, such as walking to new rooms, interacting with items, or just getting some more information out of a curious sight.

Your job is to walk around and help out half a dozen souls who have become trapped in this realm. That's a real bummer for them, but since it's pretty easy for you to lend a hand, you might as well. You'll encounter a handful of moderately-frightening things in the game, a few of which are really bone-jarring in nature (giant eyeball in the keyhole, anyone?). Most puzzles can be completed by visiting a few adjacent rooms, so backtracking is practically non-existent, even though there's a map and a diary to help you keep track of things. A few broken things to find, a couple of items to assemble, and you get to call it a successful ghost-helping session! 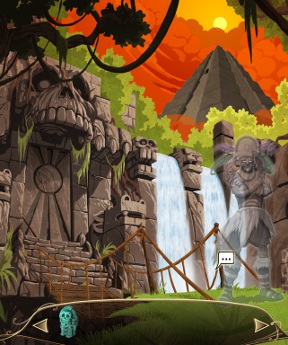 Analysis: Visually, Age of Enigma: The Secret of the Sixth Ghost is beyond captivating. Seriously, try looking at one scene in motion and then walking away without looking at a few more. It's a gorgeous game, with artwork that would be right at home in a finely-crafted graphic novel.

The gameplay, unfortunately, is way too easy, and all but the most inexperienced casual gamers will breeze through the game in three hours or so. Puzzles are pretty much spelled out right in front of your eyes, and if you're stuck, there's an in-game guide to unstick you. Ghosts are quite helpful and your diary fills in any blank you could possibly imagine. Plus, every mini-game is skippable right from the start. And that's on the free-roaming "hard" mode!

The Age of Enigma soundtrack is available for download on iTunes!

Age of Enigma has the visual punch necessary to stand out from the crowd, but pieces of it feel awkwardly incomplete, almost as if it were rushed out the door to meet a deadline and someone forgot to add challenge. More time in the gameplay incubator would have done this one well! Still, this is the perfect sort of game to receive a sequel, as the developers have some room to improve on an already promising concept.

Age of Enigma: <br />The Secret of the Sixth Ghost Walkthrough now available!

Age of Enigma: The Secret of the Sixth Ghost Walkthrough

Age of Enigma: The Secret of the Sixth Ghost Walkthrough