Imagine what gaming was like in your great-grandmother's day, before instant downloads and online puzzles. (Don't worry, we're just imagining—you can hold on to your mouse!) You might turn on the radio, or even more simply, open a book: a mystery book. Say, one by the legendary Agatha Christie. Let's say, "Peril at End House." As soon as you open the book, you find yourself sitting alongside Hercule Poirot in a quiet coastal resort, one filled with odd characters, art deco signs, and Victorian nostalgia. 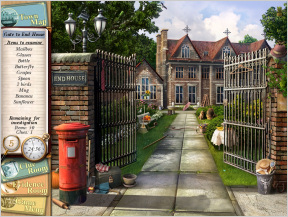 Soon, you meet a beguiling young woman who calls herself "Miss Nick" and claims, rather nonchalantly, that she's come close to death three times in as many days. As you and Poirot listen, glancing about the scene, you realize something isn't quite right. Stories don't quite match up. Odd clues are scattered here and there. Suddenly, there is a murder. Before you know it, you have a mystery on your hands.

At first glance, Peril at End House may seem like a typical hidden object game, complete with mini-puzzles. As you enter a scene, you are given a list of objects and 25 minutes to find them. However, unlike many games of this genre, you are not searching for random bits of clutter. You're looking for clues: bits of shredded newspaper, knick-knacks which disguise secret compartments, murder weapons and motives. In the meantime, you'll find yourself drawn into a twisted plot, presented as clue cards and comic book panels. As you piece together these hints and clues, a surprising story emerges — one that could only have been conceived by a master of mystery like Agatha Christie. 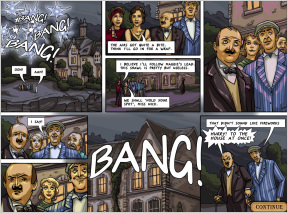 Agatha Christie: Peril at End House is a pleasant blend of casual gaming and classic mystery. Often, hidden picture games can seem dull and repetitive, with contrived plots that quickly fall flat. This is not the case with Peril at End House. Even if you guess the solution to the mystery early in the game, Christie's clever twists and turns might lead you astray. The blend of art styles (detailed landscapes that are not quite still, period objects with art deco details, interrupted by comics and mini-games) gives the game a clever, eclectic feel—not unlike Christie's strange characters.

If you aren't quite curious enough to download this blend of modern gaming and classic mystery, consider this: In 1932, when Peril at End House was first released in the U.S., a copy of the paperback novel cost $2.00. Adjusted for inflation, that same novel would cost over $27 today. For the mystery lover, the price would be worth it. For the frugal gamer, this quick download is a bargain. Please, enjoy: Agatha Christie: Peril at End House.

Peril at End House is available to download from these affiliates:

I've had this game for a while, and it's quite good. The problem I had with it is that it seemed short. Shorter than the first one at least, unless I'm just getting better. Anyone looking into purchasing this should buy the first one first. And if you're a fan of that one like I am, then buy 'Peril at End House'.

Great fun, but, at $19.99, a bit too expensive for the length of time it lasted. Beautiful artwork.

I enjoyed this game, though compared with the other Agatha Christie PC games to download it is a bit short. My favorite is the Murder on the Orient Express PC game, as it has more involved puzzles, mini-games and is longer.