A Story of a Band

Hey little rocker! Turn that frown upside down. Just 'cause you don't have any talent... or fans... or fame... or job security... doesn't mean you can't turn into a musical legend! To those about to simulate... Hot Byte Games salutes you with A Story of a Band for Android. If you thought Game Dev Story was good but needed a bit more of a Tenacious D sort of vibe, then this power ballad's for you. You may start out as a bunch of tone-deaf nobodies, but with a lot of practice, a lot of schmoozing, and the determination to not only rock and roll all night but also party every day, you will rise from obscurity to be the sort of star all the little flannel-clad YouTube bands want to emulate years from now. To win, you're going to have to defeat all the bands who rejected you in glorious rock battle... but you've got a long long way, baby, before you can even attempt that. 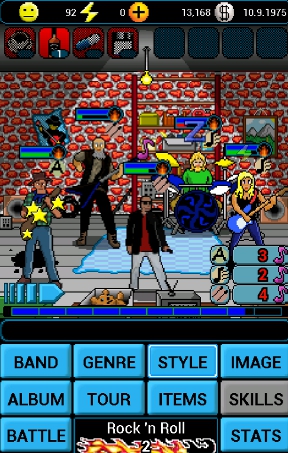 Start by selecting your five bandmates from the pool of available candidates, paying careful attention to the skills and perks they bring to the table. Someone might be an amazing songwriter, for example, but also greedy and demand more pay than anyone else. After that, it's time to decide what genre you want to play as... some types are more popular than others, while some allow for more creativity or a more aggressive style of music. Most of the hard work takes place in your training house (which I suspect is somebody's mother's garage) where you can decide what to do with your band. This can be anything from working on a new album, going on tour, battling another band, or manipulating your style and image. Money talks, so some options, and the tiers within, are more expensive than others, and since you also need to be able to pay everyone's salary it's important to balance your spending with your earning. Somebody's going to have to pay for all those champagne pool parties and televisions tossed out hotel windows. You're professionals after all.

Sure, you might not have much when you start out and have all the musical talent of a half-asleep cat having its paws moved over a keyboard, but hey, quitters never prosper! Don't let the poor reviews you'll be subjected to at first by magazines discourage you. As your band hammers diligently away at their music, their skills will go up, and you'll earn two types of points to spend, skill and development. Skill points are generated automatically and used to purchase new abilities and genres, while development points are earned from battles and producing albums, and should be sunk into your band to level them up. It may be hard and require a lot of dedication, or even a bit of luck, but you'll be a rock legend in no time... though I sincerely doubt you'll ever be able to match the runaway success of my band's tender power ballad, Everybody Farts. Stop looking at me like that.

Make no mistake, A Story of a Band is heavily inspired by Game Dev Story's gameplay structure (if not as easy to jump in to), but it would be a mistake to call it a clone. It's definitely going to be familiar, yet it adds enough new options over just the different theming to be considered its own beast. You can expect a lot of failure in the beginning as your band struggles to learn which side of the guitar to play, but the quirky tone and goofy, vibrant visuals will do a lot to keep you playing if rock is already your thing. Since the game relies on a lot of silly musical in-jokes and parodies for its humour, you do kind of need to be at least a passing music fan to get the most out of it, and also be willing to tolerate the more eye-rollingly immature stuff. There's no mistaking that there was a huge amount of effort put into A Story of a Band though, and if the trial version manages to get its hooks into you, you'll find it hard to put down.

A Story of a Band
(iPhone, iPod Touch, iPad)

A Story of a Band Demo
(Android)

A Story of a Band
(Android)

NOTE: This game was played and reviewed on the HTC One S. Game was available in the North American market at the time of publication, but may not be available in other territories. Please see individual app market pages for purchasing info.

I just want to say this game is DAMN good.
Done.