A long time ago, in a galaxy far, far away... er, well, a long time ago, anyway, there was a Magic Kingdom where the basic elements, earth, air, fire, and water, were in perfect balance and the people in the kingdom lived in peace and harmony. Then, something dreadful happened and the elements went out of control, wreaking havoc across the land and its people. Fortunately, that balance was restored and everything went back to normal. Except, whoops, it's happened again. Playrix Entertainment has come roaring back with a sequel to one of the most engaging match-3 games ever, 4 Elements. Once again the elements are out of whack in the Magic Kingdom and it's up to you to make things right before all life ceases to exist in 4 Elements II. Prepare for tons of elemental delights! 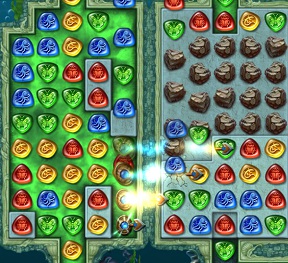 The basic premise of 4 Elements II is that the aging sorcerer who guards and protects the elemental book of magic has weakened, losing control of the elements thus causing tons of natural disasters. Even worse, the fairy of each element has been trapped in the ensuing chaos and nothing can be done about restoring the natural balance until those fairies are freed. Once they are, they can aid you in finding the people and creatures of the element, eventually getting everything back to normal.

4 Elements II is broken up into four main segments, each beginning with the freeing of the elemental fairy. This opening chapter plays like a mini adventure/hidden object hybrid with lots of object pieces to find and puzzles to solve. Once the fairy has been freed she leads the player into the meat of the gameplay, the match-3 action, which is the "chain drag" type of match-3. Within each elemental segment are four people or creatures that need to be found and restored, requiring four screens of match 3 madness per creature. The weakened fairy will "light" the elemental magic at one end of a map, and it is up to the player to create a path for the energy by using the matches to break through the ground to allow it to flow to the elemental altar at the other end of the map. When the altar is restored the game moves on to the next map until the creature has been identified. Once that happens another mini-game pops up (one of a variety including hidden object scenes, spot the differences, swap jigsaws, and other puzzles) to completely restore the creature. 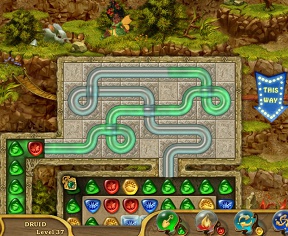 While the heart of the gameplay is the match-3 boards, even these are not your usual match-3 challenges. To begin with, rather than being forced to break all the "tiles" in the game (which is usual in most match-3s), all the player has to do is break enough for the magic to flow through to the altar. Unfortunately, the way to the altar is never really a straight path, and it includes a lot of twists and turns along the way. Eventually the maps will also contain certain obstacles which are themselves mini-games: pipe puzzles, block sliders, and twisting ring puzzles that need to be solved during the match-3 round before the magic can move along. There are the usual ice and stone obstacles to be found, along with helpful pockets of arrows and landmines which, when activated, clear paths as well. To round out the help are four different power-ups which are filled by making matches of certain colors and which affect the board in different ways.

Analysis: If you've played the original 4 Elements and think you know what to expect in the sequel, think again. While the original was fantastic fun it was also pretty static and predictable: play four rounds of match three, then solve a "spot-the-difference" puzzle. Not so with 4 Elements II, which throws in so many mini-games, hidden objects scenes, and the like that it seems to have created its own unique niche of gameplay, the match-3/adventure/hidden object hybrid. 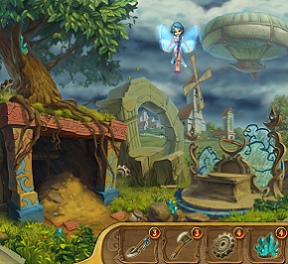 The graphics and animations are bright, clear, and cartoony from the intros and the cut-scenes to the actual gameplay itself. The game pieces in the match-3 rounds have very distinct colors and, if the player is colorblind, each has its own distinctive pattern which makes them easy to differentiate. The action is lively with the bursting of the tiles, the explosions from the arrows and landmines, and the ever-present fairy flying around (along with cute background animations matching the element that is being restored). Major effort has gone into making 4 Elements II a visual feast at every turn.

The gameplay itself is match-3 madness at its finest. The action is smooth, the challenges become trickier as each level progresses, and the interspersed mini-games keep the match-3 action from becoming too tedious, especially in the upper rounds with the progressively larger maps. The option to play in either timed or untimed mode helps make 4 Elements II fun for both those new to match-3 play and experts looking for a challenge.

With its "everything but the kitchen sink" approach to gameplay, 4 Elements II is poised to appeal to a wide audience, even those who don't necessarily like or who have never played a match-3 game before. Stunning visuals, absorbing gameplay, and enough variety to keep it interesting make 4 Elements II a must-have game, fun for all ages.

The link for the review of 4 Elements is broken... D:

I swear I've been waiting for years for this sequel! To give one an idea of how often I play the first: one playthrough nets around 200 million points. My score, *after* I wiped my hard drive and re-installed the game, is in the billions. Plural. Again. It was in the billions before the hard drive crash, too. It's about freakin' time a sequel came out.

I love the new mini-games, both in-maze and for picture "fixing", EXCEPT the "traffic control" game. (Slide the blocks around each other to create a path to the exit, except the blocks all get in each other's way.) I freaking HATE that puzzle, always have. Otherwise, I love it.

Especially charming is the tongue-in-cheek attitude the game takes towards itself, now. Any infusion of goofy gets a thumbs up in my book. (Most people think my book could use a little less goofy, though.)

Is the game also getting impossible when you come near the end, as in the first one?