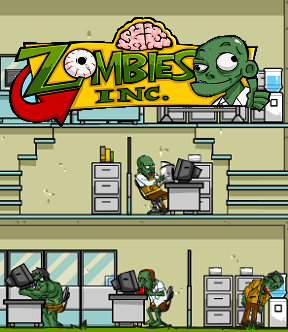 As the sun sets, they stream into the streets of the big city. Their pale skin, gaunt frame, and soulless eyes give them away, as they lurch from place to place, searching for their unholy sustenance. But enough about salarymen, this is a game about zombies! Okay, it's about zombie salarymen, which is frightening enough in itself. Zombies Inc., a time management strategy game by Aethos Games, shows just how difficult in can be balancing the demands of a multi-national corporation while still maintaining satisfying progress in your quest for undead-based world domination.

The goal of Zombies Inc. is to acquire enough money and build a large enough zombie army to take over the world. The game is controlled entirely with the mouse, and is mainly focused on four department. First is "Zombies" which is where you grow and upgrade your legions of the undead. Then there is the "Attack" screen, where you designate your attacks, all the way from Santa's Workshop in the north to Penguin-oplis in the south. The more territories you conquer, the larger the zombie population there'll be in the world. Said population is the main market for your "Sales" department, where you'll earn money by researching and releasing new products. Finally, there is the "Company Upgrades" screen, where you purchase bonuses to help out your entire company. In each department, you may hire more employees to unlock and upgrade different zombies, attacks, and products to sell, but doing so will cost money, so make sure that you stay in the black. If you don't... well, you'll see red in more ways than one.

The combination of business simulation with zombie wackiness is an premise with incredible potential, and Zombies Inc. takes quite a good stab at it. The presentation is solid, it's addictive as all get-out, and there's just something hilarious about seeing a zombie in a suit getting hanging around a water cooler or shaking a computer in anger. However, a number of nitpicks pervade the experience: the mechanics of gaining money and fighting battles seem unnecessarily obfuscated, which can lead to your armies being decimated or your finances drained without exactly knowing why. The cash flow balance feels off, meaning that often there best strategy is just to wait around while the numbers go up, rather than, y'know munching on the populace. The event pop-ups are annoying, and almost always seem to involve humans retaking a city over and over gain. Finally, and this may just be based on expectations unfairly gleaned from other casual games, but Madagascar goes down way too easily. We all know that at the first sign of any kind of virus, those airports are getting shut down.

If the whole of Zombies Inc. doesn't quite measure up to the promise of the sum of its parts, it is still very engaging and fun to play. Lovers of zombies, time management games, and the union thereof should get ready to have a couple hours bitten away.

Make sure you have at least 3 days worth of expenses stored. You can check by rolling over your money in the lower right. I was plowing through countries and would have won easily I think, but then a stupid random event made it so I would not receive revenue for 3 days. Grrr...

Wow... the upgrades are very nonlinear. I zoom along until I need corporate capacity lv 3, but it's really expensive. Then, EVERYTHING costs so much more afterward. $35K for a new employee? And you can't expand much without it, because you can't make major inroads to S. Asia, S. America, or C. America without that upgrade.

Make sure you bank a HUGE amount of money before you buy that upgrade, which will take a lot of just sitting around.

Fortunately, my game seems to be in a buggy-mode where there are no random events. Otherwise, this waiting to build up a nest-egg would be insane.

And why is my zombie population starting off negative?

I agree, that level 3 upgrade is killer. Lets just dash your income, then skyrocket your cost for further advancement... It does not feel balanced at all. Unless you are supposed to sit there for 5 hours and build up a million dollars before purchasing it... Its absurd. You shouldn't nosedive in effectiveness because you got an upgrade...

Ah... once you realize that you can upgrade your TROOPS too, you're never really at a loss for something to do.

Upgrade the berzerker fully and you'll be able to go a long way without having to upgrade your business.

Thanks everyone for your feedback and to JayIsGames for the review! I just wanted to let everyone know that a sequel is in planning right now and your feedback has been heard loud and clear! Zombies, Global will be a super awesome game! Thanks for playing and supporting Aethos Games!

Not having a population count, even an inaccurate one, for locked territories is awful in terms of planning command upgrades. If I don't know I need a larger army, I can't plan ahead as effectively. Basically requires playing the game over.

Yes, much easier when you realize you can upgrade them! I saw later that it did say so in the text (when you lose a battle) but I think the main take-away for Aethos Games here might actually be that people don't read things they're not forced to (ie, the tutorial makes you do it)...

Also note, there's a bug wherein if the event window pops up exactly as something else is happening (for instance, when I was starting my very last battle before winning the game), you miss being able to read the event, and things on the other screen lock up and you can click to other screens, but not do anything. The battle, if you're in one, never progresses. However you can pause/unpause and it starts to work again. (I wonder if it's because maybe the event window forces a pause?)

Just beat the game. It's actually pretty easy once you figure out a few simple rules. First, and most important, don't upgrade anything unless you fail an attack at a city with the maximum amount of your best kind of zombie. Buying too many expansions and upgrades is how you soak up all your revenue. Second, don't use anything other than fully upgraded Meatheads for the first half of the game. Yes, you'll have heavy casualties, but casualties don't matter. Once you're able to buy Tentacle Zombies, they should become your go-to zombie. The exception to this rule is the specialty zombies. Russia, the USA, and Europe have zombies that work especially well in those territories. Make sure your army consists exclusively of those zombies when fighting in that area. Also, remember when buying upgrades that Revenue Stream and Sales upgrades pay for themselves, while Army and Research upgrades cost big money over the long term. Finally, the humans retaking cities is a good thing: if you have captured a city before, you can do so again, so it is essentially free money. Check your revenue and expenses regularly to make sure you're not losing money, and you should win in no time.

At first this game seems complex, but after I unlock China, I realize a way for quick win.

Neglect the defense bar, as long as your pop and attack is better than the enemy, you will win the battle. So, a fully upgrade berserk zombie is for the win, and then just skip everything to last hero zombie (if you got the money) or follow the continent-exclussive zombies.

As for survival, do not upgrade employee capacity unless you are sure can't attack anyone with current pop, and quickly upgrade the marketing department to max when you do.

Thank you for the entertaining game psyduck (yes that is you aethos).

RobWatts, this stupid random event happened with me too and I will not receive revenue for 3 days starting now....
There is something that I can do to stop this?? I will really wait 3 days to play it again???

I think that means 3 in-game days.

After 5 days a tried to play it again...
In the beginning the revenue still stopped but when passed 1 game day, the revenue normalized.

You need a population of zombies to sell your products to. Not a glitch, just a game mechanic that isn't spelled out that well.

I personally did not enjoy this game. While fun at first, the upgrade system was hideously out of scale, and it seemed that my rewards were linear while the costs were quadratic. It soon became impossible for me to advance, and I was left with no options for backtracking. I eventually wen bankrupt, and had to start over.

It's really too infuriating to be called a casual game, while too tedious and hands-off to be anything but. It's rather confused in what it's trying to do.