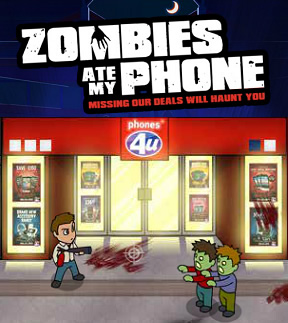 Zombies Ate My Phone, a Phones4U advergame developed by KokoGames, isn't the first top-down zombies shooter we've ever featured on JIG. It's probably not even the first top-down zombie action shooter we've featured that's set in a mall. However, it is, in all probability, the first top-down zombie action shooter we've featured wherein you can chuck vintage LPs at a mummy. And you know what? Sometimes that's enough. Well-programmed, with an appropriately goofy sense of humor, Zombies Ate My Phone won't win any awards for genre innovation, but it's addictive and has the right inspirations. Its cartoonish art and movie-styled soundtrack are definite plusses, and, altogether, it makes for some quick, brainless fun... or should that be braaaaaainless?

I am going to assume I am just early to this post, but the link to the game does not work - it 404s me.

Link does work now :) And I really like how there is the option for keyboard only play!

This looks a lot (by the image) like a zombie game side-scroller where you can ride vehicles, change weapons and every time you lose, it was a dream. Can't remember the name.

So, what is the point of the friends you save? That was an interesting concept; pick which friends you have to save. And as far as I can tell, that just changes who calls you. It feels like wasted potential.

I kid you not, the Ghost Child boss calls "Zeus" in a high-pitched voice.
Zule~